Optimize Your Health. The Backstory Cells are the smallest unit of life — and the average human body has trillions of them. 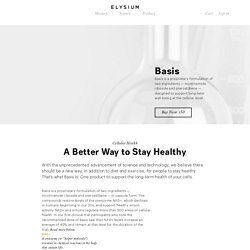 In each cell are components called organelles, including familiar names like the mitochondria and the nucleus, which communicate with each other to carry out all of the processes in our body. This communication consists of physical, chemical, and nutritional processes by which cells convert food to energy, light to imagery, and stimulus to sensation.

Enzyme In Broccoli Appears to Slow Aging (& Benefits You in Other Powerful Ways) By Dr. 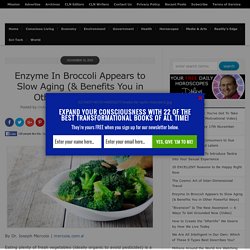 Joseph Mercola | mercola.com Eating plenty of fresh vegetables (ideally organic to avoid pesticides) is a foundational aspect of a healthy diet, and can help lower your risk for many chronic diseases, including type 2 diabetes,1 heart disease, stroke and certain cancers. Besides being rich in vitamins, minerals and fiber, vegetables also contain antioxidants and disease-fighting compounds you won’t find in other foods, especially not processed foods. Some phytochemicals (plant chemicals) help reduce inflammation and eliminate carcinogens, while others regulate cell reproduction, apoptosis (programmed cell death) and DNA maintenance. 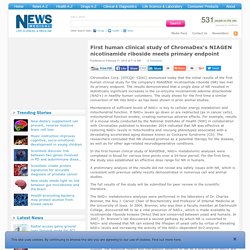 (OTCQX: CDXC) announced today that the initial results of the first human clinical study for the company's NIAGEN® nicotinamide riboside (NR) has met its primary endpoint. The results demonstrated that a single dose of NR resulted in statistically significant increases in the co-enzyme nicotinamide adenine dinucleotide (NAD+) in healthy human volunteers. The study shows for the first time a similar conversion of NR into NAD+ as has been shown in prior animal studies. Maintenance of sufficient levels of NAD+ is key to cellular energy metabolism and mitochondrial function. If NAD+ levels go down or are redirected (as in cancer cells), mitochondrial function erodes, creating numerous adverse effects. In the first human clinical study of NIAGEN®, NAD+ metabolomic analyses were completed in blood for various time points over a 24-hour period. The full results of the study will be submitted for peer review in the scientific literature. Dr. Nobel Laureate Dr. 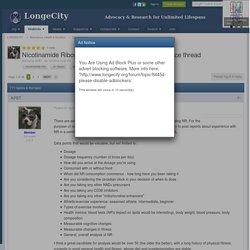 My not-very-well-informed notion is that at 84¾, I may need supplementation more than most. I don't generally take vitamins, and I try to eat as healthy a diet as I can. Whether or not I need supplements is a question I don't know how to answer. Beyond Resveratrol: The Anti-Aging NAD Fad. Aging cells. 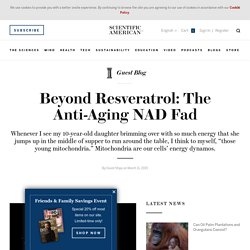 Old human fibroblasts showing their mitochondria in large branched networks (red), their nuclear DNA (blue) and sites of DNA damage (green). Scientists may have just found the key to reversing the aging process. What if there was a pill you could take that extended your life by ten, twenty, fifty years? 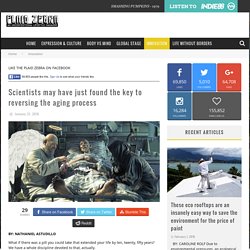 We have a whole discipline devoted to that, actually. A life-extending pill might sound like science fiction but by understanding the body and its biological processes, scientists are able to identify the causes of disease and counteract them. Russian scientist says he is stronger and healthier after injecting himself with 'eternal life' bacteria. The bacteria,named Bacillus F, is amazing because it has remained alive in the permafrost for millions of years. 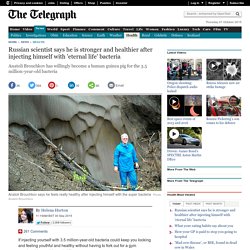 Scientists have tested it on mice and human blood cells, but this wasn't enough for Mr. Brouchkov, who decided to inject himself with it. "I started to work longer, I've never had a flu for the last two years," he said. "After successful experiments on mice and fruit flies, I thought it would be interesting to try the inactivated bacterial culture," he told The Siberian Times. He didn't think there would be a danger, as the bacteria is actually in trace amounts in the water of the region. On/off switch for aging cells discovered by scientists. Scientists at the Salk Institute have discovered an on-and-off “switch” in cells that may hold the key to healthy aging. 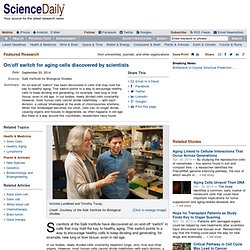 This switch points to a way to encourage healthy cells to keep dividing and generating, for example, new lung or liver tissue, even in old age. In our bodies, newly divided cells constantly replenish lungs, skin, liver and other organs. Hemp Seed-Eating Village in China Holds Oldest, Healthiest People in the World. While there is a man in Bolivia said to be the oldest living person in the world, at 123 years of age, a village in China is boasting ages far older than the global average, and few suffer from any health problems. 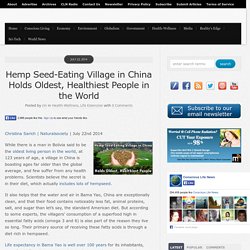 Scientists believe the secret is in their diet, which actually includes lots of hempseed. It also helps that the water and air in Bama Yao, China are exceptionally clean, and that their food contains noticeably less fat, animal proteins, salt, and sugar than let’s say, the standard American diet. But according to some experts, the villagers’ consumption of a superfood high in essential fatty acids (omega 3 and 6) is also part of the reason they live so long. Their primary source of receiving these fatty acids is through a diet rich in hempseed.

‘Elixir of Youth’ Found? New Experimental Drug Reverses Aging. Scientists from Harvard Medical School claimed that they have finally found the ‘elixir of youth’ which can not only slow down the aging process, but also reverse it. This rejuvenating substance created by American scientists currently works only on mice. “We worked on understanding the mechanisms of aging and conducted experiments on mice. For this purpose we selected mature enough animals that were older than two years, and began to introduce the experimental drug. To our surprise, just in a week the mice got younger. Nerium oleander Plant. Found: Secret Of Looking Up To 40 Years Younger Is Chemical That Rewinds The Effects Of Old Age And Can Make You Look 20 Again. (Before It's News) Harvard Medical School made the discoveryA protein found in all living cells called NAD could be the keyThey are also exploring whether it can be used to treat rare diseases Daily Mail By Emma Thomas PUBLISHED: 00:15 EST, 20 December 2013 | UPDATED: 05:07 EST, 20 December 2013. 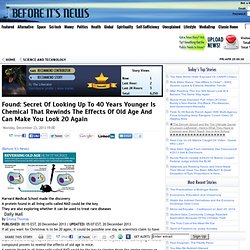 Science Finds Fountain of Youth Brain Region That Slows Down Aging. TA65. Many customers have been calling regarding TA65.