Historical truths behind the Israel - Palestine conflict. SAN DIEGO, August 27, 2014 — For many years now the world at large has taken interest in Israel, a tiny little piece of real estate no bigger than the state of New Jersey. 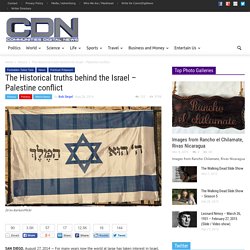 Somehow the idea of Jews having their own homeland is viewed as a threat to world peace. Protests against the Israeli bombing of Gaza have been going on in capitals all over the world, including London, Istanbul and Berlin. On Saturday, thousands of protesters got together in central London calling for the discontinuation of Israeli military activity. One day before, police removed 25 protesters with banners saying “Stop arming Israel.” As anti-Semitism heats up, so does Fuel For Truth. The New York Blueprint – As he drinks some red wine, Etan Harris passionately makes a pro-Israel argument but only minutes later, he makes an anti-Israel argument. 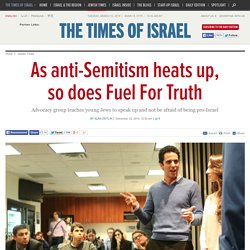 He’s flip-flopped, but it’s intentional. (And he isn’t drunk.) Get The Times of Israel's Daily Edition by email and never miss our top stories Free Sign up! The “party” he’s attending is part of a role-play in a boot-camp for Fuel For Truth, an Israel advocacy group that trains Jewish professionals in their 20s and 30s to speak intelligently and articulately in Israel’s favor. Harris, 30, from Brooklyn, is one of 20 in the current class that meets once a week in Fuel For Truth’s midtown office. Fania Oz-Salzberger: But don't pretend a boycott on the economy will have no effect on hospitals, schools and ordinary, peace-loving citizens. It's time. 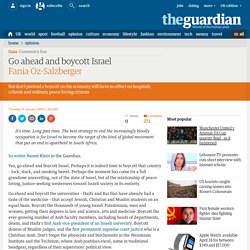 Long past time. The best strategy to end the increasingly bloody occupation is for Israel to become the target of the kind of global movement that put an end to apartheid in South Africa. So writes Naomi Klein in the Guardian. Yes, go ahead and boycott Israel. Perhaps it is indeed time to boycott that country – lock, stock, and smoking barrel. Go ahead and boycott the universities – Haifa and Bar Ilan have already had a taste of the medicine – that accept Jewish, Christian and Muslim students on an equal basis.

Boycott the dozens of hospitals that have given, and are currently giving, full and equal medical care to sick and injured Israeli Jews and Arabs, and to emergency patients from both the West Bank and the Gaza Strip. Gaza is burning. Why not boycott all Israeli journalists and reporters? Klein says she wishes to boycott "Israeli economy but not Israelis". Those calling for a boycott of Israel are ignoring some painful truths. This past weekend, 700 British artists had a letter published in the Guardian in which they called on others to boycott Israel until what they term the “colonial occupation” ends. 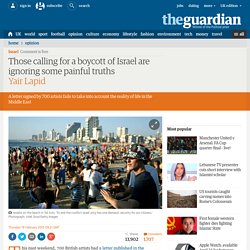 As an Israeli politician who supports the creation of a Palestinian state, it has been a long time since I saw a letter so shallow and lacking in coherence. The fact that, as is common with petitions like this, the majority of the signatories are unaware of the reality here in the Middle East, doesn’t reassure me. It only takes one “useful idiot” like Roger Waters (the expression is not an insult but a phrase attributed to Lenin to describe weak liberals used by cynical regimes for their own ends) to call Israel an apartheid state and the liberal choir will immediately stand to attention and sing the chorus with him. 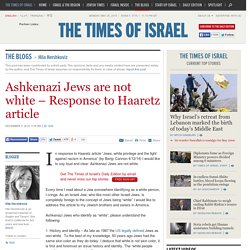 Get The Times of Israel's Daily Edition by email and never miss our top stories Free Sign up! Every time I read about a Jew somewhere identifying as a white person, I cringe. As an Israeli Jew, who like most other Israeli Jews, is completely foreign to the concept of Jews being “white” I would like to address this article to my Jewish brothers and sisters in America. Ashkenazi Jews who identify as “white”, please understand the following: 1. Secondly, Jews are not a “religion”. F L A M E. Dear Friend of FLAME: One of the most challenging---and troubling---fronts in our battle to spread the truth about Israel is on those U.S. campuses beset by lies propagated by the Boycott, Divestment and Sanctions (BDS) movement. 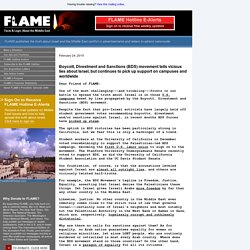 Despite the fact that pro-Israel activists have largely held off student government votes recommending boycotts, divestment and/or sanctions against Israel, in recent months BDS forces have picked up steam. The 10 Campuses with the Worst Anti-Semitic Activity. Wednesday, 25 February 2015 17:29 Edited By JV Staff Columbia University is Upper Manhattan is at the top of the list of the 10 U.S. campuses with the most anti-Semitic activity. 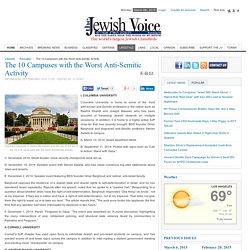 Columbia University is home to some of the most well-known anti-Semitic professors in the nation such as Rashid Khalidi and Joseph Massad, who has been accused of harassing Jewish students on multiple occasions. In addition, it is home to a highly active SJP chap-ter that has recently brought BDS founder Omar Barghouti and disgraced anti-Semitic professor Steven Salaita to campus. A. March 10, 2014: Israeli Apartheid Week. B. C. D.