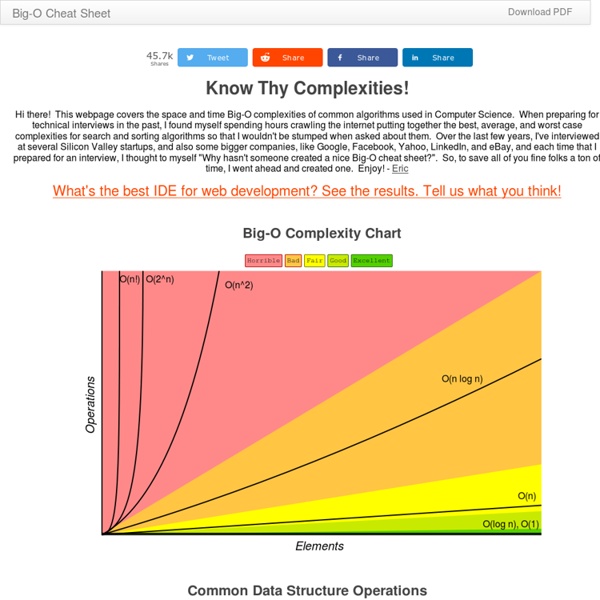 Hi there! This webpage covers the space and time Big-O complexities of common algorithms used in Computer Science. When preparing for technical interviews in the past, I found myself spending hours crawling the internet putting together the best, average, and worst case complexities for search and sorting algorithms so that I wouldn't be stumped when asked about them. Over the last few years, I've interviewed at several Silicon Valley startups, and also some bigger companies, like Yahoo, eBay, LinkedIn, and Google, and each time that I prepared for an interview, I thought to myself "Why oh why hasn't someone created a nice Big-O cheat sheet?". So, to save all of you fine folks a ton of time, I went ahead and created one. Enjoy!

CS 240 Computer Science II Syllabus Spring 2008 SYLLABUS This page last changed 6/19/08 Objectives: To develop skills in the design and development of computer software continuing to utilize an object-oriented language, packages, modules and libraries. To develop understanding and build skills in the implementation and use of common data structures used in software development through data abstraction. INTERNAL REPRESENTATION (Java, C++) Like any other dynamic data structure, BST requires storing of some additional auxiliary data, in order to keep its structure. Each node of binary tree contains the following information: a value (user's data); a link to the left child (auxiliary data); a link to the right child (auxiliary data).

The Time Everyone “Corrected” the World’s Smartest Woman By all accounts, Marilyn vos Savant was a child prodigy. Born in St. Louis, Missouri in 1946, the young savant quickly developed an aptitude for math and science. At age 10, she was given two intelligence tests -- the Stanford-Binet, and the Mega Test -- both of which placed her mental capacity at that of a 23-year-old. Programming Sucks Every friend I have with a job that involves picking up something heavier than a laptop more than twice a week eventually finds a way to slip something like this into conversation: "Bro, you don't work hard. I just worked a 4700-hour week digging a tunnel under Mordor with a screwdriver." They have a point. Mordor sucks, and it's certainly more physically taxing to dig a tunnel than poke at a keyboard unless you're an ant. But, for the sake of the argument, can we agree that stress and insanity are bad things?

46 Ways To Start A Business With No Money Most people who want to start their own business don’t have a ton of money laying around and it’s probably one the most common questions I get emailed about: How can I get started without a lot of cash? Well I’ve put together a list below of the best ideas I’ve heard and personally used. I hope you find it useful! The three basic strategies to starting a business without much money are: Delay the normal “business starting” activities like incorporating, hiring, renting office or retail space, etc until AFTER your business has started earning money. This is known as bootstrapping.Doing everything yourself and spending your personal time instead of hiring an expert.

Adnan Aziz Elements of Programming Interviews We're excited to release a free soft copy sampler of EPI. Specifically, this PDF shows the organization, content, style, topics, and quality of our book. We Help Coders Get Hired For every idea you have at an interview, it's super important to be able to evaluate its efficiency. Efficiency is measured by computing the underlying algorithm's time and memory complexity. Why is complexity so important? Meet Walter Pitts, the Homeless Genius Who Revolutionized Artificial Intelligence Walter Pitts was used to being bullied. He’d been born into a tough family in Prohibition-era Detroit, where his father, a boiler-maker, had no trouble raising his fists to get his way. The neighborhood boys weren’t much better. One afternoon in 1935, they chased him through the streets until he ducked into the local library to hide.