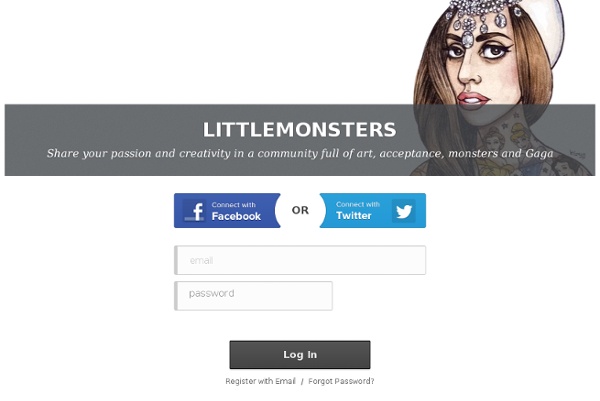 Welcome home, little monsters. This is for us. LittleMonsters.com is a place for all monsters to gather, to create, to share, and to inspire. Remember, it's up to us to keep LittleMonsters.com a safe and accepting space for everyone, so please... Be brave. Dare to create and share your art with the world.

LittleMonsters - Sociedade Lunar Youtube - Backplane Welcome home, little monsters. This is for us. LittleMonsters.com is a place for all monsters to gather, to create, to share, and to inspire. Remember, it's up to us to keep LittleMonsters.com a safe and accepting space for everyone, so please... Be brave. Lady Gaga, Tech Investor Lady Gaga at Twitter headquarters For a girl whose father was worried about her getting a real job, Lady Gaga’s showing dear old dad there’s no cause for concern. Since reportedly going broke for the early portion of her pop star career, Lady Gaga’s taken on the title of Polaroid creative director, unofficial (and unwanted) ice cream muse, and Farmville promoter among other things. Now you can add tech angel investor to the list. Someone’s going to need a bigger business card. Skipping the trend of celebrity as online startup entrepreneur, Gaga’s will go straight to online startup investor with a stake in a $1 million investment in online startup Backplane.

JoeGullar Create your trusted influence NetworkShare content and ideasBuild your influence Revealed: Bono And The Edge Of U2 Are Dropbox Investors In the annals of celebrities investing in tech startups, this one’s looking especially smart. Bono and The Edge, the singer and lead guitarist of Irish rock band U2, got into Dropbox’s $250 million second round last year, they said in a tweet today. It’s the first individual, publicly announced startup investment for the vocalist, to our knowledge. And unlike grandly-conceived social media startups or late-stage investments that celebrities have gone after in recent years, Dropbox is still in its early days. I imagine some khakis-and-blue-shirt VCs are a little jealous of the multiples ahead. Bono, of course, has something of a track record in tech investing already.

Publicidad ECUADOR Create your trusted influence NetworkShare content and ideasBuild your influence Wiredoo: MC Hammer Announces A New Search Engine “If you want to swing the bat, why not swing for the fences?” With that statement, MC Hammer — yes, that MC Hammer — announced his new search engine, Wiredoo, during the Web 2.0 Summit today. The website says that Wiredoo is in pre-Beta right now, but there’s a sign-up form for anyone interested in trying it out when the search engine is ready for real testing. Hammer explained that Wiredoo’s focus will be on “deep search” and described that as another word for “relational search.” He used simple query examples like “cars” and “homes” and showed how a search for the latter would produce information about neighborhoods, local schools, mortgages, insurance and so forth.

Sociedade Lunar Create your trusted influence NetworkShare content and ideasBuild your influence MC Hammer Early life and education[edit] Stanley Kirk Burrell was born on March 30, 1962 in Oakland, California. His father was a professional poker player and gambling casino manager (at Oaks Card Club's cardroom), as well as warehouse supervisor.[20] He grew up poor with his mother (a secretary) and eight siblings in a small apartment in East Oakland. The future rapper recalled that six children were crammed into a three-bedroom housing project apartment. The Burrells would also frequent thoroughbred horse races, eventually becoming owners and winners of several prestigious graded stakes.[20] In the Oakland Coliseum parking lot the young Burrell would sell stray baseballs and dance accompanied by a beatboxer.

Will Ferrell Early life Ferrell was born in Irvine, California,[2] the son of Betty Kay (née Overman; born 1940), a teacher who taught at Old Mill School elementary school and Santa Ana College,[4] and Roy Lee Ferrell, Jr. (born 1941), a musician with The Righteous Brothers.[5] His parents were both natives of Roanoke Rapids, North Carolina, and moved to California in 1964.[6][7] Ferrell's ancestry includes English, German, and Irish.[8][9][10] He has a younger brother named Patrick.[11] When he was eight years old, his parents divorced. Shoestring Startups – Australian Startup & Small Business News, Profiles & How Tos Of late there have been quite a few celebrities investing in tech startups and startups in general – including our own Hugh Jackman, who has recently co-founded a new incubator and coffee and tea company that supports and grows developing countries. Leo was recently involved in a 4 million dollar seed round along with other pretty high profile investors for a new visual social media platform called Mobli. DiCaprio will take on an advisory position at Mobli. So what does Mobli do?

Ashton Kutcher Kutcher currently stars as Walden Schmidt on the CBS sitcom Two and a Half Men, since Charlie Sheen's firing from the show in 2011. Early life Kutcher was born in Cedar Rapids, Iowa to factory worker Larry M. Kutcher and Procter & Gamble employee Diane (Finnegan) Kutcher.[6][7] His father is of Czech descent and his mother is of Irish, German, and Czech ancestry.[8][9] Kutcher was raised in a "relatively conservative" Catholic family.[10] He has an older sister named Tausha and a fraternal twin brother named Michael, who had a heart transplant when the brothers were young children. Michael also has cerebral palsy and is a spokesperson for the advocacy organization Reaching for the Stars.[11] Career

Shoestring Startups – Australian Startup & Small Business News, Profiles & How Tos We see them on the big screen, are part of there million plus fan bases on social media and sing their number one hit tunes [badly] in the shower. But did you know that some of our favourite celebrities are also very savvy investors in the tech startup scene? We have compiled together our top 10 list of Celeb Tech Investors.