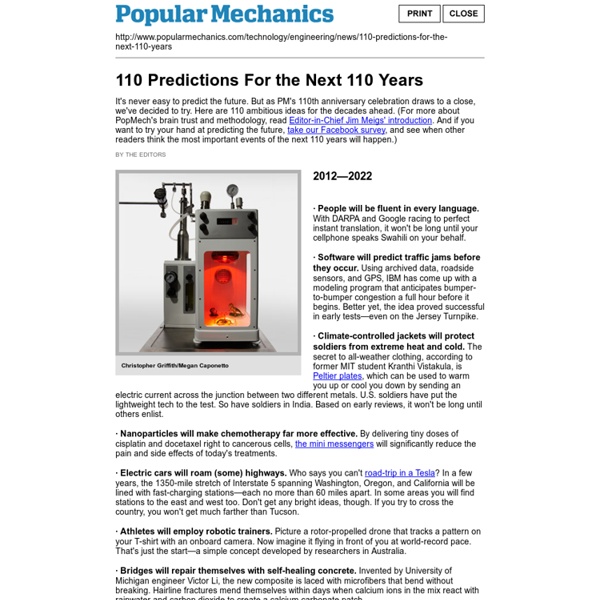 · People will be fluent in every language. With DARPA and Google racing to perfect instant translation, it won't be long until your cellphone speaks Swahili on your behalf. · Software will predict traffic jams before they occur. Using archived data, roadside sensors, and GPS, IBM has come up with a modeling program that anticipates bumper-to-bumper congestion a full hour before it begins. Better yet, the idea proved successful in early tests—even on the Jersey Turnpike. · Climate-controlled jackets will protect soldiers from extreme heat and cold. · Nanoparticles will make chemotherapy far more effective. · Electric cars will roam (some) highways. · Athletes will employ robotic trainers. · Bridges will repair themselves with self-healing concrete. · Digital "ants" will protect the U.S. power grid from cyber attacks. · Scrolls will replace tablets. Your Car Will Be Truly Connected · Your genome will be sequenced before you are born. 10 Things That Will Remain the Same

Matheus Lopes Manifesto, traditional art, mixed media Building a galaxy, digital art, mixed media Alternate ending, digital art, mixed media 20 Inventive Ways to Upcycle Shipping Pallets by Ian Rebello repurposing, diy By Inthralld on Aug 19, 2012 Shipping pallets have become a bit more popular with the quest for sustainable elements and materials in one’s home. With the popularity of Green Design and creative prototypes floating around out there, there are some great d.i.y. opportunities for things that can be found locally– like pallets. We’ve rounded up 20 great inventive uses of the bland old wooden pallet and put them together for you to gain some inspiration from. They range anywhere from merely stacking the unused pallets to make a base for a bed, sofa or coffee table to the pallet built barn or home.

Crystal 'Flowers' Bloom in Harvard Nanotech Lab Imagine peering into a microscope and finding yourself in a garden. That's the case at Harvard School of Engineering and Applied Sciences, where researchers have found a way to shape microscopic crystals into complex and often beautiful structures. Inspired by coral reefs, seashells and other naturally occurring complex mineral structures, postdoctoral fellow Wim L. Noorduin and Harvard colleagues have been researching ways to manually recreate similar designs. These "flowers" were created by mixing barium chloride and sodium silicate, also known as waterglass, in a beaker of water.

Isaac Asimov’s 1964 Predictions About 2014 Are Frighteningly Accurate In 1964, famed science fiction writer Isaac Asimov ventured a guess at what you might find if you set foot inside the 2014 World’s Fair. Using his gift for envisioning future technology, Asimov’s predictions from 50 years out are both stunningly accurate and perhaps a little bit depressing. Here’s a look at what he got right. Y-chromosomal Adam In human genetics, Y-chromosomal Adam (Y-MRCA) is a hypothetical name given to the most recent common ancestor (MRCA) from whom all currently living people are descended patrilineally (tracing back only along the paternal or male lines of their family tree). However, the title is not permanently fixed on a single individual (see below). Y-chromosomal Adam is named after the biblical Adam, but the bearer of the chromosome was not the only human male alive during his time.[1] His other male contemporaries could also have descendants alive today, but not, by definition, solely through patrilineal descent.

100 Websites To See Before You Die (Part 1) - Page 2 Shape the Hive What are humans, really, but so many bees, buzzing away? That’s the question (we think) asked by Shape The Hive, a visual “experiment in digital collaboration.” In more concrete terms, Shape The Hive is a massive, color-coded hex grid, where anyone can use a sort of virtual kaleidoscope to fill in hexes with distorted images or videos. Nanostructured nanowires appears to solve loss of superconductivity in very strong magnetic fields Researchers have discovered a way to efficiently stabilize tiny magnetic vortices that interfere with superconductivity—a problem that has plagued scientists trying to engineer real-world applications for decades. The discovery could remove one of the most significant roadblocks to advances in superconductor technology. When magnetic fields reach a certain strength, they cause a superconductor to lose its superconductivity. But there is a type of superconductor—known as “Type II”—which is better at surviving in relatively high magnetic fields. In these superconductors, magnetic fields create tiny whirlpools or “vortices.”

Humans Play God Big-time: Relocate Oceans To Deserts Transplanting seas to inland ocean lakes? A good idea for the Middle East? The two century-old and highly respected Japanese engineering giant Shimizu has hatched a wild and crazy proposal to rehabilitate the desert for human use. Their idea is to move vast amounts of seawater along canals that would track deep into desert landmasses to create a series of connected huge inland seas measuring 30 km (18 miles) across. Small cities could then be created within the gigantic seawater “lakes,” on artificial islands. 10 Psychological Experiments That Went Horribly Wrong Psychology as we know it is a relatively young science, but since its inception it has helped us to gain a greater understanding of ourselves and our interactions with the world. Many psychological experiments have been valid and ethical, allowing researchers to make new treatments and therapies available, and giving other insights into our motivations and actions. Sadly, others have ended up backfiring horribly — ruining lives and shaming the profession. Here are ten psychological experiments that spiraled out of control. 10.

EL Wire EL Wire, also known as Electroluminescent wire, is a stiff wire core coated with phosphor and then covered with a protective PVC sheath. When an AC signal is applied to it, it glows an aqua (blue green) color. Sometimes its covered with a colored plastic shell to make it appear another color. It looks a little like thin neon. Very bendable, it keeps its shape and you can curl it around your finger.

Just add water: How scientists are using silicon to produce hydrogen on demand Related images(click to enlarge) Swihart Research Group, University at Buffalo Super-small particles of silicon react with water to produce hydrogen almost instantaneously, according to University at Buffalo researchers. In a series of experiments, the scientists created spherical silicon particles about 10 nanometers in diameter. When combined with water, these particles reacted to form silicic acid (a nontoxic byproduct) and hydrogen -- a potential source of energy for fuel cells. The reaction didn't require any light, heat or electricity, and also created hydrogen about 150 times faster than similar reactions using silicon particles 100 nanometers wide, and 1,000 times faster than bulk silicon, according to the study.

20 Furniture Marvels For The Futuristic Home Design will keep changing to suit the most current of trends, tastes and functionality needs of today’s buyers. The same can be evidently seen in mobile phones, PC keyboards, gaming consoles and even in mugs. These creative means to re-invent product designs as we know it are not lost in another important aspect of our daily life: home furniture. Granted some designs will look cooler and more comfortable than others, but pay extra attention to futuristic designs. The 33 Most Beautiful Abandoned Places In The World Many people doesn’t know, and didn’t even heard about these famous abandoned places. Many of these places are really something amazing, but they are also really sad when you take a closer look at them. On the folowing list, you can see abandoned planes, abandoned ships, as well as the abandoned houses, and so many other things, that are really amazing and magnificent. So, check out these amazing abandoned places photos. 1. Christ of the Abyss at San Fruttuoso, Liguria