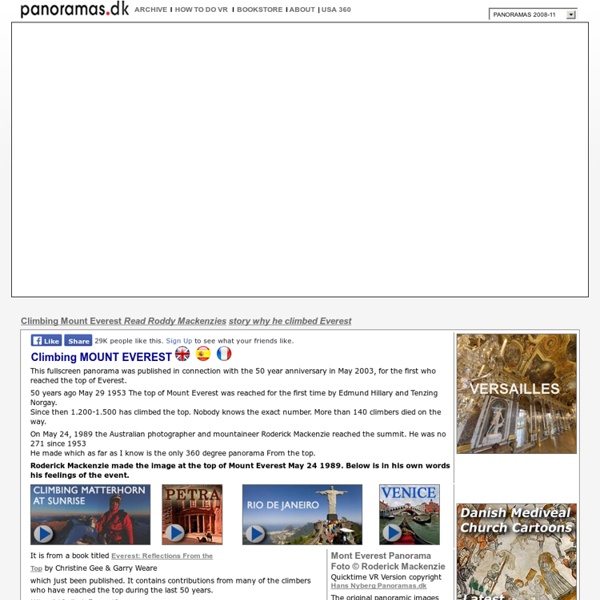 Abandoned on Everest In 2006, a lone climber attempting the summit of Mount Everest for the third time was, purely by chance, caught in an amateur photograph taken by another climber of the scenic mountaintop ahead. The climber in the photograph was making his way up what is known as the Final Push of the Northeast ridge, between Camp VI at 8,230 m and the summit. It was late in the afternoon, a foolishly reckless time to undertake the lengthy and dangerous route. Google Street View – Explore natural wonders and world landmarks Zhoucun Ancient Town Zhoucun ancient commercial town now is national AAAA level tourism scenic spot, cradle land of Lushang culture, demonstration base of national culture industry, provincial level key cultural relic protection unit, provincial level civilized scenic spot, provincial level patriotic education base and one of top ten film shooting bases in Shandong. The total area of planning scenic spots is 4.92 sq.m, having protection area, control area and transition area.

Lhasa – Big Pixel Precision: 44.8 billion pixel Time: June 2016 Place: North Mountain, Lhasa Lhasa means a holy land the Tibetan language. I’ve heard from my friends who had been there that you would be moved to tears because of its amazing beauty and you would get unsophisticated under the influence of the local people there. In June 2016, we were given the chance to visit the mysterious and challenging place. MayaArch3D A web-based 3D GIS for archaeological research The MayaArch3D Project has built a virtual research environment for the documentation and analysis of complex archaeological sites —specifically, it is a web-based, 3D-GIS that can integrate 3D models of cities, landscapes, and objects with associated, geo-referenced archaeological data. An international, interdisciplinary project This international, interdisciplinary project brings together archaeologists, art historians, and cultural resource managers with experts in geosciences, remote sensing, photogrammetry, 3D modeling, and virtual reality from various institutions in Germany, the US, Italy, and Honduras. Case Study: UNESCO World Heritage site and ancient Maya city of Copan, Honduras The digital collections used to demonstrate the system contain basic information for other ancient Maya cities in Central America, but focus on the archaeology of Honduras and specifically Copan.

BACK TO THE FUTURE : Irina Werning - Photographer I love old photos. I admit being a nosey photographer. As soon as I step into someone else’s house, I start sniffing for them. Most of us are fascinated by their retro look but to me, it’s imagining how people would feel and look like if they were to reenact them today… Two years ago, I decided to actually do this. So, with my camera, I started inviting people to go back to their future.. No Buddhist Nations Except Japan Grant Entry to Dalai Lama Due to Chinese Pressure - Tibetan Journal The Tibetan spiritual leader His Holiness the Dalai Lama in the recent Hindustan Times interview spoke candidly about various topics surrounding him. His Holiness also revealed that no Buddhist nations except Japan is ready to grant him entry due to Chinese pressure. His Holiness the Dalai Lama explained that he has nothing to ask from any head of state or country when asked for his reaction on various heads of government refusing to meet him fearing the reaction of a now all-powerful China. “I have nothing to ask from any head of state or country. I think they are afraid of the Chinese reaction. I met Barack Obama as former US President and Nobel laureate as also late President George Bush Senior.

Acropole d'Athènes The Propylaia, famous already in antiquity for its brilliant coffered ceilings and the unique design of the monumental entrance to the sanctuary of Athena, was a work of the architect Mnesikles (437-432 B.C.). It consists of a central building with two six-columned Doric porticoes east and west and two Ionic colonnades in the interior, framed at the north and south by two wings with porches in the Doric order. The outbreak of the Peloponnesian War meant that the final work on the surfaces of the monument was never completed. The destruction of most of the superstructure of the central building during the years 1640-1830 , after the explosion of gunpowder that was stored in the monument by the Turks, has led to a gradual loss of authentic building material, so that until now no more than one fifth of it had been recognised.

XL Catlin Seaview Survey Caribbean Expedition: Survey 6 Bermuda was once known as the "Isle of Devils" for very good reason - the treacherous reefs surrounding the island have ensnared many ships that sailed too close to Bermuda's shores, there are hundreds of shipwrecks in the waters surrounding the island. We are here to survey the waters surrounding this isolated island as an extension of our 2013 Caribbean campaign. Whilst in the area we are lodging at, and working closely with BIOS - The Bermuda Institute of Ocean Sciences. BIOS (founded in 1903) is an independent, non-profit marine science and education institute which hosts a full time faculty of oceanographers, biologists and environmental scientists, graduate and undergraduate students. We will also be working closely with the Bermuda Reef Ecosystem Assessment and Mapping Programme (BREAM) and the Bermuda Natural History Museum.