Himalaya. The Himalayas from 20,000 ft. : great video. The 8k+ peaks. Abandoned on Everest. In 2006, a lone climber attempting the summit of Mount Everest for the third time was, purely by chance, caught in an amateur photograph taken by another climber of the scenic mountaintop ahead. 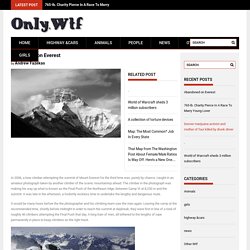 Everest webcam. Mount Everest-Monte Everest -360 panorama view from summit - Climbing Mt Everest - Nepal Trekking-panoramic photo from top of Mont Everest. It is from a book titled Everest: Reflections From the Top by Christine Gee & Garry Weare which just been published. 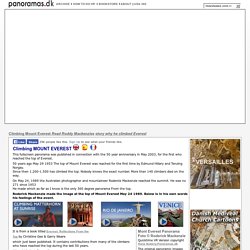 It contains contributions from many of the climbers who have reached the top during the last 50 years. Lhasa – Big Pixel. Precision: 44.8 billion pixel Time: June 2016 Place: North Mountain, Lhasa Lhasa means a holy land the Tibetan language. 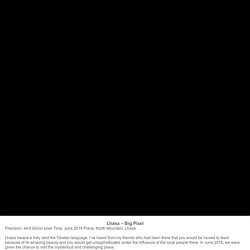 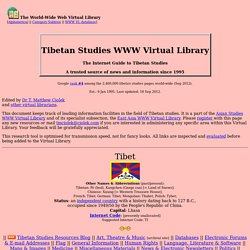 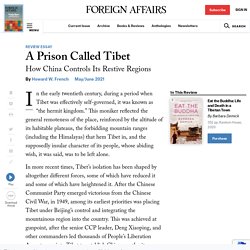 This moniker reflected the general remoteness of the place, reinforced by the altitude of its habitable plateaus, the forbidding mountain ranges (including the Himalayas) that hem Tibet in, and the supposedly insular character of its people, whose abiding wish, it was said, was to be left alone. In more recent times, Tibet’s isolation has been shaped by altogether different forces, some of which have reduced it and some of which have heightened it. 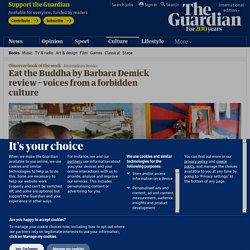 At stake, of course, is the identity of the next Dalai Lama. Inconveniently for China, which sees the Tibetan spiritual leader as “a jackal in monk’s robes” and would prefer someone more pliant, he insists he will be reborn in exile. The determination of the avowedly atheist Communist party to assert its primacy in the spiritual realm, as much as every other, illustrates a collision with Tibetan life that can be glimpsed through such incongruous official announcements but is rarely fully witnessed.

Eat the Buddha is a powerful exception: a deeply textured, densely reported and compelling exploration of Ngaba, Sichuan, a “nothing little town that had just gotten its first traffic light” but that became, horrifyingly, “the undisputed world capital of self-immolations”. More than 150 Tibetans, and at least 42 in Ngaba, have set fire to themselves in just over a decade. Tibetan Buddhist school in Kham Drakgo forcibly demolished - Central Tibetan Administration. Assimilationist China removes Tibetan, Uyghur from two online language and learning apps - Tibetan Review.

(TibetanReview.net, Nov03’21) – After making Mandarin the only medium of instruction for children of all ages across the country, including even for preschoolers, under an Aug 2 directive from the ministry of education, language learning app Talkmate and the online video streaming site Bilibili have removed Tibetan and Uyghur languages from their platforms, citing Chinese government policy, reported chinadigitaltimes.net Nov 2. 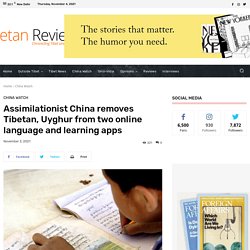 The moves are clearly part of President Xi Jinping’s call for sweeping Sinicization of the ethnic minority regions across the People’s Republic of China (PRC). The latest move reflects the shift of the Communist Party of China (CPC) toward a more assimilationist stance on linguistic and ethnic diversity, the report noted. The report said that on Oct 29, Talkmate’s Weibo account announced that Tibetan and Uyghur courses were indefinitely removed due to “government policies.” By Nov 1, the post itself was no longer available, it added. Tibet is half won. China is embroiled in a tense military standoff with India for the past 18 months now, and during this time, the CCP has been humiliated time and again. 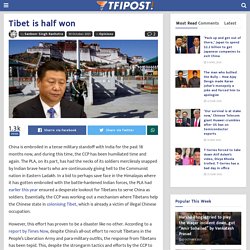 The PLA, on its part, has had the necks of its soldiers mercilessly snapped by Indian brave hearts who are continuously giving hell to the Communist nation in Eastern Ladakh. In a bid to perhaps save face in the Himalayas where it has gotten embroiled with the battle-hardened Indian forces, the PLA had earlier this year ensured a desperate lookout for Tibetans to serve China as soldiers. Essentially, the CCP was working out a mechanism where Tibetans help the Chinese state in colonising Tibet, which is already a victim of illegal Chinese occupation. However, this effort has proven to be a disaster like no other. Hongcheng Temple in China Closed, Monks Forced to Return to Secular Live. 'Running out of time': Tibetan president-elect warns of cultural genocide.

China Cuts Hours for Tibetan Buddhists at Lhasa’s Jokhang Temple to Half That of Tourists — Radio Free Asia. Chinese authorities in Tibet’s regional capital Lhasa have sharply cut visiting hours to just three and a half hours for Buddhist devotees at the city’s Jokhang temple, while leaving the temple complex and major pilgrimage site open twice as long for tourists, according to a public notice this week. 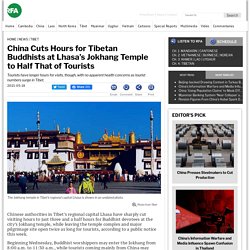 Beginning Wednesday, Buddhist worshippers may enter the Jokhang from 8:00 a.m. to 11:30 a.m., while tourists coming mainly from China may visit from 12:00 noon to 7:30 p.m., the May 17 notice issued by the Tsuglakhang Temple Management group says. Tsuglakhang is the name of the larger temple and administration complex in Lhasa of which the Jokhang is a part. Fears of a possible spread of COVID-19 in the city amid concerns over a new outbreak in India and Nepal were the reasons for establishing the restricted hours, said the notice, a copy of which was obtained by RFA’s Tibetan Service. Tourism surges in Tibet. We have copyright over Dalai Lama reincarnation: Tibetan govt-in-exile. Dismissing Chinese claims on appointing the next Dalai Lama, the president of the Tibetan Government in Exile has said it is Tibetans who have "copyright" over his reincarnation, and Beijing plans to have a "duplicate" copy. 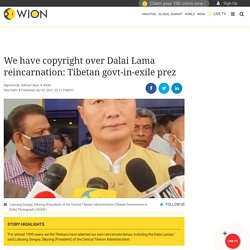 His Holiness also revealed that no Buddhist nations except Japan is ready to grant him entry due to Chinese pressure. His Holiness the Dalai Lama explained that he has nothing to ask from any head of state or country when asked for his reaction on various heads of government refusing to meet him fearing the reaction of a now all-powerful China. “I have nothing to ask from any head of state or country. I think they are afraid of the Chinese reaction. I met Barack Obama as former US President and Nobel laureate as also late President George Bush Senior. Later in the interview, His Holiness also told that although he is Tibetan physically, spiritually, he is Indian while at the same time explaining that his return to Tibet is of no use if there is no freedom, rather he would prefer India and its freedom! Tibet Le Parti Communiste Chinois s'inquiète de la montée du bouddhisme.

Their cause? Defending the official line of the Communist Party. On Feb. 2, the University of California, San Diego (UCSD) formally announced that the Dalai Lama would make a keynote speech at the June commencement ceremony. I Stand For Tibet: 6 Reason Why "Tibet" is not Part of China. Tibet's history Tibet had history written over 2,000 years ago. Divide, Depoliticize, and Demobilize: China’s Strategies for Controlling the Tibetan Diaspora. Introduction Last fall, the Tibetan community in New York City was scandalized by news that a New York Police Department (NYPD) officer named Baimadajie Angwang, allegedly of Tibetan ethnicity, had been arrested and charged with spying on the local Tibetan community for the Chinese Communist Party (CCP) (New York Times, September 21, 2020).

Court filings alleged that Angwang had been affiliated with the CCP since at least 2014 (Eastern District of New York U.S. Attorney’s Office, September 21, 2020). While news of Angwang’s arrest intrigued national media and intensified Washington’s growing concern about China’s overseas influence operations, Tibetans have long felt the creeping presence of Chinese espionage activities in their communities. Propaganda e dissenso politico nella RPC nell'era di Internet 2.0-La denuncia sociale via web in Tibet e in Xinjiang. China’s new directive on controversial Shugden spirit in Tibet in bid to further discredit Dalai Lama - International Campaign for Tibet. A copy of the document, entitled “Some opinions on dealing correctly with the ‘Gyalchen Shugden’ issue” and issued by the General Office of the Communist Party Committee of the Tibet Autonomous Region, is translated below from Tibetan into English.

It was released on February 20, 2014, but has only just reached ICT due to restrictions on information and the dangers of sending such documents outside Tibet. The document states that the issue “should be given a high degree of importance, and clearly recognized as a deceitful ploy by the 14th Dalai’s Clique to split the country.” This characterization of the issue indicates that Tibetans who encourage others not to propitiate the spirit in accordance with the Dalai Lama’s advice could face criminal charges and imprisonment.

The Dalai Lama, who himself had propitiated Shugden at one time, has said that after thorough investigation there were “profound historical, social and religious problems associated with it.”[1] India strikes a deal with China on Tibetans. By: René Muller. Where is Tibet: A litany of lies from the Tibetan leadership. Who’s the hypocrite? Chinese nationals protesting for their freedoms in Tiananmen Square. China has no legitimacy in spiritual matters: Tibetan PM. Tibetans use self-immolation to protest rule by Chinese as party congress opens. BEIJING — Tibetan protests against Chinese rule intensified around the opening of a pivotal Communist Party Congress, as three teenage monks and two other Tibetans set themselves on fire over two days, activists reported Thursday.

China’s Reincarnation Database Has Verified The Existence of 870 Living Buddhas. But How? Two monks chatting (probably about this new government list) inside a Tibetan Buddhist monastery. (Photo: Luca Galuzzi/WikiCommons CC BY-SA 2.5) While government regulation of reincarnation might sound tricky, China’s Communist Party has gone ahead and given it a go. On January 18, they published an official list of 870 “living Buddhas” who, in Tibetan Buddhism, are believed to be the reincarnations of prominent lamas or religious leaders.