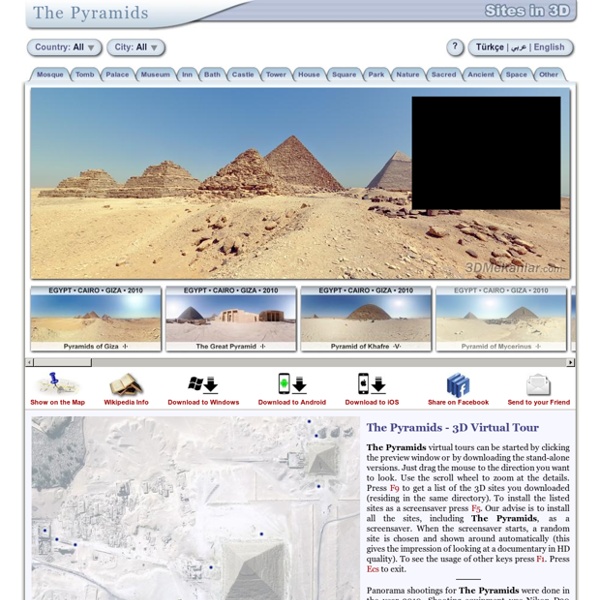 The Pyramids - 3D Virtual Tour The Pyramids virtual tours can be started by clicking the preview window or by downloading the stand-alone versions. Just drag the mouse to the direction you want to look. Use the scroll wheel to zoom at the details. Press F9 to get a list of the 3D sites you downloaded (residing in the same directory). To install the listed sites as a screensaver press F5. Panorama shootings for The Pyramids were done in the year 2010. History of The Pyramids The Egyptian Pyramids were built as tombs for deceased Pharaohs and their consorts. The best known pyramids are undoubtedly the ones at Giza. The Pyramid of Khafre (143.5 meters high) is believed to be built by Mycerinus, the son of Khafre. The Bent Pyramid in Dahshur is considered the first ‘real’ pyramid. Sun Boat Museum In 1954 a real sized old Egyptian boat was found in a pit near the Great Pyramid. Credits We would like to thank Mr.

Pyramides de Gizeh 3841 tombs and monuments listed. Thanks to 10 years of collected research, Dassault Systèmes was able to reconstruct the Giza Necropolis as accurately as possible. Acropole d'Athènes The Propylaia, famous already in antiquity for its brilliant coffered ceilings and the unique design of the monumental entrance to the sanctuary of Athena, was a work of the architect Mnesikles (437-432 B.C.). It consists of a central building with two six-columned Doric porticoes east and west and two Ionic colonnades in the interior, framed at the north and south by two wings with porches in the Doric order. The outbreak of the Peloponnesian War meant that the final work on the surfaces of the monument was never completed. The destruction of most of the superstructure of the central building during the years 1640-1830 , after the explosion of gunpowder that was stored in the monument by the Turks, has led to a gradual loss of authentic building material, so that until now no more than one fifth of it had been recognised.