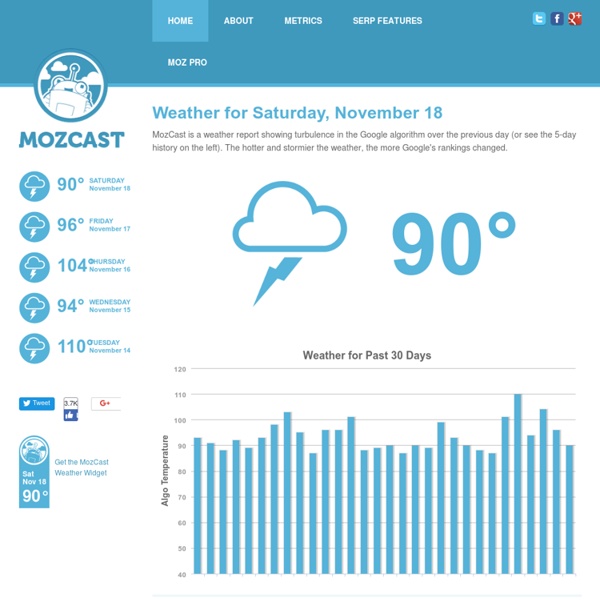 Advanced Marketing Institute - Headline Analyzer Enter Your Headline Text Paste your headline in the text area below. The analysis engine will automatically cut your submission at 20 words, so we encourage you to do a word count before submitting! What is the Headline Analyzer? This free tool will analyze your headline to determine the Emotional Marketing Value (EMV) score. Your headline will be analyzed and scored based on the total number of EMV words it has in relation to the total number of words it contains. In addition to the EMV score, You will find out which emotion inside your customer's your headline most impacts: Click here for a Q&A on the AMI Emotional Marketing Value (EMV) system>

Google Penguin 4.0 – Real Time Penguin not yet started Google Core Update, not Penguin 4.0 was bigger than Penguin 3.0 After waiting for almost a year, Google has confirmed that they’re working on a real-time Google Penguin update. Awaiting the major Penguin update in January as announced by Google after shifting it for many months, I called Google Penguin 4.0 to start already. What looked like Google Penguin 4.0 was a core algo update that was bigger than Penguin 3.0 last year and almost feelt like the massive Penguin 2.1 in 2013. The “real-time feature” implies that effects of the Penguin algorithmic filter, i.e. demotions and promotions of organic rankings for a website due to link spam (unnatural links) happen faster than in the past. Gary Illyes mentioned that the Google engineers are “still testing”, but for me this looked like the “final release candidate.” This means, that it was technically a Panda update, but Panda was integrated into the core algorithm, so is therefore no more a separate update they need to confirm. Table of contents

How To Use Social Reports in Google Analytics To Analyze Specific Blog Posts or Content [Tutorial] In March of this year, Google Analytics released a set of new reports for measuring the effectiveness of traffic from social networks. It was a great addition and provides some valuable information about how social is affecting your business. For example, you can view social referrers, content that received traffic from social networks, view conversations across certain social networks, view conversion data (including last click and assisted attribution), how social visitors flow through your site, and more. One question I keep getting from business owners is how to easily analyze a piece of content they are tracking? For example, let’s say a certain blog post went live recently, was heavily shared across social networks, and ended up driving a lot of traffic. Isolating a Blog Post or Piece of ContentFor this tutorial, I’m going to use a recent post of mine, which ended up being popular within the search marketing industry. Back to our example.

Traveling Further Down the Link-Building Rabbit Hole This post is about link building, so if you’re one of the folks who is terrified of link building and thinks that Google doesn’t care about links and only cares about user experience now feel free to stop reading. For the rest of you, I am going to take you on a journey Alice in Wonderland style and show you how being just a bit more curious can unlock a lot of great opportunities when looking for outreach opportunities. Building a List of Link Prospects To start this exercise you are going to first need a handful of topical, or industry relevant prospects. Note: This can be done using past link prospects, or already earned links as well. I’m not going to dive into the prospecting element of link building in this post, so if you’re unfamiliar with link prospecting or link building in general here are some folks in the industry I would recommend getting acquainted with both on twitter and through their content: Heading Down the Rabbit Hole In this exercise we are doing two things.

39 Blogging Tools to Help You Work Faster & Write Better When you’re finding amazing content to share on social media—the kind of thing that grabs attention and gets people to click, share, and comment—one of the most valuable, most original places to turn is your own blog and the content you personally create. So the questions become: How to create amazing content, how to put together blogposts strategically and efficiently, and how to get your content out to the masses. Writing tips are a good place to start. Do you have a favorite blogging tool? The Huge List of 39 Blogging Tools Tools to brainstorm blogging ideas 1. The crowdsourced answer website can help lead you to the types of questions that real people are asking, questions that you can answer in-depth with a blogpost. 2. Enter a topic or a URL into the BuzzSumo search box, and you’ll get a wealth of information on the content that performs best for social media sharing. 3. Enter a URL into Quick Sprout, and you get an analysis of the site’s performance and content. 4. 5. 6. 7. 8. 9.

Massive Google Fluctuations & Tests Continue Throughout The Weekend I rarely post about Google updates over the weekend, in fact, the last time I posted on a weekend was when Penguin 3.0 launched on or around October 17, 2014. Well, I am not saying what we are seeing is Penguin 4.0 but I am saying the forum chatter and signals are all still at their peak this weekend. On Friday, I covered how SEOs are seeing Google testing various ranking changes - which may often be a sign of an algorithm being released. Google did not tell me anything, so I don't know if Penguin was officially released. But looking at the forum chatter this weekend at WebmasterWorld and two Black Hat World threads and several posts on Twitter and Google+ - many of which I cannot even link to because there are so many, it seems like Google is doing some sort of update or some really active test. My favorite tweet is from Google's John Mueller who responded to someone asking if it was Penguin: Yea, he looped in the President of the United States. I've also got some positive movements.

Help Mike Essex Break Into Amazon's Top 100 Bestsellers! | Boom Online Marketing Today (Friday 27 July), Mike Essex is trying to achieve something a little bit special. He wants to get his Kindle book, Free Stuff Everyday into the top 100 on Amazon. We grabbed a few mins with Mike to ask him about his latest challenge. So we know that you’re trying to break into the Kindle top 100, but why are you doing it? There’s two reasons. The other key driving force is that I’ve hit the same wall that most new authors face. What are you doing to try to get into the top 100? The bulk of the experiment involves asking people to share a link to the book’s Amazon page. How is it all going so far? It’s been a really crazy week. So because of that it forced me to redouble my efforts, and gave me an extra push to see this project succeed. What can other authors learn from your example? Regardless of the success of the experiment, what I’ve already learnt is that people you already know are a huge marketing resource that everyone should use. What can people do to help? Good luck Mike!

Added Nofollow to Paid Links - How Long for Google to Notice? Google SEO News and Discussion forum at WebmasterWorld I disagree with everything you said. If the main income of the website comes from the paid links, why would they fire the company? How would they get paid? Your statement sounds a lot like paranoia: "Hey, if you are afraid of the high odds of getting in a car accident - don't leave your house". As far as the links - if they are relevant and not a lot of them - you have nothing to worry about. There is nothing wrong with linking out. My advice is to cut the middle man (link company) and work directly with the website owners. Remember that using no-follow in your links simply shows Google that you sell ads.

Web Starter Kit — Web Fundamentals Download Web Starter Kit (beta) What is Web Starter Kit? Web Starter Kit is an opinionated boilerplate for web development. Tools for building a great experience across many devices and performance oriented. Helping you to stay productive following the best practices outlined in Google's Web Fundamentals. A solid starting point for both professionals and newcomers to the industry. Features Quickstart Download the kit or clone the repository and build on what is included in the app directory. There are two HTML starting points, from which you can choose: index.html - the default starting point, containing Material Design layout.basic.html - no layout, but still includes our minimal mobile best-practices Be sure to look over the installation docs to verify your environment is prepared to run WSK. Web Performance Web Starter Kit strives to give you a high performance starting point out of the box. Browser Support ChromeEdgeFirefoxSafariOperaInternet Explorer 9+ Troubleshooting Docs and Recipes

Another Google Update - The Biggest Yet Originally Posted by zacatictacMy site made massive jumps upwards. Most of the pages only had social signals added to them and not really any backlinking done. I wonder if google is weighing this heavier now.Similar story. I got a call at 5am from a business partner shouting "we're #1! Mobile Retail Applications: Native v Web Apps In recent years, mobile technology, primarily in Smartphones, has developed to the stage where people are using them in most aspects of their daily life. They use them to check the weather, send emails and connect with their friends. My friend even asks his phone to tell him when to take his food out of the oven. Smartphones have become the modern day Swiss army knife and retailers have been using mobile platforms to generate business from these ever more popular devices in differing ways. With the recent implementation of HTML5 mobile browsers are starting to become more popular with retail companies when they are looking into their mobile Apps. Firstly, I should explain the difference between the two types of Apps and give you a little idea of why this is important to retailers more so than it has been in the recent past. A Native App is software which is specifically designed to run on proprietary operating systems (OS) such as iOS or Android devices.

MozCast Shows Huge Google Changes But Was There An Update? Yesterday, MozCast, Moz's Google ranking volatility tool, reported the highest level of change in Google's search results in the history of MozCast. 113 degrees hot. Typically, on a normal day it will be in the high 60s or low 70s. Why the huge temperature? The other tools such as SERPs.com and SERP Metrics reported normal days for Tuesday. And more importantly, I didn't see any chatter in the SEO forums that would signal a Google search algorithm or ranking update. What set off MozCast? One thing is for sure, I am 99% certain there was no major ranking change yesterday. Heck, even the threads talking about the MozCast numbers have dozens of webmasters saying they didn't see any ranking changes. The threads talking about the MozCast numbers include Google+, BlackHatForums and the ongoing WebmasterWorld. I should note, we did suspect an update on June 19th and Matt Cutts did say there is a multi-week update rolling out now. Forum discussion at Google+, BlackHatForums and WebmasterWorld.