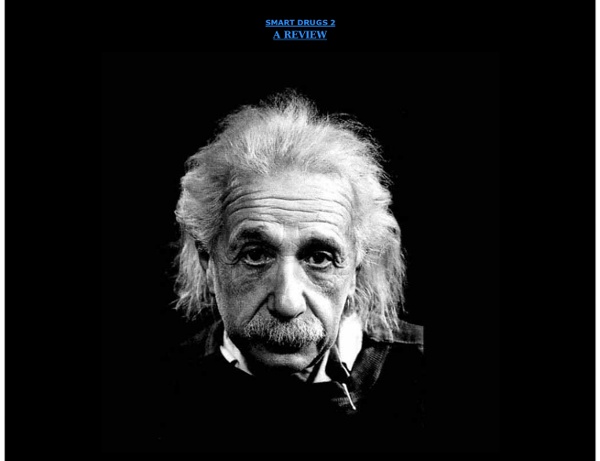 Related:  Drugs and Use

A drug can make sleep optional Stuff like this is the dry straw of punditry: There’s virtually nothing about Modafinil’s off-label use that doesn’t invite speculation, and no way to disprove that speculation in the short term. Will not having to sleep mean managers will work longer hours? Will lower-level workers? Will marriages crumble after doubling the amount of time you have to stay interesting to your partner? Will the bars ever close? As it happens, the drug had been around as a narcolepsy treatment since its UK launch in 1998, and has already generated a fair amount of scholarship around those questions. Why precisely would society want to regulate or govern sleepiness and alertness in this way? That does sound bad. UK sociologist Catherine Coveney interviewed students—who have taken to the drug as a procrastination aid—and night shift workers.

Psychedelics Can Expand Your Consciousness It might seem as though we are all separate, and individual from one another and our environment. While that may appear true and could very well be true in some ways, we are also all connected at the deepest levels of existence. When understanding this, we can look at how we operate daily and begin to ask questions: Why are we so concerned with dominating one another? Why do we strive to be better than others? Why do we chase pieces of paper so that we can have more and more things? Why do we judge one another? Personally I have not done psychedelics so it cannot be completely accurate for me to say exactly what you would feel while doing them. We are all connected. “Psychedelics are illegal not because a loving government is concerned that you may jump out of a third story window. As Terrence McKenna pointed out, psychedelics can lead to vast understandings and expansive changes to ones life that would push them to begin changing how they live life.

Modafinil - the time-shifting drug The wonders of pharmacology keep appearing regularly, each new drug seemingly too good to be true. In recent times there have been several killer apps for the drug industry – chemical substances that replace depression with a happy disposition or bolster a flagging sex drive to royal command performance (with encore) levels. Prozac and Viagra provided benefits so compelling they have entered everyday language and have a global following. Now there’s another “drug-most-likely-to-succeed” – this one enables you to stay awake for 40+ hours with close to full mental capacity with few side effects Modafinil improves memory, and enhances one's mood, alertness and cognitive powers. Marketed as Provigil ', 'Aletec' and 'Vigicer', Modafinil is a psychostimulant approved by the US Federal Drug Administration for improving wakefulness in patients with excessive sleepiness associated with shift work sleep disorder, obstructive sleep apnea / hypopnea syndrome and narcolepsy. So how good is it?

Single dose of hallucinogen may create lasting personality change Thursday, September 29, 2011 Psilocybn A single high dose of the hallucinogen psilocybin, the active ingredient in so-called "magic mushrooms," was enough to bring about a measureable personality change lasting at least a year in nearly 60 percent of the 51 participants in a new study, according to the Johns Hopkins researchers who conducted it. Lasting change was found in the part of the personality known as openness, which includes traits related to imagination, aesthetics, feelings, abstract ideas and general broad-mindedness. Changes in these traits, measured on a widely used and scientifically validated personality inventory, were larger in magnitude than changes typically observed in healthy adults over decades of life experiences, the scientists say. Researchers in the field say that after the age of 30, personality doesn't usually change significantly. "Normally, if anything, openness tends to decrease as people get older," says study leader Roland R.

Coffee vs. beer: which drink makes you more creative? — What I Learned Today I didn’t know what I was going to write about today. When this happens, normally I grab a coffee to help get the ideas flowing, but for the last few days in Montreal, no one’s been allowed to drink the water due to a bacteria leakage, which also means, no coffee. So instead, I grabbed the next best thing to help me get going - a beer. This got me wondering about coffee and beer and which one would actually help me be more creative and get work done. Hopefully, this will help you decide when it’s best to have that triple shot espresso or ice cold brew. What is creativity really? From a scientific perspective, creativity is your ability to think of something original from connections made between pre-existing ideas in your brain. These connections are controlled by neurotransmitters like adenosine, which alerts your brain when you’re running out of energy and reacts by slowing down the connections made between neurons by binding to adenosine receptors. Your brain on coffee The result?

DMT, Moses, and the Quest for Transcendence by Cliff Pickover, Reality Carnival "DMT in the pineal glands of Biblical prophets gave God to humanity and let ordinary humans perceive parallel universes." The molecule DMT (N,N-Dimethyltryptamine) is a psychoactive chemical that causes intense visions and can induce its users to quickly enter a completely different "environment" that some have likened to an alien or parallel universe. Author Terence McKenna has used DMT and feels that, "Right here and now, one quanta away, there is raging a universe of active intelligence that is transhuman, hyperdimensional, and extremely alien... DMT is also naturally produced in small quantities in the human brain, and it has been hypothesized that DMT is produced in the pineal gland in the brain. Is it possible that the reality exposed to humans by injecting DMT is in some sense a valid reality, on par with our normal reality? What is the guarantee that our minds are naturally designed to sense the "true reality"? Responses from Readers

Why 'Breaking Bad' Should Be Set in China Above: a Thai policeman guards a shipment of meth pills smuggled from China It was in China that I was introduced to meth. Specifically, it was thanks to Beijing's pirated DVD shops that I first saw Breaking Bad, or as my dealer knew it, 绝命毒师 jué mìng dú shī—literally, “deadly drug master.” Since returning to the US and a Netflix account, I've been able to partake in the ugly, tangled moral struggles of Walter White under more legal circumstances. But I haven't been able to get China out of my head. If you’ve ever seen the show, you probably know that most of the meth in the US comes from Mexico. Records of large drug busts involving meth in recent years--an increasingly common occurrence--tend to show a trail that leads back to China. American officials now estimate that 80 percent of the meth consumed in the US is Mexican-made--with ingredients from China. In these rural areas in China, meth has become popular among populations not previously pegged as drug users. (via) Our Chinese Mr.

Related:
Related:  Drugs and Use