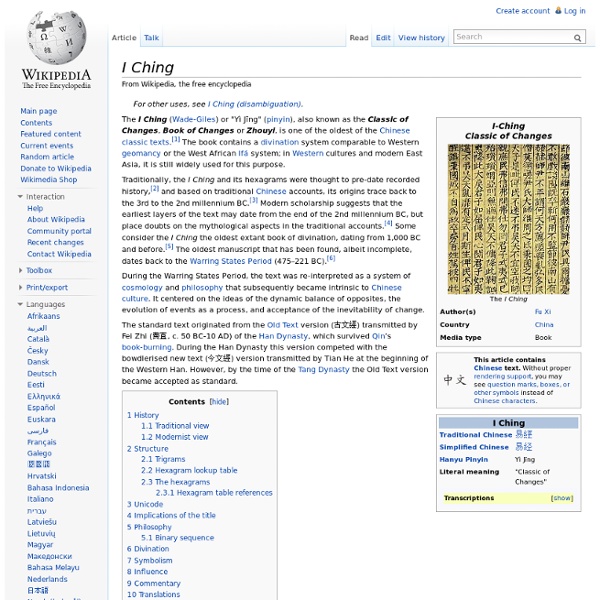 The I Ching, also known as the Classic of Changes, Book of Changes, Zhouyi and Yijing, is one of the oldest of the Chinese classic texts.[1] The book contains a divination system comparable to Western geomancy or the West African Ifá system; in Western cultures and modern East Asia, it is still widely used for this purpose. Traditionally, the I Ching and its hexagrams were thought to pre-date recorded history,[2] and based on traditional Chinese accounts, its origins trace back to the 3rd and 2nd millennia BCE.[3] Modern scholarship suggests that the earliest layers of the text may date from the end of the 2nd millennium BCE, but place doubts on the mythological aspects in the traditional accounts.[4] Some consider the I Ching the oldest extant book of divination, dating from 1,000 BCE and before.[5] The oldest manuscript that has been found, albeit incomplete, dates back to the Warring States period (475–221 BCE).[6] History[edit] Traditional view[edit] Modernist view[edit] Structure[edit]

30 Books You Should Read Before You're 30 The best books aren't static stories, but living entities with meanings that change and grow along with you. That's why we strongly recommend rereading the classics that were assigned to you in high school; you may find that they're nothing like they were before. Still, some books are best experienced at a certain age, like, say, "Catcher in the Rye." If you pick it up for the first time when you're far beyond puberty, you'll likely wonder what all the hype is about. Likewise, there are certain books you should read in your 20s, due to the age of the characters or the intended audience -- books like Donna Tartt's "The Secret History" or Christopher Hitchens' "Letters to a Young Contrarian."

en.m.wikipedia There are many cases documented before and around Warring State period in writing about the oracle used referring to the changed hexagram and the changed lines. This practice is earlier than many schools of Chinese philosophy including Confucius (who has studied the oracle itself and try to interpret if not by him but definitely by his school). It is also used by the later school such as the School of Yin-Yang. As I Ching is the only few books that were not burnt and its status as one of the key five books used by examination for government official for more than 2,000 years, many know its rules and interpretation. Animal Symbolism in Celtic Mythology <editorial date="2007"> This document is readable by you today, almost 14 years after I wrote it and more than 12 years after I put it on the web, because of open formats. In this specific case, the format is HTML 2. Can we say the same thing about word processing documents, spread sheets and other office documents?

www.britannica THIS IS A DIRECTORY PAGE. Britannica does not currently have an article on this topic. Assorted References celibacy In celibacy: The religions of AsiaAdherents of Chinese Daoism include monastics and independent celibate adepts. Family tree of the Greek gods Key: The essential Olympians' names are given in bold font. See also List of Greek mythological figures en.m.wikipedia Hermann Alexander Graf[1] von Keyserling (20 July [O.S. 8] 1880 – 26 April 1946) was a Baltic German philosopher from the Keyserlingk family. His grandfather, Alexander von Keyserling, was a notable geologist of Imperial Russia. Life[edit]

Mount Olympus Olympus' highest peak, Mytikas Every year thousands of people visit Olympus to admire its nature, to tour its slopes, and reach its peaks. Organized mountain refuges and various mountaineering and climbing routes are available to visitors, who want to explore its nature. The usual starting point for it is the town of Litochoro, on the eastern foothills of the mountain, 100 km from Thessaloniki, where, in the beginning of every summer, the Mountain Olympus Marathon terminates. Geography[edit] The shape of Olympus was formed by rain and wind, which produced an isolated tower almost 3,000 metres (9,800 ft) above the sea, which is only 18 kilometres (11 mi) away at Litochoro.

I Ching Wilhelm Translation I Ching Wilhelm Translation, 1950 1. Ch'ien / The Creative above CH'IEN THE CREATIVE, HEAVEN below CH'IEN THE CREATIVE, HEAVEN The first hexagram is made up of six unbroken lines. These unbroken lines stand for the primal power, which is light-giving, active, strong, and of the spirit. The hexagram is consistently strong in character, and since it is without weakness, its essence is power or energy. Patrick Rothfuss - Official Website Read more reviews THE POWERFUL DEBUT NOVEL FROM FANTASY'S NEXT SUPERSTAR Told in Kvothe's own voice, this is the tale of the magically gifted young man who grows to be the most notorious wizard his world has ever seen.The intimate narrative of his childhood in a troupe of traveling players, his years spent as a near-feral orphan in a crime-ridden city, his daringly brazen yet successful bid to enter a legendary school of magic, and his life as a fugitive after the murder of a king form a gripping coming-of-age story unrivaled in recent literature. A high-action story written with a poet's hand, The Name of the Wind is a masterpiece that will transport readers into the body and mind of a wizard.