Last Drop : Pumping Up Till The Last Drop From The Bottom of A Bottle 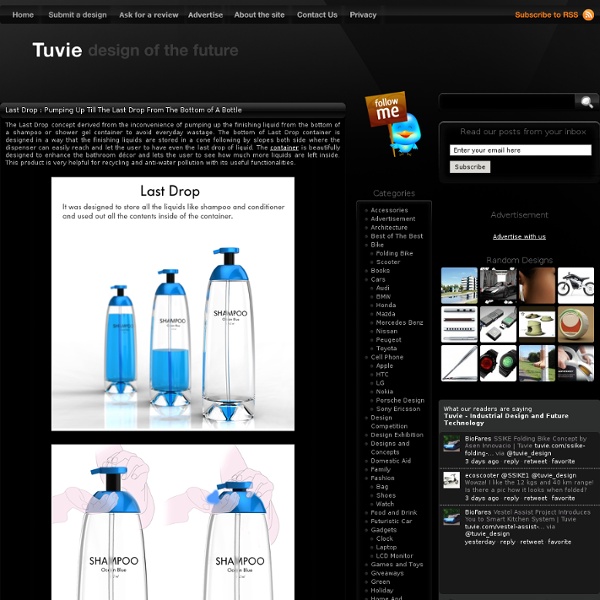 The Last Drop concept derived from the inconvenience of pumping up the finishing liquid from the bottom of a shampoo or shower gel container to avoid everyday wastage. The bottom of Last Drop container is designed in a way that the finishing liquids are stored in a cone following by slopes both side where the dispenser can easily reach and let the user to have even the last drop of liquid. The container is beautifully designed to enhance the bathroom décor and lets the user to see how much more liquids are left inside. This product is very helpful for recycling and anti-water pollution with its useful functionalities. Designer : Seonkeun Park and Jinsun Park Related:  teaching subjects

10 Most Unusual Mirrors - Oddee.com (cool mirror, creative mirrors) Razorblade Mirror A nice piece of design from Suck UK, the Razorblade Mirror is based on the shape of a typical razorblade. Designed by Phil Sims and ideal for a novelty shaving mirror or just an interesting decoration for your living room wall, it's even got the name of the most famous razorblade-user of all on the front - Sweeney Todd. Razor Blade Mirror is selling for £74.99. The price is pretty high for a mirror. Narcisse Mirror French design brand Domestic has launched a collection of mirrors by various designers including Matali Crasset, 5.5 Designers and Ich&Ka. Ironing Board Mirror An interesting concept by designer Aïssa Logerot, this innovative mirror can be used as ironing board when it's tilted and secured on horizontal position. How Tall Are You Mirror Are you mini like Kylie? Touch Screen MP3 Mirror Interactive Mirror Conceptualized by Alpay Kasal, this is a patent pending touch capable mirror. Interactive Mirror from Alpay Kasal on Vimeo. Tetris Mirror Eclipse Mirror Weave Mirror

9 Hilarious Wall Hook Designs 10 Ships with Unusual Large Cargo Heavy lift vessels are quite amazing vessels, built to load, carry and discharge large, unusual shaped cargoes (or even smaller vessels) that will simply not fit inside the holds of conventional vessels. Unusual cargoes can include power plants, submarines, desalination units,oil platform, generators and yachts. Continue reading Top 10 Weirdest Places Around the World Did you know there is a cinema in the middle of the desert? Continue reading Breathtaking Libraries Around the World Everyone has some kind of place that makes them feel transported to a magical realm. Continue reading 9 Cool Gadgets That Everyone Wants to Have at Home From a secret agent-like popup garage to a Lego wall, take a look at these 9 things you definitely want in your home. Continue reading 6 Wicked Beach Sculptures Placed Just To Scare You Continue reading Strangest Graveyards Around the World From a Phone booth graveyardto the Coke machine graveyard. Continue reading

Simple mechanisms explained Email Below you’ll find animated diagrams and explanations of how various mechanisms work. Some of these have been crucial to major evolutions in mechanisms and technology, and allow us to do anything from fire weaponry to make cars move with the press of a pedal. Maltese Cross mechanism powers second hand movement in the clock: Radial engines are used in aircraft. Reciprocating movements power steam engines in locomotives: Sewing machine: Manual transmission mechanism, also known as “stick shift” is used to change gears in vehicles: This mechanism is called constant-velocity joint and is used in front-wheel drive vehicles: Torpedo-boat destroyer system is used to destroy fleet in naval military operations: The Wankel engine is a type of internal combustion engine which uses a rotary design to convert pressure into a rotating motion instead of using reciprocating pistons: + Bonus – mechanism you can watch forever Leave your comment: You may also like these posts:

Anthropomorphic + Futuristic = Fantastic Floating Homes Futuristic, yet, but not the far-fetched science-fiction fantasy industrial design you might think – the Oculus by Schoepfer Yachts may not be for sale yet but it is already in pre-production mode with naval architects on board, so to speak. Hardly your typical houseboat, it is a virtual cruise ship for the rich and famous who can afford to buy it when it is fully planned and built. The anthropomorphism of this luxury floating home is of course intentional – the front deck like the gaping mouth of a gigantic sea creature and the sleek curves mimicking streamlined oceanic animals. Complete with a swimming pool on top and a futuristic interior design this is far more like a permanent mobile home than a cruising yacht. The smaller and simpler (both adjectives applied relative to its bigger brother of course) version of this spectacular design is the Infinitas, with a more sleek and streamlined profile and a semi-enclosed on-board swimming pool in the center but underneath the shell.

15 Coolest Pillows - Oddee.com (cool pillows) Blood Puddle Pillow If your idea of a good time is tricking people into thinking you've been shot, these blood puddle pillows are perfect for you. Inspired by those suspenseful moments when a sleeping loved one is a little too still for a little too long, they are an irreverent combination of comfort and fear. Alarm Clock Pillow This pillow is designed to gently wake you by exposing your eyes to a glowing cloud of illumination, gradually increasing in brightness over a 40 minute period. You can see time on the pillow’s surface too. Alt-Ctrl-Del Pillows Reboot your livingroom with this three-pillow set, that look as if they’ve jumped right off your keyboard. iSleep Laptop Pillow Developed by Ivonne Dippmann, the i-Sleep pillow works in unison with your laptop and could transpire to be an indispensable travel gadget for those needing a little shut-eye whilst jet-setting to their next business appointment. Emoticon Pillows How are you feeling? Tissue-dispensing Pillow Fresh Salmon Pillow

Plastic Mobile Phone Holder 10 Bizarre Predictions That Just Might Come True | Feature Articles | Astrology Predicating the future used to belong to the world of psychics and mystics, but now you don’t need to be Nostradamus to see what the future holds. In fact, scientists are increasingly making bold predications about the future. If some of their forecasts are right then we could be living in a "brave new world". We take a look at 10 bizarre predictions that might just come true. 10. Invisibility cloak What would you do if you could be invisible for a day? 9. Ray Kurzweil , a leading expert in the field of technology claims that by 2050 computers could be so powerful that we can actually download our brains into a computer – giving us eternal life. 8. British Telecoms futurology department predict that we could be under the global robot dictator as early as 2021. 7. The ministry of defence released a report last year in which they claim that an implantable brain chip will embedded in the brain and allow the state, terrorist organisations and criminals to use people to mobilise flash mobs

Sleep With The Fishies: Shark Sleeping Bag Ever wanted to sleep inside a shark? Me neither, I've just always wanted to cuddle. But if you're in college and want to experiment before settling down in a relationship, make sure to get your roommate blackout drunk first. Then when he wakes up in the morning and can't remember anything tell him he had a fine-ass girl over. It's a sleeping bag! The bag is available for pre-order now and ships in the fourth quarter. Hit the jump for one more shot of the awesomeness. Product Site viaKendra Phillips' Portfolio Thanks to Erika and bunnyman, who have only slept in dolphins.

Wooden Peg Heads Up, Hoverboarders: Here Comes Quantum Levitation Few motifs of science fiction cinema have been more appealing to us than the subtle defiance of gravity offered by futuristic hovercraft. So every once in a while we check in to see how humanity is progressing on that front, and whether the promise of hoverboards will be delivered by 2015 as evidenced in Back to the Future Part 2. We’re not quite there yet, but we’re definitely getting off the ground, so to speak. Get ready to hover your brain around the art of quantum levitation. That’s right, quantum. Because of its chemical properties, a superconductor (when brought to low enough temperatures using, say, liquid nitrogen) exhibits this effect, causing the energy from the magnet below to warp around the superconductive object in a way which “locks” it in space. Even more impressive and ripe for practical transportation use: When the superconducting object is placed along a magnetic rail, it exhibits frictionless momentum. Connections: