10 Ways to Show Your iPad on a Projector Screen 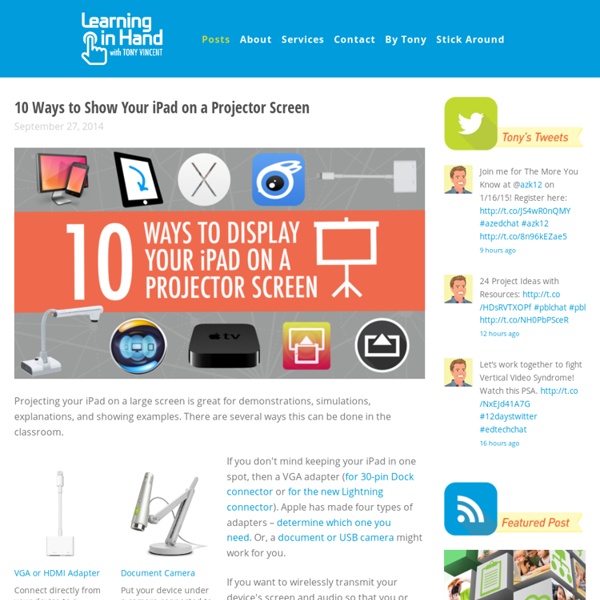 If you don't mind keeping your iPad in one spot, then a VGA adapter (for 30-pin Dock connector or for the new Lightning connector). Apple has made four types of adapters – determine which one you need. Or, a document or USB camera might work for you. If you want to wirelessly transmit your device's screen and audio so that you or your students can walk around the room, then it gets more complicated. You'll tap into Apple's AirPlay feature that is built into all iPad 2s and newer, including iPad mini. AirPlay works over Wi-Fi and requires all devices using it to be on the same network (unless you're using the newest Apple TV and iOS 8–then you can use a peer-to-peer connection). Apple TV is a small black box that can connect to a projector. iPad can mirror wirelessly to Apple TV using AirPlay. If you already have a computer connected to your projector, you should look into using software to turn that Mac or Windows PC into an AirPlay receiver.

Why Teachers Are Trying Out Apple TV In The Classroom Apple TV is a little black box that can work miracles in a classroom. Built largely for entertaining purposes by Apple, Apple TV is used increasingly in the classroom by educators who primarily want to take advantage of the mirroring capabilities of the device. For those who are not familiar with the term “mirroring”, simply put, a key feature in Apple devices called “AirPlay” can literally mirror or project your device’s screen (iPod/iPad/iPhone), via an LCD projector that is connected to the Apple TV. Google Glass receives regulatory approval in Canada Google Glass is one step closer to a wider release in Canada, after receiving approval from Canadian regulators, the company confirmed to the Financial Post on Friday. The Google Inc.-made computerized eyeglasses — currently available to a limited number of Canadians who are part of its Google Glass Explorer program — got the go-ahead from Industry Canada this summer, said Aaron Brindle, a Google Canada spokesperson. “Glass has regulatory approval from Industry Canada and we’re super excited to bring Glass north of the border,” he said in an e-mail. “We don’t have a timeframe to share at this time, but Glass will comply with all regulations when it launches in Canada.” Last month, the tech blog Android Police reported an Explorer in Louisiana received his Google Glass with a card that said the device was approved for use by Industry Canada.

Five Tips for Supporting iPads in the Classroom Published Online: November 7, 2012 By Jennie Magiera Schools across the globe have begun investing in iPad tablet computers, hoping these devices will magically transform their learning environments. How to be a TERRIBLE iPad Teacher The following is a list, written in the first-person, of ideologies or stances from a Terrible iPad Teacher: 1. I own an iPad and I use it in class. I am, therefore, an effective Twenty-First century educator . Google in Education Articles exploring the usefulness of Google apps in education. Inside The 3D Cities of Google Earth gearthblog.com Photo: gearthblog.com Also

50 really useful iPad 2 tips and tricks An absolute gem of an article by John Brandon and Graham Barlow from MacLife on 30th March over at TechRadar. This is going to become my iPad manual from here on in. Customised iPads for all iPad 2 tips and original iPad tips - get 'em here! With great new features like two video cameras, a faster processor and a thinner design, the iPad 2 is the world's best tablet device. 23 Ways To Use The iPad In The 21st Century PBL Classroom By Workflow 23 Ways To Use The iPad In The 21st Century PBL Classroom by TeachThought Staff The iPad is not magic, and as many educators have found integrating them meaningfully is by no means a just-add-water proposition. The same applies to Project-Based Learning. Project-Based Learning is a method of giving learners access to curriculum in authentic ways that promote collaboration, design, imagination, and innovation while also allowing for more natural integration of digital and social media. Below we’ve offered 23 ways that the iPad can be used in your classroom.

6 Good Chromebook Apps for Recording and Editing Audio October 30, 2014 Awhile back I received couple of emails from some teachers asking about some app recommendations to record and edit audio on Chromebooks. Below are some of the good tools I would suggest for this purpose. Please have a look and share with us what you think of them. Amazing One Stop Website For iPad Resources For Education… There’s Really Is An App For That I remember the first time I saw the Apple iPad. It was so much more than a cool toy, after all I also remember the Apple Newton. I knew there was no reason to debate whether the iPad had a place in the classroom. It was evident that it was a brilliant and amazing piece of technology for educators and students, regardless that it didn’t have quite enough Flash. If you are a current user of the iPad, exploring its possibilities, or maybe getting ready to implement it in the classroom, then be sure to check out this incredible app.

iOS 5/iPad 2 proxy settings not being remembered That, is NOT a fix. That will also allow every single person on your site to access the internet as a single user... bypassing any security and accountability the company needs to uphold. As I work in education, that would be a HUGE "duty of care" issue. I'd get a repremand for even suggesting it. I HAVE tried similar work-arounds as a proof of concept, and found the best and easiest is "Authoxy".

iPad Workflow Solutions for Educators Recently, I attended ITEC 2012 -Iowa’s premier technology conference for educators. David Pogue and Marco Torres were the keynote speakers, but there were dozens of other excellent breakout sessions over the course of this three-day event. I myself had the opportunity to present twice, so I opted for a couple of iPad sessions that I had been wanting to talk about for some time now, and I have included the slides to the first of these two sessions below – iPad Workflow Solutions for Educators. A digital workflow for the iPad, or the process of getting student work to and from the device, has long been a subject of some consternation among those who use iPads in the classroom.

Educational Conferences and the ethics of EdTech Over the last two days I attended a digital teaching conference. Like all conferences where educators get together to talk about technology, there was plenty of sharing about useful apps and tools to use in the classroom. I went to 8 different sessions where people talked about the purposeful use of technology in education and showed examples of how students are learning with these tools. But as the conference went on I also noticed a worrying trend. How Tablets Can Enable Meaningful Connections for Students and Teachers By Justin Reich and Beth Holland In this four-part series, we have been charting a course for teachers working in classrooms with tablets. We began by looking at the consumption of content -- the default uses of tablets -- and then progresses through the the curation of learning artifacts, and the creation of new projects or activities.