Places That Are Actually Real But Don't Look So 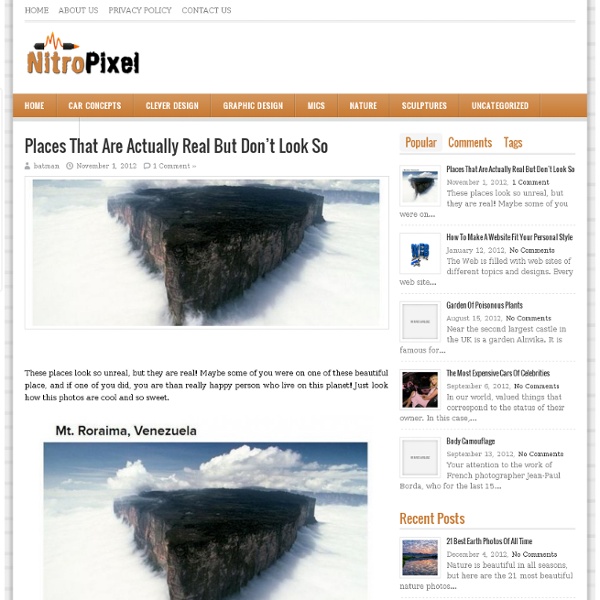 These places look so unreal, but they are real! Maybe some of you were on one of these beautiful place, and if one of you did, you are than really happy person who live on this planet! Just look how this photos are cool and so sweet.

39 of the world’s most inspiring routes for road trips [PICs] Whether it’s Utah or Iceland, something about a seemingly endless and open road makes me want to travel. The Frame: Feature pictures from 2008 As part of our three-day look back at some of best pictures of year, today we look at feature pictures from around the world in 2008. (26 images) In this July 11, 2008 photo, two Chinese girls peek underneath a billboard covering a construction site in Beijing. AP / Oded Balilty In this Feb. 6, 2008 photo, Indian children peek out of a tent at Sangam, the confluence of the Ganges and Yamuna rivers during the annual traditional fair of Magh Mela in Allahabad, India. AP / Rajesh Kumar Singh In this Feb. 9, 2008 photo, Palestinian youths and children play during sunset in the West Bank city of Ramallah.

Too beautiful to be real? 16 surreal landscapes found on Earth These bizarre locations may seem like a series of elaborate movie sets, but they are real destinations that you might want to see for yourself. Photo: Greg Mote/Flickr The Wave, Arizona, U.S. Photo: Shutterstock Travertines, Pamukkale, Turkey Photo: Shutterstock Completely Useless, Yet Interesting, Facts Collection This is a web site of all the useless facts, cool trivia, and interesting information that have been collected from various sources over the past few years. True to its name, most of the facts are useless, but many of them may actually help you in the future. Random Facts Giraffes are the only animals born with horns. Both males and females are born with bony knobs on the forehead.

The 10 best treks in the world These 10 classic treks are for serious walkers. All of them require a sturdy pair of lungs, fit legs and a good amount of preparation. However, if you choose to go on any of these trails then you will be rewarded with experiences that last a lifetime. In no particular order: Winners of the National Geographic Photo Contest 2012 - In Focus The winners have just been announced of this year's National Geographic photo contest. The Society received more than 22,000 entries from over 150 countries. Presented here are the winners from the three categories of People, Places, and Nature, captions provided by the photographers. The Grand Prize Winner receives $10,000 and a trip to National Geographic headquarters in Washington, D.C., to participate in the annual National Geographic Photography Seminar in January 2013. Be sure to also see earlier In Focus collections of entries: Part I and Part II. [14 photos] Use j/k keys or ←/→ to navigate Choose:

Remember Me Concept Art by Paul Chadeisson Concept artist Paul Chadeisson has released concept artwork he created for Remember Me(previously known as Adrift), a video game developed by Dontnod Entertainment. Paul collaborated with fellow concept artist Aleksi Briclot and Michel Koch to create the world of Neo-Paris 2084. Make sure to click on images to enlarge. Link: paul.chadeisson.fr All images used with permission by the artist. © Capcom. All rights reserved. The World Factbook People from nearly every country share information with CIA, and new individuals contact us daily. If you have information you think might interest CIA due to our foreign intelligence collection mission, there are many ways to reach us. If you know of an imminent threat to a location inside the U.S., immediately contact your local law enforcement or FBI Field Office.

10 Best Hiking Trails in the World If everyone placing personal ads who claimed the hobby of “hiking” really did it with any regularity, the earth would have been trampled flat decades ago. But those who really do enjoy this peaceful outdoor activity have plenty of incredible choices in every corner of the world. Here are the ten best hikes on the planet, each with a combination of scenery and special extras that make them well worth going out of your way to enjoy. You can use Indie, BootsnAll’s multi-country flight finder, to search and book flights for your trip. Plan a round the world trip around these great hiking spots, and sign up for Plan Your RTW Trip in 30 Days to learn the ins and outs of planning a trip of this magnitude (it’s free!). Tongariro Northern Circuit, North Island, New Zealand

A Forest Of Symbols: Life Of Pi and Chaos Why is this film so good? To receive 11 nominations from the Academy Awards, including Best Director and Best Picture, is no small feat, and it won 4 awards, more than any other film this year (Best Director, Cinematography, Visual Effects and Original Score). How can a film receive so much praise, even elevating it to the level of "the miraculous?" For two reasons: first, it teaches us that miracles do exist; secondly, it teaches us the power of art.

900-Year-Old Viking Message Solved! Photo by Jonas Nordby via forskning.no For the past several years researchers have been trying to crack a Viking rune alphabet known as Jötunvillur, a perplexing code dating back to the 11th or 12th century that’s been found in some 80 inscriptions including the scratched piece of wood found above. Recently runologist (!) Jonas Nordby from the University of Oslo managed to crack the code and discovered the secret message etched into this particular 900-year-old object reads “Kiss me.” Via Medievalists.net: For the jötunvillur code, one would replace the original runic character with the last sound of the rune name. Amazing Places To Experience Around The Globe (Part 2) Tian Tan Buddha on Lantau Island, Hong Kong Fernando De Noronha - Brazil Spirit Island, Magligne Lake, Alberta, Canada Rice Field Terraces in Yunnan, China Bern, Switzerland

40 Of The Most Powerful Photographs Ever Taken Sisters pose for the same photo three separate times, years apart. A Russian war veteran kneels beside the tank he spent the war in, now a monument. A Romanian child hands a heart-shaped balloon to riot police during protests against austerity measures in Bucharest.