Urban Europe — statistics on cities, towns and suburbs - Statistics Explained. Click on the image for an interactive view of the data Executive summary 1. 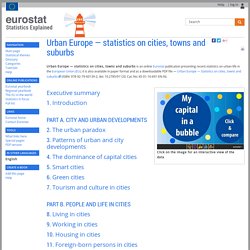 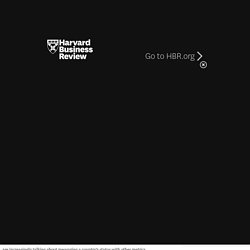 But for measuring national success, it has long been pretty much the only thing (other than, of course, sports). The specific metric that has prevailed since World War II is the dollar value of a country’s economic output, expressed first as gross national product, later as gross domestic product. This is an improvement over ranking by military victories—the most time-honored gauge. And the era of GNP and GDP has been characterized by a huge global rise in living standards and in wealth. Daily chart: The world’s most “liveable” cities. WHILE residents of Melbourne enjoy another year in the world’s most liveable city, according to the 2015 Global Liveability Ranking from our corporate cousin the Economist Intelligence Unit, spare a thought for those who live in the 57 cities that have steadily deteriorated over the last five years. 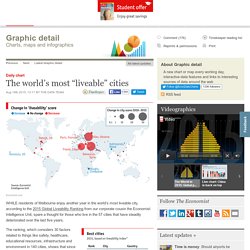 The ranking, which considers 30 factors related to things like safety, healthcare, educational resources, infrastructure and environment in 140 cities, shows that since 2010 average liveability across the world has fallen by 1%, led by a 2.2% fall in the score for stability and safety. Understanding How Gallup Uses the Cantril Scale. The Cantril Self-Anchoring Striving Scale (Cantril, 1965) has been included in several Gallup research initiatives, including Gallup's World Poll of more than 150 countries, representing more than 98% of the world's population, and Gallup's in-depth daily poll of America's wellbeing (Gallup-Healthways Well-Being Index; Harter & Gurley, 2008). 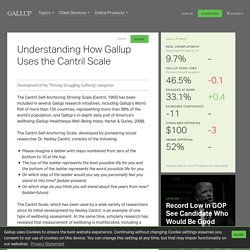 The Cantril Self-Anchoring Scale, developed by pioneering social researcher Dr. Hadley Cantril, consists of the following: Please imagine a ladder with steps numbered from zero at the bottom to 10 at the top.The top of the ladder represents the best possible life for you and the bottom of the ladder represents the worst possible life for you.On which step of the ladder would you say you personally feel you stand at this time? Standard of living. Standard of living refers to the level of wealth, comfort, material goods and necessities available to a certain socioeconomic class in a certain geographic area. 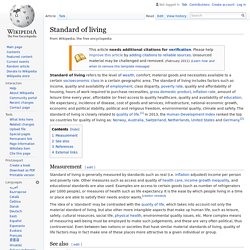 The standard of living is closely related to quality of life.[1] In 2013, the Human Development Index ranked the top six countries for quality of living as: Norway, Australia, Switzerland, Netherlands, United States and Germany.[2] Herzberg's Motivators and Hygiene Factors - from MindTools.com. Learn how to Motivate Your Team © VeerSergey Nivens Enabling your people to move forward motivates them. 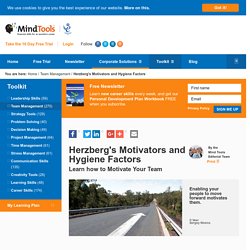 What do people want from their jobs? Do they just want a higher salary? Understanding How Gallup Uses the Cantril Scale. Monocle’s 2015 Quality of Life Survey: Melbourne is better than Sydney. Sydney Harbour and Harbour Bridge are seen from Circular Quay. 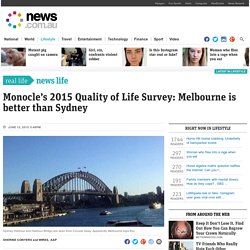 Apparently Melbourne tops this. SHERINE CONYERS and WIRESAAP SYDNEYSIDERS might not want to hear it, but apparently Melbourne is a better place to live. Monocle's Quality of Life Survey Is an Alternative Top Destinations for 2015 – Skift. The annual Quality of Life Survey in Monocle magazine’s July issue has always functioned as an un-Places to Go list, with a collection of cities that are excellent places to live, work, and enjoy life rather than take a selfie atop a high-altitude attraction or embark on a safari. 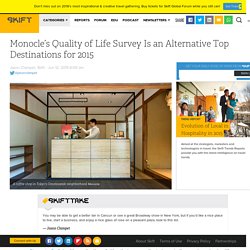 For travelers, the list is typically one of second- or third-tier cities, mostly in northern Europe but also Australia and Asia. North and South America appear infrequently and Africa and the Middle East have never ranked. Neither has an Italian city, for that matter. The Value of Rankings and the Meaning of Livability. Since first using the term “livable cities” back in the 1980s to describe quality of life and the characteristics of cities that make them livable, IMCL has seen the term used in countless ways to describe standard of living, rather than quality of life. 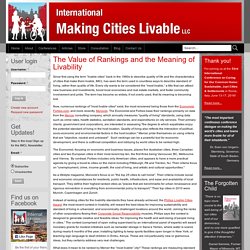 Every city wants to be considered the “most livable,” a title that can attract new business and investments, boost local economies and real estate markets, and foster community involvement and pride. The term has become so widely, if not overly used, that its meaning is becoming lost. How does your city compare to others? New ISO standard to measure up (2014-05-14) A landmark ISO standard outlining key measurements for evaluating a city's service delivery and quality of life has just been published. 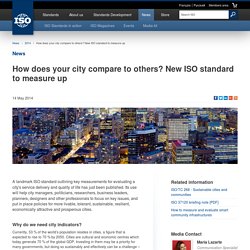 Its use will help city managers, politicians, researchers, business leaders, planners, designers and other professionals to focus on key issues, and put in place policies for more livable, tolerant, sustainable, resilient, economically attractive and prosperous cities. Why do we need city indicators? Currently, 53 % of the world’s population resides in cities, a figure that is expected to rise to 70 % by 2050. Cities are cultural and economic centres which today generate 70 % of the global GDP. The Balanced Scorecard—Measures that Drive Performance.

What you measure is what you get. Senior executives understand that their organization’s measurement system strongly affects the behavior of managers and employees. Executives also understand that traditional financial accounting measures like return-on-investment and earnings-per-share can give misleading signals for continuous improvement and innovation—activities today’s competitive environment demands. The traditional financial performance measures worked well for the industrial era, but they are out of step with the skills and competencies companies are trying to master today. As managers and academic researchers have tried to remedy the inadequacies of current performance measurement systems, some have focused on making financial measures more relevant. Others have said, “Forget the financial measures. Performance measurement. Daily chart: The world’s most liveable cities. COMING up with a list of the world’s best cities is a near-impossible task. The bustle and hum of megacities like São Paulo or Tokyo might be too much for some people; others might struggle with the pace of life in Cleveland or Frankfurt.

A ranking released on August 18th by our corporate cousin, the Economist Intelligence Unit, attempts instead to quantify the world’s most “liveable” cities—that is, which locations around the world provide the best or the worst living conditions. The World’s Most Liveable Cities - Our World. Do you live in the most liveable city in the world? But what does that really mean? We love ranking cities and attaching fancy titles to them. Perhaps you live in a global city? According to the American Journal of Foreign Policy, global cities are the most interconnected cities, serving as hubs for global integration and helping to set international agendas.

The top five global cities in 2014 were New York, London, Paris, Tokyo and Hong Kong. To Thrive, We Must Be In Touch With Each Other by Sarah van Gelder. Imagine that instead of reading these words on a screen, you are sitting across from me over a cup of coffee. You’re sharing your stories, and I’m sharing mine.

As we talk, we notice many things about each other, because our words are just a small part of what we communicate. I watch your eyes, which may be focused or may be darting to a cell phone. Net promoter: Creating a reliable metric - Loyalty Insights #2. Similar issues have cropped up at other companies, those that sell to consumers as well as those that sell to businesses. In the most serious cases, problems with the survey data lead people to mistrust the entire Net Promoter approach, thereby undermining its value.

Yet many Net Promoter practitioners have learned to compile accurate, trustworthy scores week in and week out. They generate high response rates from the right customers. They eliminate the many sources of bias that can contaminate the data. The precision and granularity of their scores enable them to learn more—and learn more quickly—about what their customers are thinking and feeling, so they can take appropriate action. In this article we will explore how they accomplish all these objectives. The Ultimate List of Net Promoter® Best Practice Tips. How to calculate Net Promoter Margin of Error and other stats. Most People Don’t Understand Sample Size. You’ve spent weeks working through the numbers to unpick what customers are saying.

After checking through the data and analysing a range of root causes, you have created a really practical plan to solve a key customer issue. Transactional Vs Relationship Customer feedback: Which is right for you? Relationship vs. Transactional Customer Satisfaction Surveys - FedPulse. Keeping your customers coming back for more requires knowing both the good and the bad about their interactions with and perceptions of your company.

The nature of those interactions dictates whether your customer satisfaction strategy is supported by transactional surveys, relationship surveys, or a combination of both. NPS Best Practices: The most effective way to send a Net Promoter Score℠ survey. What is the “right” number of customers for your organization? That depends on how concerned you are that your sample data are accurate. Net Promoter Network. Customer Experience Strategies: Set Your Business Apart with Net Promoter Score. A Startup’s Guide to Net Promoter Score - Retently. What's Common Between Companies With High Net Promoter Score? Why Doing In-App NPS Surveys Is a Bad Idea - Promoter.io Blog. I have made myself pretty unpopular lately by saying that In-App NPS is a huge mistake.

Especially because many customers that are coming to Promoter.io ask us about doing an in-app version. 55% of Visitors Spend Fewer Than 15 Seconds on Your Website. Should You Care? 3 Things You Can Learn from T-Mobile’s NPS Mistakes. Today, I got a text-based NPS® survey from T-Mobile. Deconstructing Apple's Transactional NPS Survey - Promoter.io Blog. It was fun to pick apart T-Mobile’s NPS mistakes recently. The "Secret" of Apple's Success: NPS as a measure of Customer Delight.