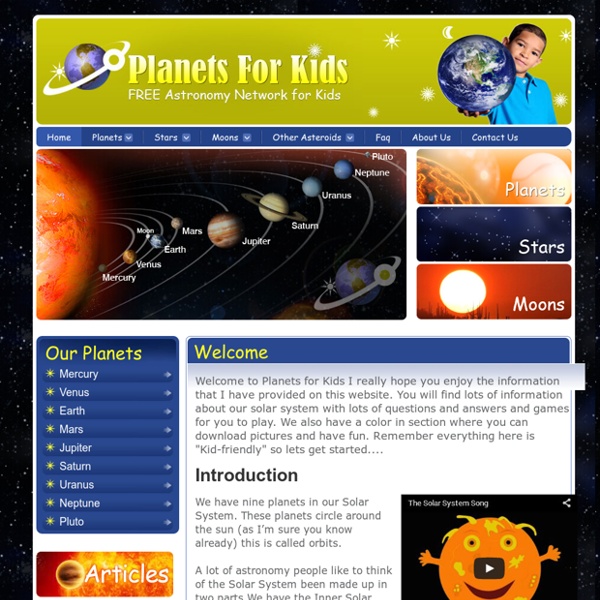 Introduction We have nine planets in our Solar System. These planets circle around the sun (as I’m sure you know already) this is called orbits. A lot of astronomy people like to think of the Solar System been made up in two parts We have the Inner Solar System which has Mercury, Venus, Earth and not forgetting Mars. These are closest to the sun and are called the terrestrial planets simply because the have very solid rocky surfaces.

World Sunlight Map Watch the sun rise and set all over the world on this real-time, computer-generated illustration of the earth's patterns of sunlight and darkness. The clouds are updated daily with current weather satellite imagery. The Mercator projection used here is one way of looking at the spherical earth as a flat map. : Planets There are more planets than stars in our galaxy. The current count orbiting our star: eight. The inner, rocky planets are Mercury, Venus, Earth and Mars. The outer planets are gas giants Jupiter and Saturn and ice giants Uranus and Neptune. Beyond Neptune, a newer class of smaller worlds called dwarf planets reign, including longtime favorite Pluto. Planet Lineup

How Big is the Solar System? Copyright 1989 by Guy Ottewell Universal Workshop PO Box 102 Raynham, MA 02767-0102 Toll Free: 800-533-5083 Fax: 508-967-2702 Email: customerservice@universalworkshop.com This is a classic exercise for visualizing just how BIG our Solar System really is. Both the relative size and spacing of the planets are demonstrated in this outdoor exercise, using a mere peppercorn to represent the size of the Earth. Guy Ottewell has kindly given permission for this electronic presentation of The Thousand-Yard Model; his exercise is presented in its original form, indexed with a few anchors to help you find you way around the large file. We also include a catalog describing several Ottewell publications. Image of the planets courtesy of NASA.

9 children's books about the planets and solar system Sharing is caring - thank you for spreading the word! I often joke to my husband that studying the universe hurts my brain because it is just so incredible to wrap my head around how utterly vast the universe is. It is slightly easier for me to contemplate our solar system. Although our solar system is still very big, it does seem a bit more knowable than our entire universe. In any case, our whole family had a great time to learning about the planets and solar system during our space unit. MAVEN - Mars Exploration Program NASA Goddard hosted a live Google+ Hangout on Wednesday, Nov. 13 at 4 p.m. EST about MAVEN, NASA's next mission to Mars. Credit: NASA/GSFC MAVEN will examine the upper atmosphere of Mars in unprecedented detail. It's scheduled to launch no earlier than 1:28 p.m. EST Monday, Nov. 18, from Cape Canaveral Air Force Station in Florida.

Solar System, Solar System Information Our Cosmic Neighborhood From our small world we have gazed upon the cosmic ocean for thousands of years. Ancient astronomers observed points of light that appeared to move among the stars. They called these objects "planets," meaning wanderers, and named them after Roman deities—Jupiter, king of the gods; Mars, the god of war; Mercury, messenger of the gods; Venus, the goddes of love and beauty, and Saturn, father of Jupiter and god of agriculture. The stargazers also observed comets with sparkling tails, and meteors or shooting stars apparently falling from the sky.

skeleton Function of the Skeleton This interactive site is about the function of our skeleton. Interactive Skeleton A fantastic interactive resource about the skeleton and joints. Skeletons and muscles This game features animals in the UK television Deadly 60 show. Astronomy For Beginners...Links Heres some astronomy links for you, some of them pages I found useful when I've been looking for information. If you have any good astronomy links or have your own site you would like me to link to you can submit them (although I would appreciate a link in return!). For a list of the very best personal astronomy sites in my opinion have a look at the list of winners of my website award Please remember: I am not responsible for the content of these external sites.