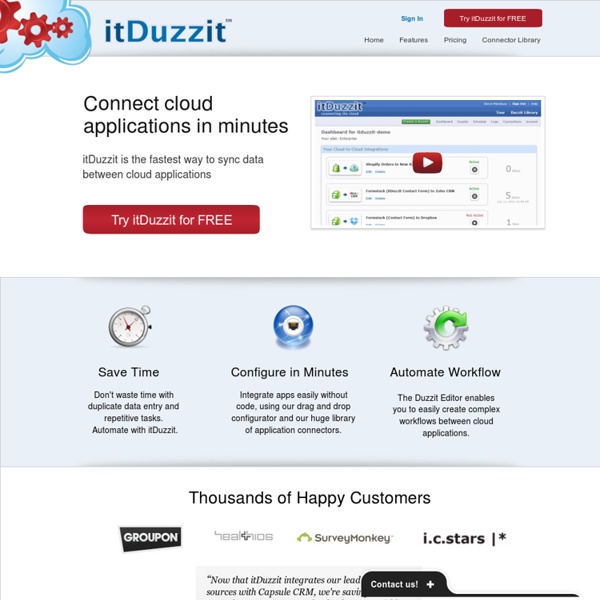 Don't waste time with duplicate data entry and repetitive tasks. Automate with itDuzzit. Integrate apps easily without code, using our drag and drop configurator and our huge library of application connectors. The Duzzit Editor enables you to easily create complex workflows between cloud applications. itDuzzit is the fastest way to sync data between cloud applications to discuss your integration needs

We-Wired Web 10 Common Mistakes Made by API Providers Twitter was one of the first to see what happened when traffic to the site came more from the API than the Web. It now has more than 65 million tweets per day, most coming from services that use the Twitter API. Twitter has made numerous changes to fix its API. Industrial and Military Grade USB Flash Memory Disks (Drives) Amtron supplies the following authentic industrial grade SLC USB flash disks (drives) to military, medical, and industrial customers. These industrial grade single-level cell (SLC) USB flash memory drives are designed for industrial, medical, and military applications and are much more durable and reliable than the consumer grade and the "industrial" consumer-grade multi-level cell (MLC) USB flash disks. The industrial grade USB flash disks are built to endure severe operating environments such as extreme cold and hot temperatures, continuous vibration, high shock impact, intensive read-write cycles, etc. The industrial grade USB flash memory disk features vital benefits such as wear-leveling, error correction, sustained write speed, shock and vibration strength, and temperature range extension. Such features are essential to industries that require a more robust and rugged digital storage option to ensure repeatable and reliable operation.

Solutions Our easy to use and extendable REST API allows developers to quickly integrate Iron.io with various third party services for work offload, data ingestion, buffering, and more. Below are a few examples complete with source code. Mozilla Developer Network Modify and extend Mozilla applications Add-ons add new functionality to Gecko-based applications such as Firefox, SeaMonkey, and Thunderbird. There are two main types of add-on: Extensions add new features to the application, while Themes modify the application's user interface. Add-ons can greatly affect the behavior of the application that hosts them. We've developed a set of guidelines to help ensure that they provide a good experience to users.

Preserving human knowledge: similar projects - The Knowledge The notion of preserving human knowledge for posterity, in sum total or at least a condensed summary of the key principles, in case of a cataclysm that collapses civilisation is not a new one. As discussed more fully in the History of the Total Book blogpost, eighteenth-century encyclopaedia compilers were conscious of the fragility of past empires and made efforts to catalogue and preserve crucial information for society in the aftermath of a great catastrophe. One of the inspirations for me to begin researching and writing The Knowledge on this theme was James Lovelock’s 1998 essay on the threats to our modern civilisation and the necessity for a ‘Book for All Seasons’. And there have been a number of other, similar propositions since then. Kevin Kelly, a former editor of the Whole Earth Catalog and founder of Wired magazine, proposed the ‘Forever Book’ in 2004 and the ‘Library of Utility’ in 2011 – a remote mountain-top vault of books.

Create a database, as easily as a spreadsheet Organize better with linked sheets Link sheets like Clients and Projects, Candidates and Roles, or Tasks and Owners. Information updated in one place will be automatically updated on all linked views. Super simple way to work with Twitter API (PHP + CSS) In this post I want to illustrate a super simple way to work with Twitter API and PHP. In particular, this tutorial explains how to get public updates from Twitter public timeline and display them in a web page with a custom style using CSS. In order to get Twitter updates I used Twitterlibphp (a PHP implementation of the Twitter API) that allows you to take advantage of it from within your PHP applications. Using this simple method you can obtain awesome results like this: You can download the source code at the following link and reuse it for free in your web projects (you need PHP and APACHE): 1.

The Software-Defined Data Center The Software-Defined Data Center. A Dream Come True. The software-defined data center (SDDC) is a highly automated IT infrastructure that makes extensive use of virtualization technology in order to fully abstract underlying compute, storage and networking hardware, and make them accessible à la cloud services. The resources can then be accessed via APIs or through a management interface, and provisioned automatically through orchestration. This approach enables IT to respond and meet business needs much faster than ever before.