Run multiple queue jobs the same time, with Beanstalk and Supervisor?? - Laravel.io - The Laravel Community Portal. I have an app that will loop through a lot of domains and run CURL on them. 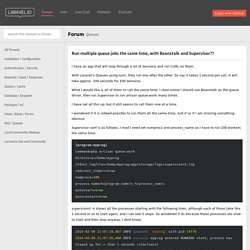 With Laravel's Queues using sync, they run one after the other. So say it takes 1 second per call, it will take approx. 100 seconds for 100 domains. What I would like is all of them to call the same time. I read online I should use Beanstalk as the queue driver, then run Supervisor to run artisan queue:work many times. I have set all this up, but it still seems to call them one at a time. Supervisord. An example of provisioning and deployment with Ansible. It has recently come to my attention that many people don’t use virtual machines for development, instead polluting their system with various dependencies and making life harder for themselves. 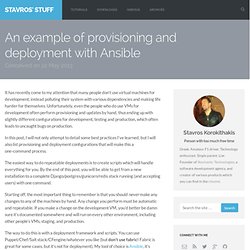 Unfortunately, even the people who do use VMs for development often perform provisioning and updates by hand, thus ending up with slightly different configurations for development, testing and production, which often leads to uncaught bugs on production. In this post, I will not only attempt to detail some best practices I’ve learned, but I will also list provisioning and deployment configurations that will make this a one-command process. The easiest way to do repeatable deployments is to create scripts which will handle everything for you. Nacholibre/pyshotx · GitHub. Tutorials: Working with webhooks - Podio. Webhooks provide a way to build event-driven apps, because you can be notified about changes in Podio. 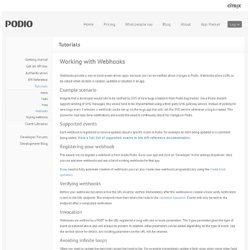 Webhooks allow a URL to be called when an item is created, updated or deleted in an app. Example scenario Imagine that a developer would like to be notified by SMS of new bugs created in their Podio bug tracker. Since Podio doesn't support sending of SMS messages, this would have to be implemented using a third-party SMS gateway service. Instead of polling for new bugs every 5 minutes, a webhook can be set up on the bugs app that will call the SMS service whenever a bug is created. Webhooks, webhook URLs and a sample implementation example of webhooks.

Introduction This article discusses about webhooks , webhook Urls and finally how a sample example where webhooks are used. 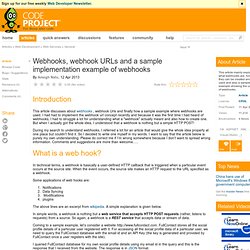 I had had to implement the webhook url concept recently and because it was the first time I had heard of webhooks, I had to struggle a lot for understanding what a "webhook" actually meant and also how to create one. But when I actually got the whole idea, I understood that a webhook is nothing but a simple HTTP POST! During my search to understand webhooks, I referred a lot for an article that would give the whole idea properly at one place but couldn't find it. API Docs. Webhooks allow you to collect information about events as they happen in near real-time. 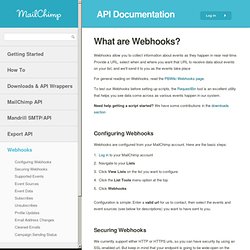 Provide a URL, select when and where you want that URL to receive data about events on your list, and we'll send it to you as the events take place For general reading on Webhooks, read the PBWiki Webhooks page. To test our Webhooks before setting up scripts, the RequestBin tool is an excellent utility that helps you see data come across as various events happen in our system. Need help getting a script started? We have some contributions in the downloads section. Email Deliverability Solution. The Heartbeat API: Getting Started. With 3.6, aka "Oscar", just released, lets take a look at some of the new features that are available to developers. 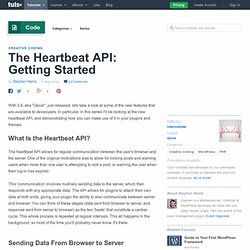 In particular, in this series I'll be looking at the new heartbeat API, and demonstrating how you can make use of it in your plugins and themes. The heartbeat API allows for regular communication between the user's browser and the server.