Executions in England from 1606. The following list is extracted from the publication 'Haydn's Dictionary of Dates' published in London in 1895. 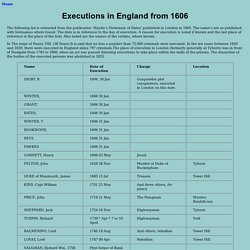 The name's are as published, with forenames where found. The date is in reference to the day of execution. A reason for execution is noted if known and the last place of reference is the place of the trial. Also noted are the names of the victims, where known. In The reign of Henry VIII. (38 Years) It is said that no less a number than 72,000 criminals were executed. From: Paul Zwierzanski. 141 North Lane, Portslade, E.Sussex, BN41 2HH. Explore Billions of Historical Records.

Bristol and Avon Family History Society. Hawkesbury Local History Society. In the winter of 1085/6, William I met with his counsellors at Gloucester and ordered that men be sent all over England ‘to each shire’, to conduct a survey to be recorded in what later becomes known as the Domesday Book. 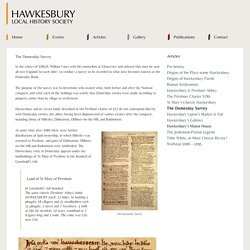 The purpose of the survey was to determine who owned what, both before and after the Norman conquest, and what each of the holdings was worth; thus Domesday entries were made according to property, rather than by village or settlement. Hawkesbury and its ‘seven lands’ described in the Pershore charter of 972 do not correspond directly with Domesday entries, the abbey having been dispossessed of various estates after the conquest, including those of Hillesley, Didmarton, Oldbury-on-the-Hill, and Badminton.

The Domesday Survey At some time after 1086 there were further distributions of land ownership, in which Hillesley was restored to Pershore, and parts of Didmarton, Oldbury-on-the-Hill and Badminton were subdivided. 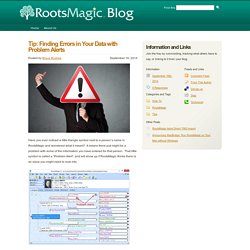 It means there just might be a problem with some of the information you have entered for that person. That little symbol is called a “Problem Alert”, and will show up if RootsMagic thinks there is an issue you might need to look into. To see what RootsMagic wants you to check out, just click on the little symbol and the problem list will open for that person. There may be just a single problem, or there may be multiple problems. In addition to displaying a list of potential problems, the problem list also gives you a number of things you can do with the highlighted problem. When you click “Problem options”, the following screen will let you choose which problems RootsMagic will look for. If you want to see Problem Alerts in action, here is a short video we put together for you. Gabriel Sainz en "Métodos" Canal (á) Parte 1 de 3.

Local Family History Societies. EBooks. Glosgen. Historypin. Between 2014 and 2018, thousands of communities are investigating and commemorating the impact of the First World War. 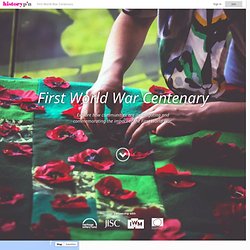 Newspapers. Railways. RootsMagic. Villages + Towns. Sassoon. The history of the workhouse by Peter Higginbotham. Tytherington Roots. Thornbury Roots - local history & genealogy of Thornbury. BGAS. Who Do You Think You Are? Story - Bring Your Family History To Life.