The Nature of Code 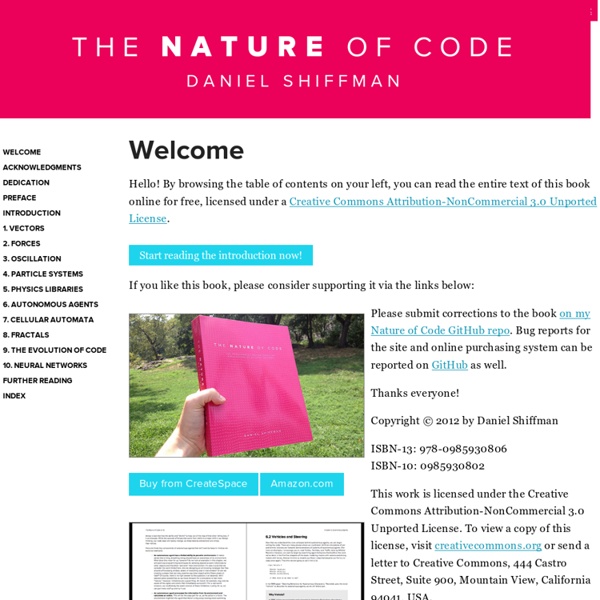 Hello! By browsing the table of contents on your left, you can read the entire text of this book online for free, licensed under a Creative Commons Attribution-NonCommercial 3.0 Unported License. Start reading the introduction now! If you like this book, please consider supporting it via the links below: Please submit corrections to the book on my Nature of Code GitHub repo. Bug reports for the site and online purchasing system can be reported on GitHub as well. Thanks everyone! Copyright © 2012 by Daniel Shiffman This work is licensed under the Creative Commons Attribution-NonCommercial 3.0 Unported License. All of the book’s source code is licensed under the GNU Lesser General Public License as published by the Free Software Foundation; either version 2.1 of the License, or (at your option) any later version. This book was generated by the Magic Book Project. Editor Shannon Fry Illustrations Zannah Marsh Cover Design David Wilson Interior Design Web Site Design Steve Klise Evan Emolo Index

Kierkegaard, D. Anthony Storm's Commentary on - Fear and Trembling Fear and Trembling: A Dialectical Lyric Frygt og Bæven: Dialectisk Lyrik Johannes de Silentio 1843 KW6, SKS4, SV3 This is a deeply personal work which exists semantically on two distinct planes. Ostensibly it is about the "teleological suspension of the ethical", that is, the suspension of the moral law for the sake of a higher law. Kierkegaard cites Genesis, where Abraham is commanded by God to kill his son Isaac. Although God must be obeyed, murder is immoral (it is not technically against the Mosaic law since it had not yet been delivered—but no matter, it is against our conscience).

Codes - GENERATIVE GESTALTUNG 2016-03-15RT @bndktgrs: 幸せなコーディング! Launched: Our #GenerativeDesign book has also a 🇯🇵 website now!👍 [Link] Cheers @BugNews! Cellular Posts Tagged ‘Cellular’ SCIN Cube Location: London Design Festival, SCIN GalleryDate: 2012Materials: 3D Printed ConcreteTools: Rhino, Grasshopper, WeaverbirdDimensions: 20cm x 20cm x 20cm Project DescriptionSCIN, a material resource center for designers and architects in London, asked a small group of emerging designers to produce a small cube that represents their approach to design, materiality, and technology for an exhibition that coincides with the London Design Festival. Our submission reflects the reoccurring presence in our work of cellular solids, a transmaterial grouping characterized by high strength to weight ratios. The cube was designed using a network of digital cellular bodies that are first relaxed to produce a more uniform field and then structurally differentiated in relation to their distance to the outside surface.

Dev Blog: List of tutorials for beginner game developers - Flash and ActionScript Here is a list of good Flash and ActionScript tutorials for game makers. If you want to learn more about how to make flash games consider reading them all. Avoider Game Really good and detailed game tutorial. Flash game creation Another good and long game tutorial. Tile Based If you are serious on making games read this one too. How to Pick the Right Programming Language Adron Hall is the lead developer of cloud solutions at New Relic. During the course of every coding project, a software developer must make dozens of decisions. Sometimes this involves solving a problem unique to a particular domain space or a particular architectural issue. Other times it’s about which language is best for a job. That is actually one of the most critical pieces of getting a project right. Too often, languages are applied to a problem space where another language would be better.

Meet the Feminist "Godless Congregation" Challenging Atheism's Bro-Culture A Carl Sagan quote featured by Harvard's Humanist Hub, a feminist-minded secular community center. Across the United States, the number of people who don’t consider themselves religious is rapidly rising—one in five Americans is now religiously unaffiliated. Within this expanding group of non-religious folks, though, there’s a clear gender gap. According to the 2012 Pew study "Nones on the Rise," while Americans who identify their religion as “nothing in particular” are rather evenly divided by gender, only 36 percent of people who identify as atheists and agnostics are women. Back in 2011, Victoria Bekiempis wrote a piece for Bitch called “The Unbelievers: New Atheism and the Old Boys Club,” which took aim at the gender imbalance in secular communities.