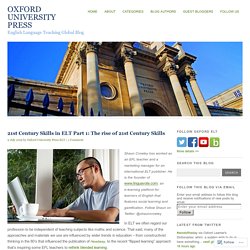 He is the founder of www.linguavote.com, an e-learning platform for learners of English that features social learning and gamification. Follow Shaun on Twitter: @shauncrowley In ELT we often regard our profession to be independent of teaching subjects like maths and science. That said, many of the approaches and materials we use are influenced by wider trends in education – from constructivist thinking in the 80’s that influenced the publication of Headway, to the recent “flipped learning” approach that’s inspiring some EFL teachers to rethink blended learning. Now let’s be honest – it’s a bit of a buzzword, with a meaning that’s open to interpretation. 21st century skills and the English language classroom. Are you teaching in a 21st century classroom? 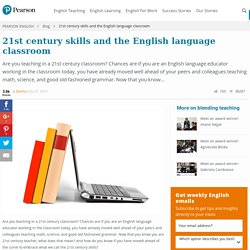 Chances are if you are an English language educator working in the classroom today, you have already moved well ahead of your peers and colleagues teaching math, science, and good old fashioned grammar. 5 tips to improve your critical thinking - Samantha Agoos. History of Critical Thinking “The intellectual roots of critical thinking are as ancient as its etymology, traceable, ultimately, to the teaching practice and vision of Socrates 2,500 years ago who discovered by a method of probing questioning that people could not rationally justify their confident claims to knowledge. 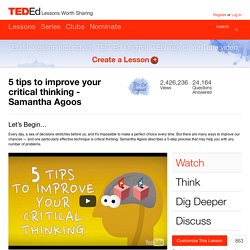 Confused meanings, inadequate evidence, or self-contradictory beliefs often lurked beneath smooth but largely empty rhetoric.” “He [Socrates] established the importance of seeking evidence, closely examining reasoning and assumptions, analyzing basic concepts, and tracing out implications not only of what is said but of what is done as well. His method of questioning is now known as "Socratic Questioning" and is the best known critical thinking teaching strategy. In his mode of questioning, Socrates highlighted the need in thinking for clarity and logical consistency.” More on critical thinking through the ages is available here. 1.

5 tips to improve your critical thinking - Samantha Agoos. To what extent does Bloom’s taxonomy actually apply to foreign language teaching and learning? Bloom’s taxonomy of higher order thinking skills has acquired a mythological status, amongst educators. 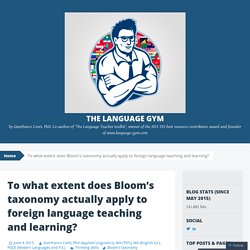 It is one of those reference frameworks that teachers adhere to with some sort of blind allegiance and which, in 25 years of teaching, I have never heard anyone question or criticize. Yet, it is far from perfect and, as I intend to argue in this article, there are serious issues undermining its validity, both with its theoretical premises and its practical implementation in MFL curriculum planning and lesson evaluation in school settings. Why should we be ‘wary’ of the Bloom taxonomy, as the ‘alarmist’ title of this article implies? Mainly because people forget or fail to consider that the Bloom Taxonomy was not meant as an evaluative tool and does not purport to measure ‘effective teaching’.

In fact, the book in which the higher order thinking skills taxonomy was published is entitled: Taxonomy of Educational Objectives: The Classification of Educational Goals. Managing the Digital Classroom. The 27 Characteristics of A 21st Century Teacher. "21st Century Educator" is probably the most popular buzzword in today's education. 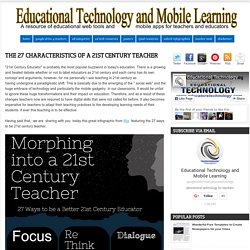 There is a growing and heated debate whether or not to label educators as 21st century and each camp has its own concept and arguments, however, for me personally I see teaching in 21st century as having undergone a paradigmatic shift. This is basically due to the emerging of the " social web" and the huge embrace of technology and particularly the mobile gadgetry in our classrooms. It would be unfair to ignore these huge transformations and their impact on education. Therefore, and as a result of these changes teachers now are required to have digital skills that were not called for before. It also becomes imperative for teachers to adapt their teaching practices to the developing learning needs of their students if ever this teaching is to be effective. 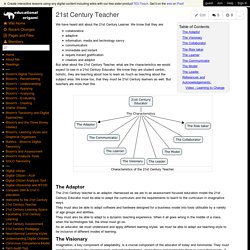 We know that they are:collaborativeadaptiveinformation, media and technology savvycommunicatorsimmediate and instantrequire instant gratificationcreators and adaptorBut what about the 21st Century Teacher, what are the characteristics we would expect to see in a 21st Century Educator. We know they are student centric, holistic, they are teaching about how to learn as much as teaching about the subject area. We know too, that they must be 21st Century learners as well. But teachers are more than this The 21st Century teacher is an adaptor. Harnessed as we are to an assessment focused education model the 21st Century Educator must be able to adapt the curriculum and the requirements to teach to the curriculum in imaginative ways. We expect our students to be life long learners.