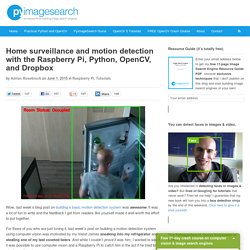 It was a lot of fun to write and the feedback I got from readers like yourself made it well worth the effort to put together. For those of you who are just tuning it, last week’s post on building a motion detection system using computer vision was motivated by my friend James sneaking into my refrigerator and stealing one of my last coveted beers. And while I couldn’t prove it was him, I wanted to see if it was possible to use computer vision and a Raspberry Pi to catch him in the act if he tried to steal one of my beers again. And as you’ll see by the end of this post, the home surveillance and motion detection system we are about to build is not only cool and simple, but it’s also quite powerful for this particular goal.

Probabilistic Programming in Python. Easiest and fastest way to host Flask Python : flask. Code Samples. A python package template. I've been sitting on this for a while, it's time to announce it as I don't know what I can improve in it. 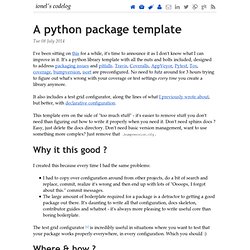 It's a python library template with all the nuts and bolts included, designed to address packaging issues and pitfalls. Travis, Coveralls, AppVeyor, Pytest, Tox, coverage, bumpversion, isort are preconfigured. No need to futz around for 3 hours trying to figure out what's wrong with your coverage or test settings every time you create a library anymore.

It also includes a test grid configurator, along the lines of what I previously wrote about, but better, with declarative configuration. What is the best practice for granting special rights to some users of a web site? : flask. How To Make a User Account System - Tutorials In Progress - webdevRefinery Forum. Dive Into HTML5. How to Track Tweets, Facebook Likes and More with Google Analytics. Don’t you wish you could track the traffic impact of Twitter, Facebook and Google+ using Google Analytics? 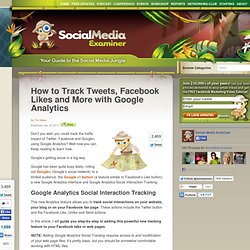 Well now you can. Keep reading to learn how. Google’s getting social in a big way. Google has been quite busy lately, rolling out Google+ (Google’s social network) to a limited audience, the Google +1 button (a feature similar to Facebook’s Like button), a new Google Analytics interface and Google Analytics Social Interaction Tracking. Google Analytics Social Interaction Tracking This new Analytics feature allows you to track social interactions on your website, your blog or on your Facebook fan page. In this article, I will guide you step-by-step in adding this powerful new tracking feature to your Facebook tabs or web pages.

Netbios Hacking. Almost half of the Internet users across the globe use ADSL routers/modems to connect to the Internet. 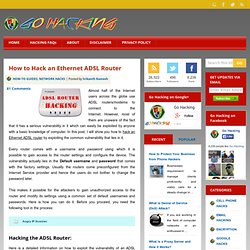 However, most of them are unaware of the fact that it has a serious vulnerability in it which can easily be exploited by anyone with a basic knowledge of computer. In this post, I will show you how to hack an Ethernet ADSL router by exploiting the common vulnerability that lies in it. Every router comes with a username and password using which it is possible to gain access to the router settings and configure the device. 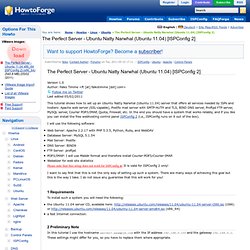 In the end you should have a system that works reliably, and if you like you can install the free webhosting control panel ISPConfig 2 (i.e., ISPConfig runs on it out of the box). I will use the following software: Web Server: Apache 2.2.17 with PHP 5.3.5, Python, Ruby, and WebDAV Database Server: MySQL 5.1.54 Mail Server: Postfix DNS Server: BIND9 FTP Server: proftpd POP3/IMAP: I will use Maildir format and therefore install Courier-POP3/Courier-IMAP. 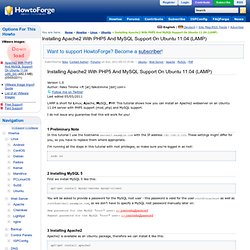 This tutorial shows how you can install an Apache2 webserver on an Ubuntu 11.04 server with PHP5 support (mod_php) and MySQL support. Setting Up A Spam-Proof Home Email Server (The Somewhat Alternate Way) (Debian Squeeze. Introduction Email spam is a huge problem. 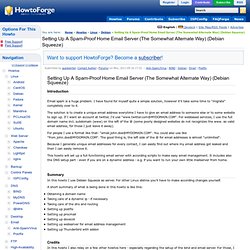 I have found for myself quite a simple solution, however it'll take some time to "migrate" completely over to it. The solution is to create a unique email address everytime I have to give an email address to someone else or to some website to sign up. If I want an account at twitter, I'd use "www.twitter.com@MYDOMAIN.COM". For webbased services, I use the full domain name incl. subdomain (www) on the left of the @ (some poorly designed websites do not recognizes the www. as valid email address, for those I just leave it away).