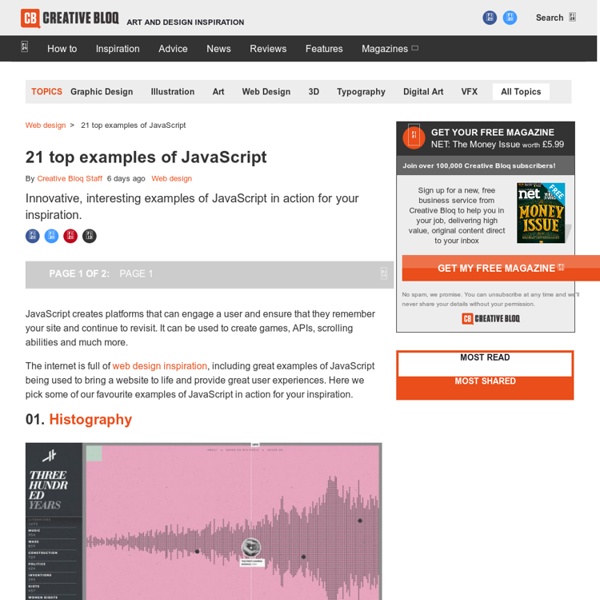 JavaScript creates platforms that can engage a user and ensure that they remember your site and continue to revisit. It can be used to create games, APIs, scrolling abilities and much more. The internet is full of web design inspiration, including great examples of JavaScript being used to bring a website to life and provide great user experiences. 01. If you've ever watched Cosmos, you may remember Carl Sagan talking about the Cosmic Calendar. 14 billion years of events is a huge dataset, and displaying it in a browser is no easy task. The son of a historian, Stauber created Histography as a student at Bezalel Academy of Arts and Design, under the guidance of Ronel Mor. The site scans and indexes events from Wikipedia, grabs the article, and pulls in a Google image and YouTube video. 02. This online portfolio showcasing the talent of Italian 3D artist Filippo Bello was conceived, designed and developed internally at Adoratorio by Enea Rossi and Alessandro Rigobello. 03. 04. 05. 06.

Nouvelle Vague by ultranoir Announcing the jQuery Plugin Registry They say good things come to those who wait, and today we’re happy to end the waiting and unveil the jQuery Plugin Registry. We’ve worked long and hard to put together a brand new site that will serve to reduce the fragmentation and distribution problems that can be obstacles for plugin developers and consumers. We’ve also put an emphasis on remedying a number of the issues that plagued the old jQuery plugins site, especially with respect to workflows for contribution of both plugins and enhancements to the repository itself. jQuery Plugin Registry: plugins.jquery.comSource/Documentation/Issues: github.com/jquery/plugins.jquery.com Downloading and Using Plugins If you’re looking to just browse and use jQuery plugins in your application or site, not a lot has changed. Registering Your Plugin Users can download your plugin however you’d like them to. That’s it — no uploading files to us, no wading through forms, and no manual updates for new versions. Contributing to the Plugin Registry

Designing for a Responsive Web The web as we know it is changing. In the past, designers and developers only had to concern themselves with one medium: the computer screen. In recent years, however, a plethora of fully internet-enabled devices with scores of different shapes and capabilities have cropped up, meaning that we now have to design our websites to fit comfortably in as many screen sizes, shapes, and resolutions as you can possibly think of. Our old fixed-width layout approach is out of the question now. What is Responsive Web Design? The idea of Responsive Web Design, a term coined by Ethan Marcotte, is that our websites should adapt their layout and design to fit any device that chooses to display it. In his book, the aptly titled "Responsive Web Design" he outlines the three parts to a responsive website: A fluid gridFluid imagesMedia queries However, it is important for you, as a designer, to understand the basic concepts of RWD so as to better design websites that will become responsive when coded.

stringify - JavaScript The JSON.stringify() method converts a JavaScript value to a JSON string, optionally replacing values if a replacer function is specified, or optionally including only the specified properties if a replacer array is specified. Syntax JSON.stringify([, [, ]]) Parameters value The value to convert to a JSON string. replacer Optional A function that alters the behavior of the stringification process, or an array of String and Number objects that serve as a whitelist for selecting the properties of the value object to be included in the JSON string. space Optional A String or Number object that's used to insert white space into the output JSON string for readability purposes. Description JSON.stringify() converts a value to JSON notation representing it: Properties of non-array objects are not guaranteed to be stringified in any particular order. The replacer parameter The replacer parameter can be either a function or an array. Example with a function Example with an array The space argument See also

Script Junkie | A Deeper Dive into jQuery Mobile There’s no doubt that mobile Web applications are here to stay. As I said at the start of the previous article in this series, talk to any C-level executive at a major company or any technology startup, and they’ll tell you about mobile apps. jQuery Mobile (jQM) provides a JavaScript framework that allows developers to easily add a mobile look and feel to their Web applications. In this article I’ll dig into some advanced features of jQuery Mobile that—with some programming—a developer can use to provide an application that looks and feels very similar to a native app running on a device. $.mobile. Configuration of jQuery Mobile jQM comes with a new object—the mobile object—which is available off the main jQuery object, $. Note: The $.mobile object is not available until after the mobileinit event is fired. In the previous article, I described examples of using a “data-”attribute on elements. For example, the $.mobile object can be extended as follows: Figure 1. activeBtnClass. text.

Responsive Web Design The English architect Christopher Wren once quipped that his chosen field “aims for Eternity,” and there’s something appealing about that formula: Unlike the web, which often feels like aiming for next week, architecture is a discipline very much defined by its permanence. Article Continues Below A building’s foundation defines its footprint, which defines its frame, which shapes the facade. Each phase of the architectural process is more immutable, more unchanging than the last. Creative decisions quite literally shape a physical space, defining the way in which people move through its confines for decades or even centuries. Working on the web, however, is a wholly different matter. But the landscape is shifting, perhaps more quickly than we might like. In recent years, I’ve been meeting with more companies that request “an iPhone website” as part of their project. A flexible foundation#section1 Let’s consider an example design. Becoming responsive#section2 responsive architecture .