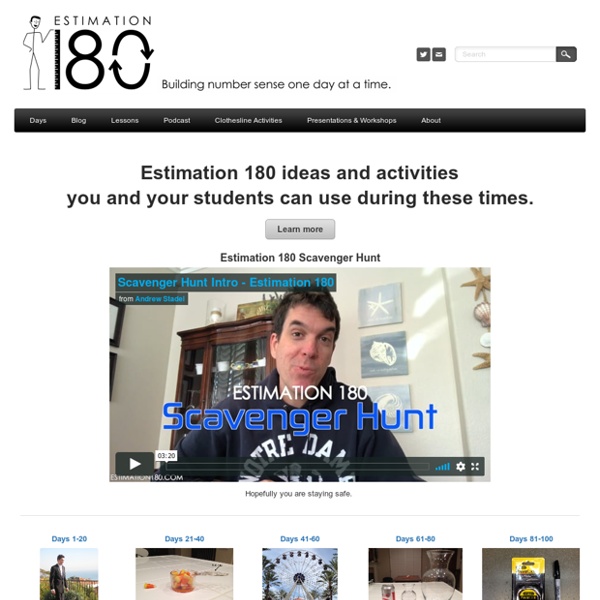 Understanding Language This eighth grade (middle school) task provides students opportunities to interpret a situation, represent the variables mathematically, select appropriate mathematical methods, interpret and evaluate the data generated, and communicate their reasoning. Students work with selected formulas to model a situation, interpret given data, make approximations, communicate their reasoning in verbal and written form, and critique solutions developed by others. This task draws on understandings of rate and proportional reasoning (a CCSS focus of grades 6 and 7), geometric measurement and volume (which begins with right rectangular prisms in grade 5, and is extended in grades 6, 7, and 8), and builds toward the high school number and quantity standard of interpreting units consistently in formulas. Making Matchsticks is part of a Formative Assessment Lesson (FAL), which can be downloaded here:

'Taught right, every maths pupil could be a Countdown winner' In 1997, James Martin, a quietly unassuming Oxford maths PhD, entered television gameshow folklore with his stunning solution to a maths problem on Countdown. The challenge: make 952 using the numbers 100, 75, 50, 25, 3 and 6. You may use the four standard operations of addition, subtraction, multiplication and division.

Mr. B's Blog: I Volunteer as Tribute: The Final HSCN The arena set, the districts formed, the Capitol ready. Sounds like the beginning of the Hunger Games, doesn't it? This was the staging for the final HSCN: The Math Hunger Games. To bring you up to speed if you are not familiar with my HSCN, I hosted evenings three times a month where I instructed parents on math and reading. This is explored more in depth in this blog post. Mathematical Beginnings Welcome to www.mathematicalbeginnings.com! This website contains a free collection of starting points for mathematical activity. They could be used with learners aged around 11 upwards as a part of normal mathematics lessons or as something ‘a little different’.

Mr Kraft's Wikispace - Mr Kraft's Three Acts This is my attempt to build on the work of Dan Meyer, probably most well known for his TED presentation. You can also check out his blog and his 101 questions website to find similarly intriguing photos/videos. I also like Andrew Stadel's work which you can find here. Click on the box to access each lesson.

NumberFix: RAFT Writing Prompts for Math Writing Across the Curriculum: R.A.F.T. Prompts for Math Class building a writing prompt that challenges students to think deeply about math Classroom writing assignments can feel very unauthentic to our students. Think about it. The 5-4-3-2-1 Challenge from Will Shortz and NPR On Sunday morning, Nancy Swank tweeted me a link to a puzzle on NPR's website. This shouldn't come as a surprise because Nancy is the entire reason why NPR spent an entire day in my classroom in 2014. I followed the link and started reading the puzzle. Within about a minute, I knew I HAD to do this puzzle with my students this week. Here's the link to the puzzle from NPR so you can check it out yourself.

Welcome to Space Math @ NASA ! On July 5, 2016 the Juno spacecraft entered orbit around the giant planet Jupiter. Here are a few resources that feature this historic event! More will follow as its exciting science data is released Juno Math: Exploring Jupiter's Polar Regions Students use simple proportions to compare the resolutions of the cameras used in NASA missions to photograph Jupiter and its Polar Regions. [Grade: 6-8 | Topics: proportions; unit conversions] (Problem and answer key). Juno Math: Exploring the Orbit of Juno Students use the Standard Formula for an ellipse to study the elliptical orbit of the Juno spacecraft.