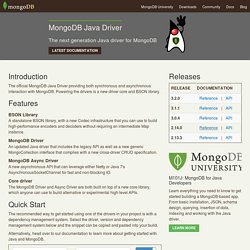 Powering the drivers is a new driver core and BSON library. Features BSON Library A standalone BSON library, with a new Codec infrastructure that you can use to build high-performance encoders and decoders without requiring an intermediate Map instance. MongoDB Driver An updated Java driver that includes the legacy API as well as a new generic MongoCollection interface that complies with a new cross-driver CRUD specification. MongoDB Async Driver A new asynchronous API that can leverage either Netty or Java 7's AsynchronousSocketChannel for fast and non-blocking IO. Core driver The MongoDB Driver and Async Driver are both built on top of a new core library, which anyone can use to build alternative or experimental high-level APIs. Quick Start The recommended way to get started using one of the drivers in your project is with a dependency management system.

Quick Tour. The following code snippets come from the QuickTour.java example code that can be found with the driver source. 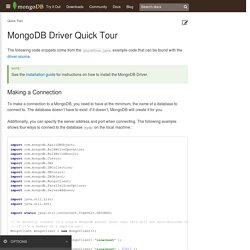 Making a Connection To make a connection to a MongoDB, you need to have at the minimum, the name of a database to connect to. The database doesn’t have to exist -if it doesn’t, MongoDB will create it for you. Additionally, you can specify the server address and port when connecting. The following example shows four ways to connect to the database mydb on the local machine : At this point, the db object will be a connection to a MongoDB server for the specified database. The MongoClient class is designed to be thread safe and shared among threads. Important When creating many MongoClient instances: All resource usage limits (max connections, etc) apply per MongoClient instanceTo dispose of an instance, make sure you call MongoClient.close() to clean up resources Authentication (Optional) MongoDB can be run in a secure mode where access to databases is controlled via authentication. 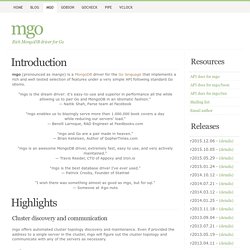 "mgo is the dream driver: it's easy-to-use and superior in performance all the while allowing us to pair Go and MongoDB in an idiomatic fashion. " — Naitik Shah, Parse team at Facebook "mgo enables us to blazingly serve more than 1.000.000 book covers a day while reducing our servers' load. " — Benoît Larroque, R&D Engineer at Feedbooks.com "mgo and Go are a pair made in heaven. " — Brian Ketelsen, Author of GopherTimes.com "mgo is an awesome MongoDB driver, extremely fast, easy to use, and very actively maintained.

" — Travis Reeder, CTO of Appoxy and Iron.io "mgo is the best database driver I've ever used. " — Patrick Crosby, Founder of StatHat "I wish there was something almost as good as mgo, but for sql. " — Someone at #go-nuts Highlights Cluster discovery and communication Failover management Mailing list. MongoDB Tools - Admin GUIs, Monitoring and Other Good Stuff.

Untitled. MongoDB does not include a GUI-style administrative interface. 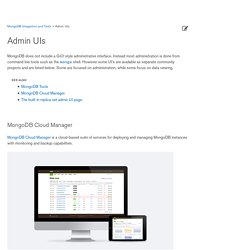 Instead most administration is done from command line tools such as the mongo shell. However some UI’s are available as separate community projects and are listed below. Some are focused on administration, while some focus on data viewing. Third-Party Open-Source Tools mongo-express mongo express is an open source web-based MongoDB administrative interface written with Node.js and express. Edda Edda is a log visualizer. HumongouS.io HumongouS.io is a web-based user interface for MongoDB. Features: Easy CRUD operationsHuman-friendlyIntegrated dashboardWorks on mobile and tabletSupports all recent browsersWorks on Windows, Linux and OSX To track progress on Twitter, follow: @humongousio. Fang of Mongo Fang of Mongo is a web-based user interface for MongoDB build with django and jquery.