Data Governance, Data Protection, Data Management, and Compliance. Cloud computing by the numbers: The rise of the private and hybrid cloud. The proliferation of cloud computing is one of the most impactful trends in the world of enterprise IT today — and the technology is ever evolving. 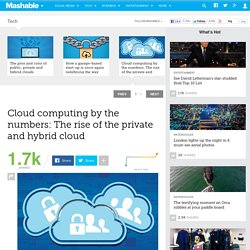 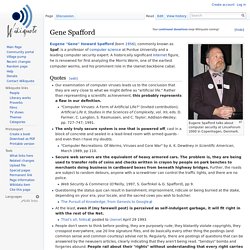 Eugene "Gene" Howard Spafford (born 1956), commonly known as Spaf, is a professor of computer science at Purdue University and a leading computer security expert. A historically significant Internet figure, he is renowned for first analyzing the Morris Worm, one of the earliest computer worms, and his prominent role in the Usenet backbone cabal. Quotes[edit] Our examination of computer viruses leads us to the conclusion that they are very close to what we might define as "artificial life. " Is it better to own or outsource your data center?

Once it was standard for organisations to own and operate their own data centers. 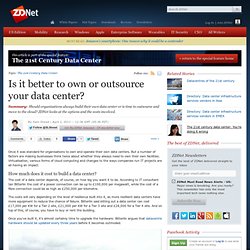 But a number of factors are making businesses think twice about whether they always need to own their own facilities. Virtualisation, various forms of cloud computing and changes to the ways companies run IT projects are all having an impact. How much does it cost to build a data center? The cost of a data center depends, of course, on how big you want it to be. According to IT consultant Ian Bitterlin the cost of a power connection can be up to £100,000 per megawatt, while the cost of a fibre connection could be as high as £250,000 per kilometre. The costs will vary depending on the level of resilience built into it, as more resillient data centers have more equipment to reduce the chance of failure. 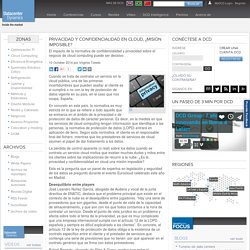 Is there a point where a private cloud is cheaper than the public cloud? Cloud computing is a trap, warns GNU founder. The concept of using web-based programs like Google's Gmail is "worse than stupidity", according to a leading advocate of free software. 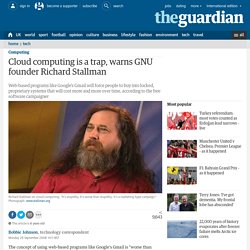 Cloud computing – where IT power is delivered over the internet as you need it, rather than drawn from a desktop computer – has gained currency in recent years. Large internet and technology companies including Google, Microsoft and Amazon are pushing forward their plans to deliver information and software over the net. But Richard Stallman, founder of the Free Software Foundation and creator of the computer operating system GNU, said that cloud computing was simply a trap aimed at forcing more people to buy into locked, proprietary systems that would cost them more and more over time. 362916-cloud-computing-expectations.jpg (JPEG Image, 1105 × 622 pixels) - Scaled (92%) When Big Companies Don't Trust Cloud Computing. Every large company I've talked to is a big believer in cloud computing. 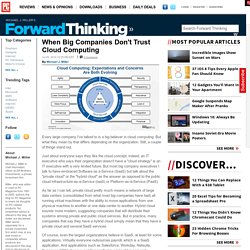 But what they mean by that differs depending on the organization. Still, a couple of things stand out. Just about everyone says they like the cloud concept; indeed, an IT executive who says their organization doesn't have a "cloud strategy" is an IT executive with a very limited future. Alternativas para construir una nube privada con nuestros datos. Pros y contras del cloud computing (II): los inconvenientes de la nube. 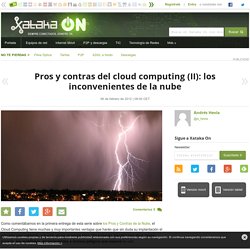 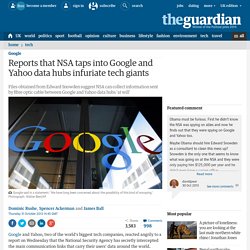 Citing documents obtained from former NSA contractor Edward Snowden and interviews with officials, the Washington Post claimed the agency could collect information "at will" from among hundreds of millions of user accounts. The documents suggest that the NSA, in partnership with its British counterpart GCHQ, is copying large amounts of data as it flows across fiber-optic cables that carry information between the worldwide data centers of the Silicon Valley giants. The intelligence activities of the NSA outside the US are subject to fewer legal constraints than its domestic actions. The story is likely to put further strain on the already difficult relations between the tech firms and Washington. Internet firms go to great lengths to protect their data.