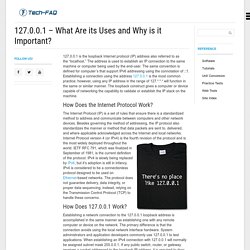 The address is used to establish an IP connection to the same machine or computer being used by the end-user. The same convention is defined for computer’s that support IPv6 addressing using the connotation of ::1. 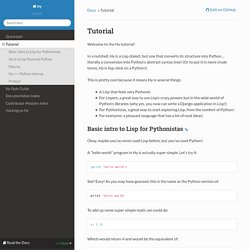 In a nutshell, Hy is a Lisp dialect, but one that converts its structure into Python ... literally a conversion into Python’s abstract syntax tree! (Or to put it in more crude terms, Hy is lisp-stick on a Python!) Free HTML Calendar Maker. The Encyclopedia Of Scams - home. Keyboard shortcuts. Tai Unicode - Tai Nation in English. FORTRAN Tutorial - Free Guide to Programming Fortran 90/95. Twitalics. Sorting Algorithm Animations. Welcome to Donger List - A Donger is a set of unicode characters assembled to form a text emoticon. Sometimes also refered to as emojicons, emoticons, kaomoji, kawaii faces, Japanese emoticons, or text faces. 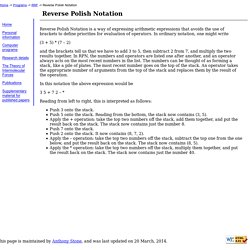 In ordinary notation, one might write and the brackets tell us that we have to add 3 to 5, then subtract 2 from 7, and multiply the two results together. In RPN, the numbers and operators are listed one after another, and an operator always acts on the most recent numbers in the list. The numbers can be thought of as forming a stack, like a pile of plates. The most recent number goes on the top of the stack. In this notation the above expression would be Reading from left to right, this is interpreted as follows: Color management. In digital imaging systems, color management is the controlled conversion between the color representations of various devices, such as image scanners, digital cameras, monitors, TV screens, film printers, computer printers, offset presses, and corresponding media. 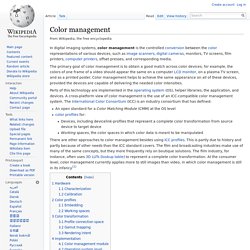 The primary goal of color management is to obtain a good match across color devices; for example, the colors of one frame of a video should appear the same on a computer LCD monitor, on a plasma TV screen, and as a printed poster. Color management helps to achieve the same appearance on all of these devices, provided the devices are capable of delivering the needed color intensities. Parts of this technology are implemented in the operating system (OS), helper libraries, the application, and devices. A cross-platform view of color management is the use of an ICC-compatible color management system. The International Color Consortium (ICC) is an industry consortium that has defined: Hardware[edit] Characterization[edit]

☆Unicode Symbol Map★ This is the Unicode Symbol Map Bookmarklet at I do not guarantee the correctness/adequateness of the script or the information given on this side and thus deny any responsibility for your use of it. 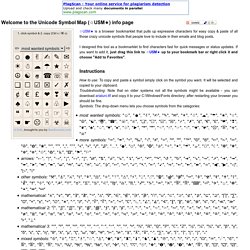 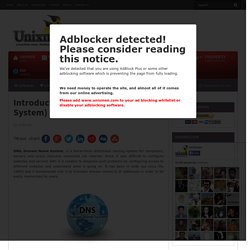 Since it was difficult to configure websites and servers DNS it is created to diagnose such problems by configuring access to different websites and understand what is going on. It has been in wide use since the 1980’s and it fundamental role is to translate domain names to IP addresses in order to be easily memorized by users. Fundamental role: It is basically used to translate computer hostnames into IP addresses. As an example, the www.example.com domain name will be translated to 93.184.216.119 (IPv4) and 2606:2800:220:6d: 26bf:1447:1097:aa7 (IPv6). Structure: DNS name structure is shaped like a tree.