A Brain Built From Atomic Switches Can Learn. Brains, beyond their signature achievements in thinking and problem solving, are paragons of energy efficiency. 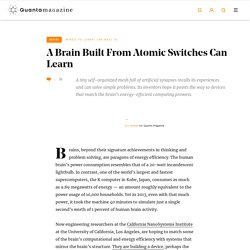 The human brain’s power consumption resembles that of a 20-watt incandescent lightbulb. In contrast, one of the world’s largest and fastest supercomputers, the K computer in Kobe, Japan, consumes as much as 9.89 megawatts of energy — an amount roughly equivalent to the power usage of 10,000 households. Yet in 2013, even with that much power, it took the machine 40 minutes to simulate just a single second’s worth of 1 percent of human brain activity. Now engineering researchers at the California NanoSystems Institute at the University of California, Los Angeles, are hoping to match some of the brain’s computational and energy efficiency with systems that mirror the brain’s structure. The Brain as Computer: Bad at Math, Good at Everything Else. 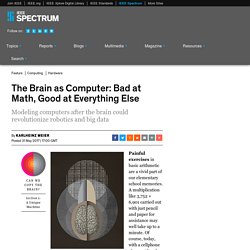 A Unique Machine Painful exercises in basic arithmetic are a vivid part of our elementary school memories. A multiplication like 3,752 × 6,901 carried out with just pencil and paper for assistance may well take up to a minute. Of course, today, with a cellphone always at hand, we can quickly check that the result of our little exercise is 25,892,552. Indeed, the processors in modern cellphones can together carry out more than 100 billion such operations per second. Machine Dreams. There is a shrine inside Hewlett-Packard’s headquarters in Palo Alto, in the heart of Silicon Valley. 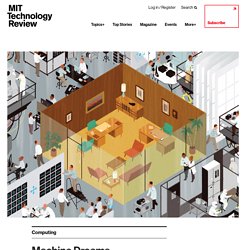 At one edge of HP’s research building, two interconnected rooms with worn midcentury furniture, vacant for decades, are carefully preserved. From these offices, William Hewlett and David Packard led HP’s engineers to invent breakthrough products, like the 40-pound, typewriter-size programmable calculator launched in 1968. This Tiny Computer has no Battery, Powered Wirelessly from Radio Waves. Why a Chip That’s Bad at Math Can Help Computers Tackle Harder Problems. DARPA funded the development of a new computer chip that’s hardwired to make simple mistakes but can help computers understand the world. 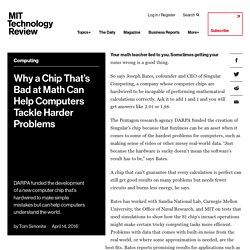 Your math teacher lied to you. Sometimes getting your sums wrong is a good thing. New Gold-Plated Silicon Array Can Transmit Data Faster Than Light — NOVA Next. IBM's 'Rodent Brain' Chip Could Make Our Phones Hyper-Smart. Keepod Stores Your Computer On A Card. Linux boot drives have been around for a long time. 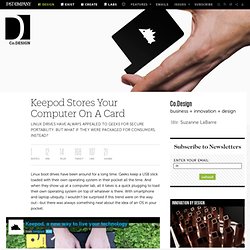 Geeks keep a USB stick loaded with their own operating system in their pocket all the time. How To Turn Your Netbook Into a Chromebook with Chromium OS. Wearable computers. Mar 01, 2009 wearable computers. 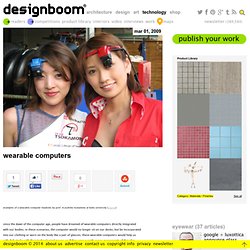 Wearable Electronic Sensors Can Now Be Printed Directly on the Skin. Taking advantage of recent advances in flexible electronics, researchers have devised a way to “print” devices directly onto the skin so people can wear them for an extended period while performing normal daily activities. 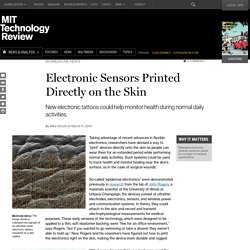 Such systems could be used to track health and monitor healing near the skin’s surface, as in the case of surgical wounds. World's Thinnest Circuits Bring Us One Step Closer To Real-Life Cyborgs. In the latest issue of Nature, Japanese and Austrian researchers are detailing an amazing discovery: the thinnest circuits ever created by humanity--one-micron-thick circuits that bend, twist, and are designed especially to be used in wearable health care products. 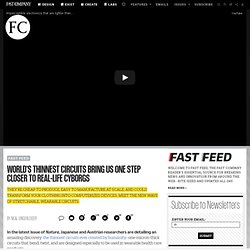 According to the Japan Science and Technology Agency, "the soft sensor system can be applied to freely curved surfaces like human skin to continuously measure body temperature, blood pressure, and many other vital signs. " Cheap to manufacture at scale, the imperceptible circuits are sweat- and water-resistant, and can curve to fit human skin. News of the circuits, which brings music to the ears of developers at dozens of companies creating wearable health care products, also fits in with a larger trend we've been seeing at Fast Company: the miniaturization of computer hardware. 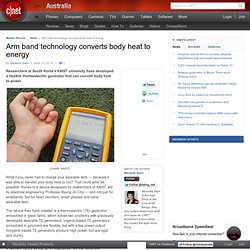 This Is How to Build an Interface for the Ultimate Smartwatch. A concept smartwatch designed by Branch Creative for WIRED’s January 2014 cover.Photo: Todd Tankersley The inauspicious beginnings of the smartwatch era have prompted intense debate about the role design could or should play in the success of the emerging product category. 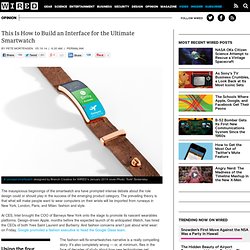 Additionally, the report features a new segmentation with 7 key sectors and examines the value chain, its strength and flexibility. With a focus on “Function with Style” the report answers who will buy these products and why, and reveals the true potential of the wearable technologies market. The report is now available for purchase here. Artificial Intelligence.

Turing's Cathedral. Intel Announces Xeon Phi Family of Co-Processors – MIC Goes Retail. As conference season is in full swing, this week’s big technical conference is the 2012 International Supercomputing Conference (ISC) taking place over in Hamburg, Germany. ISC is one of the traditional venues for major supercomputing and high performance computing (HPC) announcements and this year is no exception. Several companies will be showing off their wares, but perhaps the biggest announcement of the week is from Intel. Freescale's Insanely Tiny ARM Chip Will Put the Internet of Things Inside Your Body. Intel's Tiny Wi-Fi Chip Could Have a Big Impact. This month, Intel unveiled a Wi-Fi radio almost completely made of the same sort of transistors that go into one of its microprocessors. Talk to Me, One Machine Said to the Other. Creating Indestructible Self-Healing Circuits. 3D Microchip Moves Data In All Directions. January 31, 2013.

Advanced biological computer developed. First light-bending calculator designed with metamaterials - physics-math - 09 January 2014. Exotic materials that bend light in extreme ways could be used to perform complex mathematical operations, creating a new kind of analogue computer. Apple and Facebook Flash Forward to Computer Memory of the Future. Denser, Faster Memory Challenges Both DRAM and Flash. A new type of memory chip that a startup company has just begun to test could give future smartphones and other computing devices both a speed and storage boost. Intel's new storage chip is 1,000 times faster than flash memory. HP Will Release a “Revolutionary” New Operating System in 2015.

Hewlett-Packard will take a big step toward shaking up its own troubled business and the entire computing industry next year when it releases an operating system for an exotic new computer. Jeff Hawkins: How brain science will change computing.