Google's Got a Talking Shoe Because Wearable Computing, Or Something. THIS IS THE FUTURE: Wearable Computers In Movies Reveal Reality In 2020. When wearable computing meets the Pilates shirt. SEATTLE -- Technology giants such as Google and apparel makers such as Nike are pouring millions into wearable computing, betting that it's one of the next untapped frontiers in consumer electronics. 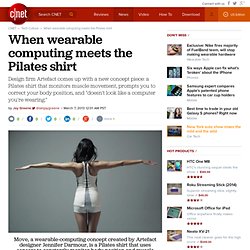 Runners slip sensors into their shoes to track how far they've gone. Insomniacs wear wristbands to monitor their sleep habits. Skiers don goggles with heads-up displays to see how fast they're moving. But wearable computing remains a niche business. Even as the cost and size of the sensors the devices use has dropped, and the ability to transmit the data those sensors collect to smartphones has become a snap, most gadgets are kludgy. Jennifer Darmour, a user experience designer for the Seattle design firm Artefact, wants to fix that. 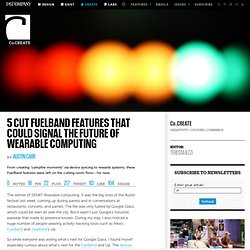 Wearable computing. It was the big story of the Austin festival last week, coming up during panels and in conversations at restaurants, concerts, and parties. The fire was only fueled by Google Glass, which could be seen all over the city. But it wasn’t just Google’s futuristic eyewear that made its presence known. During my stay, I also noticed a huge number of people wearing activity-tracking tools such as Nike’s FuelBand and Jawbone’s Up. So while everyone was asking what’s next for Google Glass, I found myself especially curious about what’s next for the FuelBand and Up. Form Factor The FuelBand is a sleek electronic bracelet that clasps to your wrist, and with the click of its only button, it slides information across the band: calories burned, steps taken, and so forth. Indeed, there were hundreds of prototypes created throughout the process, with concepts that even fit over your leg or upper arm. Campfire Connection. 2013 — The Dawn Of Wearable Computing? 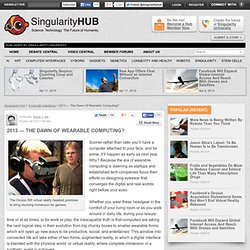 Sooner rather than later you’ll have a computer attached to your face, and for some, it’ll happen as early as next year. Why? Because the era of wearable computing is dawning as startups and established tech companies focus their efforts on designing eyewear that converges the digital and real worlds right before your eyes. Whether you wear these headgear in the comfort of your living room or as you walk around in daily life, during your leisure time or at all times, or for work or play, the inescapable truth is that computers are taking the next logical step in their evolution from big chunky boxes to smaller wearable forms, which will open up new ways to be productive, social, and entertained.

Perpetually connected: Are wearable computers and bio-implants the future of mobile? In today’s connected world, you’d be hard pressed to find a population (disregarding technophobes and lost tribes) who actively shun activities that are digitally mediated. 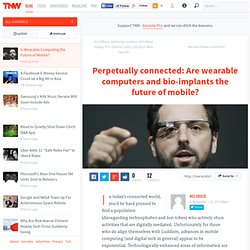 Unfortunately for those who do align themselves with Luddism, advances in mobile computing (and digital tech in general) appear to be exponential. Technologically-enhanced areas of information are all around us, from our PCs to smart gadgets made pocket-portable. In the digital sci-fi series “H+”, wireless implants are regularly injected into a population who seem comfortable with the idea of invasively combining biology and technology. The characters of H+ willingly insert the equivalent of our current mobile device tech into their bodies, transforming them into mobile connected entities. Wearable computers: The next generation. Wearable computing: why it's about much more than an Apple iWatch or Google Glasses. Our augmented selves: The promise of wearable computing.

By Donald Melanson and Michael Gorman It's been an interesting year for Google's most famous side project. 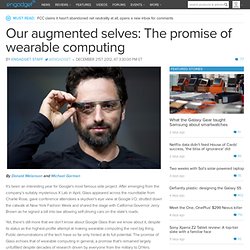 After emerging from the company's suitably mysterious X Lab in April, Glass appeared across the roundtable from Charlie Rose, gave conference attendees a skydiver's eye view at Google I/O, strutted down the catwalk at New York Fashion Week and shared the stage with California Governor Jerry Brown as he signed a bill into law allowing self-driving cars on the state's roads. Wearable computer. The WIMM One, an Android powered wearable computer. 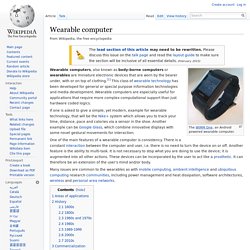 Wearable computers, also known as body-borne computers or wearables are miniature electronic devices that are worn by the bearer under, with or on top of clothing.[1] This class of wearable technology has been developed for general or special purpose information technologies and media development. Wearable computers are especially useful for applications that require more complex computational support than just hardware coded logics. If one is asked to give a simple, yet modern, example for wearable technology, that will be the Nike+ system which allows you to track your time, distance, pace and calories via a sensor in the shoe. Another example can be Google Glass, which combine innovative displays with some novel gestural movements for interaction. One of the main features of a wearable computer is consistency. Areas of applications[edit] Wearable computer items have been initially developed for and applied with e.g. History[edit] Wearable Computing at the MIT Media Lab. 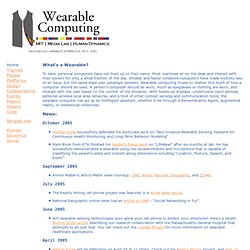 To date, personal computers have not lived up to their name. Most machines sit on the desk and interact with their owners for only a small fraction of the day. Smaller and faster notebook computers have made mobility less of an issue, but the same staid user paradigm persists. Wearable Computing.