Diane's PS3 Hack Page. Back to Diane's HomePage by Diane Neisius aka ~medusa Last update: April 26, 2010 Content Important Note Debian Linux on the PS3 Building and Testing the Xorhack Module Examining LV1 Syscalls without exploit Thoughts about Cell and PS3 Links Important Note If you're looking for warez or "isoldr" for you means "iso image loader for copied game DVDs" I recommend you follow this link. 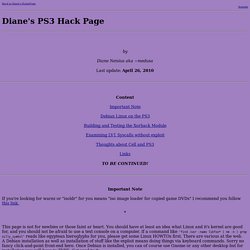 This page is not for newbies or those faint ar heart. Wanna mail me? Netbooting with petitboot. I've been working on petitboot's netboot code recently. 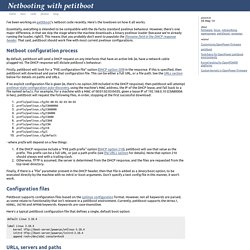 Here's the lowdown on how it all works. Essentially, everything is intended to be compatible with the de-facto standard pxelinux behaviour. However, there's one major difference, in that we skip the stage where the machine downloads a binary pxelinux loader (because we're already running the loader, right?). This means that you probably don't want to populate the filename field in the DHCP response header. That said, petitboot should work fine with most current pxelinux configurations. Netboot configuration process By default, petitboot will send a DHCP request on any interfaces that have an active link (ie, have a network cable plugged-in). Firstly, petitboot will look for a "PXE configuration file" option (DHCP option 209) in the response. . - where prefix will depend on a few things: If the DHCP response include a "PXE path prefix" option (DHCP option 210), petitboot will use that value as the prefix.

Configuration files. Petitboot. Petitboot is a graphical bootloader for the PlayStation 3. 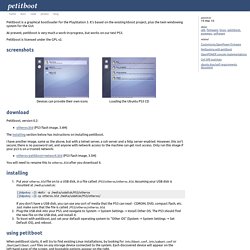 It's based on the existing kboot project, plus the twin windowing system for the GUI. At present, petitboot is very much a work-in-progress, but works on our test PS3. Petitboot is licensed under the GPL v2. screenshots download Petitboot, version 0.2: Index of /pub/linux/kernel/people/geoff/cell/ps3-howto. Ps3-debian-install-howto. Index of /cdimage/daily-builds/daily/arch-latest/powerpc/iso-cd. Playstation 3(PS3) Debian squeeze Tutorial. [Tutorial] How to Configure & Install the Debian GNU/Linux squeeze on Playstation3 (PS3) Preface: the Playstation3 is a kick ass machine/computer! 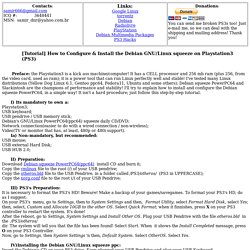 It has a CELL processor and 256 mb ram (plus 256, from the video card, used as ram); it is a power tool that can run Linux perfectly well and stable! I've tested many Linux distributions (Yellow Dog Linux 6.1, Gentoo ppc64, Fedora11, Ubuntu and some others); Debian squeeze PowerPC64 and Slackintosh are the champions of performance and stability! I'll try to explain how to install and configure the Debian squeeze PowerPC64, in a simple way! It isn't a hard procedure; just follow this step-by-step tutorial. I) Its mandatory to own a: Playstation3;USB keyboard;USB pendrive / USB memory stick;Debian's GNU/Linux PowerPC64(ppc64) squeeze daily CD/DVD;Network connection(easier to do with a wired connection / non-wireless); Video(TV or monitor that has, at least, 480p or 480i support).

Debian LiveCD - PS3 Developer wiki. Sometimes we need to boot Linux without HDD e.g. if you want to experiment with HDD encryption, enable/disable it without causing damage to your data. 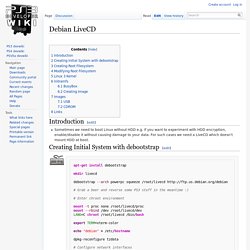 For such cases we need a LiveCD which doesn't mount HDD at boot. cd /root/livecd mksquashfs * .. /root.sfs cd /root unsquashfs root.sfs cd squashfs-root # Make your changes mksquashfs * .. /root-changed.sfs We need a Linux 3 kernel with overlayfs support so we could create a tmpfs over our read-only base filesystem. See my GIT repos: See my GIT repo: BusyBox[edit] We need a couple of user-space applications to mount filesystems, load kernel modules and so on. Tar xvjf busybox-1.20.1.tar.bz2 cd busybox-1.20.1 make menuconfig make Creating Image[edit] Petitboot. Installing Ubuntu on PS3 - PSHomebrew. Note: Linux support on PS3 (that does not use OtherOS) is experimental. 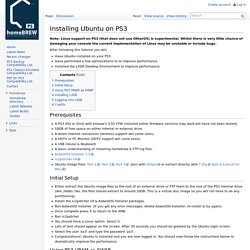 Whilst there is very little chance of damaging your console the current implementation of Linux may be unstable or include bugs. After following this tutorial you will: Have Ubuntu installed on your PS3. Have performed a few optimizations to to improve performance. Installed the LXDE Desktop Environment to improve performance. Prerequisites A PS3 (Fat or Slim) with kmeaw's 3.55 CFW installed (other firmware versions may work but have not been tested). 10GB of free space on either internal or external drive.

Initial Setup Either extract the Ubuntu image files to the root of an external drive or FTP them to the root of the PS3 internal drive (dev_hdd0) (Yes, the files should extract to around 10GB. Using PS3 VRAM as SWAP This will allow you to use the PS3 vram as a swap partition. Open terminal (it is the middle icon on the bar at top of the screen). Open up terminal again. Ps3vram Save the file and close gedit.