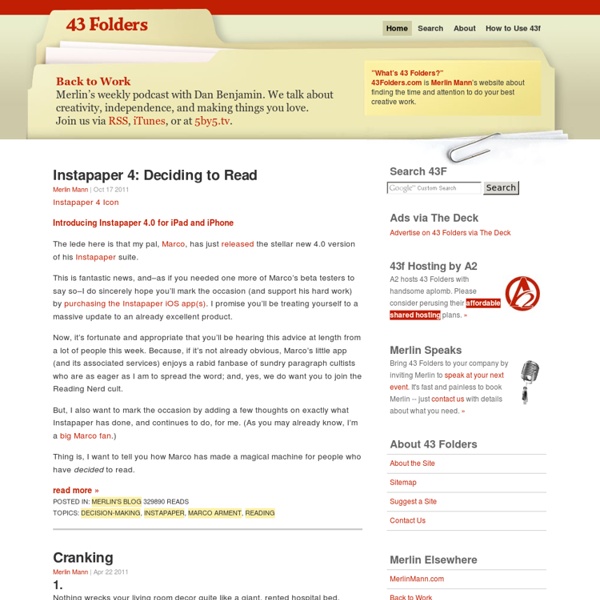 Top 10 Productivity Basics Explained These are some things that I've found work for me: Dual screens. Some may view having dual monitors as a luxury, or simply just not necessary, but let me tell you, it makes a huge productivity boost. Put all your non-mission critical stuff on one side (the left for me), such as iTunes, chat boxes, etc,... stuff you tend to keep open and interact with frequently but isn't the core of your work. PERMA Model - Career Development from MindTools Bringing Well-Being and Happiness to Your Life Put yourself on the road to happiness. © iStockphoto/silberkorn

The Best Sites To Practice Speaking English This was one of the trickiest “The Best…” list for me to compile. As I was going through my favorites, and all of the great suggestions others contributed, I concluded that it might work best to really create two lists. The first list — this one — will highlight sites that actually have students recording their own voices in a number of different ways and post their speaking assignments online. The second list, which I’ll publish later this month and will include a number of the sites that readers suggested, will focus on sites where students have to listen to spoken examples for developing better pronunciation skills. That next list will be called “The Best Sites For Learning English Pronunciation.”

Netflix What is a cookie? A cookie is a block of text that a website sends to your Internet browser (such as Internet Explorer, Safari or Firefox). To start your free trial, you need to turn on cookies for your browser. To turn on the cookies for your internet browser, we suggest you follow the steps in your browser's help section, options or preferences selections now.

13 Evidence-Based Medicinal Properties of Coconut Oil Coconut oil has a tremendous amount of lauric acid more than any other common source and the possible positive effects have been listed in the article. However, Lauric acid is a strong inhibitor of 5 alpha reductase (5AR) which converts testosterone to DHT (the stronger androgen of the two). Chronic mega dosing of coconut oil in the long run may lead to low enough levels of DHT to cause lowered libido, depression erectile dysfunction and other issues related to lower androgen. research below will show the effects of fatty acids like lauric acid on 5AR. I personally have experienced loss of libido and erectile dysfunction from the use of coconut oil for the full year that I used it religiously. I used it in my skin in cooking or mixed in smoothies as well as used coconut mana. I never made the connection and after a full body massage with coconut oil I could not "keep it up".

Just The Right Things My Favorite! I love making lists. I am a master list maker. There is something about writing down the needed groceries, errands and phone calls for each day that somehow aligns my thoughts and allows me to at least start the morning feeling organized. Over the years, I’ve used various notebooks and pads to put my lists on – some specialized, but often a plain old lined pad did the job. How to Do What You Love January 2006 To do something well you have to like it. That idea is not exactly novel. We've got it down to four words: "Do what you love." But it's not enough just to tell people that. Notable Quotes Notable Quotes "As a mentor, I cook with student & see a zillion benefits. But we "measure" flour, not things that go bump in PR fog" —Susan Ohanian, Twitter, Jan. 1, 2016 "There is a monotony about the injustices suffered by the poor that perhaps accounts for the lack of interest the rest of society shows in them. Everything seems to go wrong with them.

Are the robots about to rise? Google's new director of engineering thinks so… It's hard to know where to start with Ray Kurzweil. With the fact that he takes 150 pills a day and is intravenously injected on a weekly basis with a dizzying list of vitamins, dietary supplements, and substances that sound about as scientifically effective as face cream: coenzyme Q10, phosphatidycholine, glutathione? With the fact that he believes that he has a good chance of living for ever? He just has to stay alive "long enough" to be around for when the great life-extending technologies kick in (he's 66 and he believes that "some of the baby-boomers will make it through"). Or with the fact that he's predicted that in 15 years' time, computers are going to trump people. That they will be smarter than we are.