Twenty Five Interesting Ways To Use Twitter in the Classroom 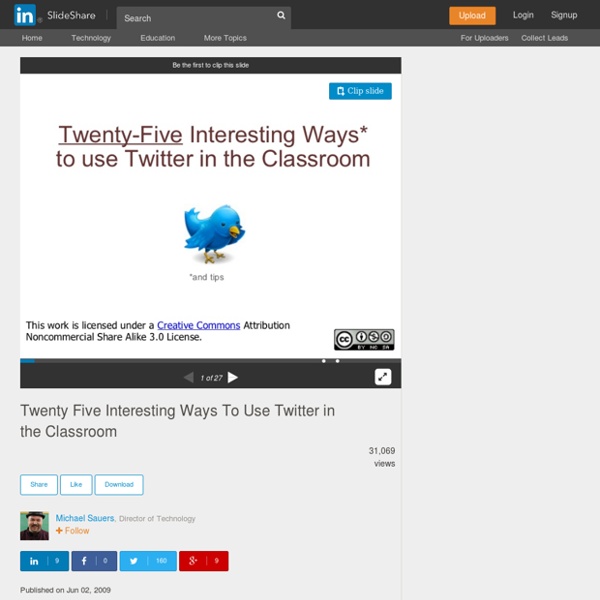 25 Ways To Use Twitter In The Classroom, By Degree Of Difficulty How Can We Stop Cheating In Online Courses? 6.11K Views 0 Likes While clearly not every student is trying hard to take the slacker route, it's worth noting that picking out the students trying to take this route gets a little more complicated when you move from taking classes in person to taking classes online. 5 Ways To Have A High-Tech Classroom With What You Already Have 11.45K Views 1 Likes There are a host of ways to use the technology you already have at your fingertips to create a Classroom 2.0. How Common Core Standards Mesh With Education Technology

Historical Tweets 100 Twitter Tips For Teachers Twitter may have started off as a fun social media site for keeping up with friends and sharing updates about daily life, but it’s become much more than that for many users over the past few years as the site has evolved and grown. These days, Twitter is a powerhouse for marketing, communication, business, and even education, letting people from around the world work together, share ideas, and gain exposure. It has become a staple at many online colleges and campuses as well, leaving many academics wondering just how and if they should be using Twitter both in the classroom and in their professional lives. You have to start somewhere and these tips will help ensure that your first foray in Twitter is a great experience. Organize your Twitter. The Internet may be a virtual Wild West but there are some unspoken rules of engagement you should know before adding your two cents into the mix. Keep private conversations private. They don’t call it a social network just for fun. Ask questions.

Quick Screen Share The Complete Guide To Twitter Hashtags In Education What is a hashtag? A word or phrase preceded by a “#.” How do hashtags work? Twitter can be a busy place with lots of tweets–and thus lots of “noise.” A #hashtag is a way to aggregate tweets that are appended with a hashtag. Who can use hashtags? Anyone. What else do I need to know? Don’t hashtag spam–if your tweet doesn’t add to that hashtag’s topic, discussion, or user base, don’t add the hashtag.Use more than one hashtag if it applies to more than one topic, but choose wisely. Meeting Times Many of the hashtags have “meeting times” where educators agree to “meet and tweet”–that is, send out messages on a topic at a certain time on a certain day. If you do participate at the agreed upon time, you’ll see the tweets stream in live and participate in said conversation (via twitter) in what is nearly real-time. Note, this list of hashtags will be updated periodically, including reorganization, functional linking on all hashtags, and the addition of meeting times and focus areas. Popular Hashtags

Super Teacher Tools It’s Official: Using Twitter Makes Students More Engaged Further affirming what you probably already know, Twitter is evidently one of the best tools for learning and becoming an engaged student. We’ve covered the benefits of the social network ad nauseum for teachers and administrators over the past few years … but a new study solidifies the worth of Twitter for students. Assistant Professor of Education at Michigan State University, Christine Greenhow, conducted a study titled “ Twitteracy: Tweeting is a New Literary Practice. ” In it, she found that college students who tweet as part of their instruction are more engaged with the course content, the teacher, other students, and they have higher grades. “Tweeting can be thought of as a new literary practice,” said Greenhow, who also studies the growing use of social media among high-schoolers.

Over 100 ideas for using Twitter in the Classroom This handful of resources provide about 100 different ideas for, and examples of, using Twitter in the classroom. It’s been almost 8 months since I published the post, “6 Examples of Using Twitter in the Classroom”, about uses of the popular micro-blogging tool in the instructional setting. This post generated a lot of traffic, and continues to attract hundreds of viewers every week. Since that brief posting, I’ve come across a lot of articles containing examples and suggestions for using Twitter in instructional applications. I’ve combed through many of these and tried to boil down the redundancies to create a rich set of idea-laden resources. I also want to mention these 100 Serious Twitter Tips for Academics, which are worth reviewing to learn more and plan your approach to using Twitter in (and out of) the classroom. Here are the original “6 Examples” from last June’s post: About Kelly Walsh Print This Post

The Teacher’s Quick Guide To Educational Twitter Hashtags The Teacher’s Quick Guide To Educational Twitter Hashtags Added by Jeff Dunn on 2012-10-18 I heart Twitter. If you haven’t yet, follow @edudemic to keep up with what we’re doing, working on, and seeing (like last night’s tech event with GDGT in downtown Boston!). Twitter has become a massive hit in education and it’s too big to ignore. So that’s why we helped assemble the 2012 A-Z Guide To Twitter Hashtags . But that’s a very lengthy list. Want to download this graphic as a PDF? Category: Featured Tags: #edchat , guide , hashtags , infographic , resource , twitter , visualization You may also like How Teachers Are Hacking Their Own Digital Textbooks Added by Anthony DiLaura 5 days ago 17.23K Views 9 Comments 0 Likes A group of teachers have started to disrupt their own textbook options by starting up an iBooks Author Hackathon. 5 Free Apps For Classrooms With A Single iPad Added by Monica Burns 1 month ago 24.65K Views 1 Comments 0 Likes 30 Young Leaders Worth Following On Twitter 2 Comments

Teachers Roadmap to The Use of Twitter in Education Twitter is a social network of huge importance for us in education. We have posted several articles about it here in Educational Technology and Mobile Learning and there is even a separate section where you can access all the educational tools you might need to effectively leverage Twitter in your teaching and learning.

What Teachers Need to Know about Hashtags One of the secrets behind the power of Twitter as a social media platform is hashtags. This is a distinctive feature not found in any other social networking site. If you have been following the recent American presidential campaigns you would have noticed how both of the candidates took advantage of hashtags to reach wider audiences and get their messages across . As educators and teachers , hashtags can be of great help to us in both our teaching and professional growth as life long learners. Today we are sharing with you a great infographic created by Taylor and that sheds more light on this Twitter phenomenon .

Educators: Embrace Social Media What is up with teacher development and the fear of social media? So many educators are soaring into the next advent of learning, while others continue to lecture and talk at the kids, avoiding the digital tools that are so readily available. Yesterday, in a passing conversation discussing sharing of great resources, I asked a colleague if they knew what a PLN is? ”Huh?” she said. My world has become immersed in Twitter; I find it to be one of the single most important tools in my own daily professional development. I’d like to mention some of my educationally revered friends and give them a little plug since they have helped me grow. Now, don’t get me wrong… my friends on Twitter are more like colleagues. 25 Ways To Get The Most Out Of Twitter by Jeff Dunn (just posted yesterday so we must have had some mental telepathy going on.) the founder of Edudemic, states that, Twitter may very well be the single most important tool for teachers right now. Here’s what I think:

9 Simple Tips For Connecting With Your Students On Twitter Five-Minute Film Festival: Twitter in Education I think it's fair to say that Twitter can no longer be dismissed as a trivial passing fad. Though I had dabbled with a personal account, my entire opinion changed when I started my @VideoAmy account and dove in to the conversations educators were engaged in. While some people certainly do tweet about what they're having for breakfast, teachers, administrators, and educational organizations use Twitter in a whole different way -- making smart use of those 140 characters to share resources, wisdom, and inspiration. With the wealth of information out there, you have to cut through the noise a little to figure out how it will work best for you. PLN-building?