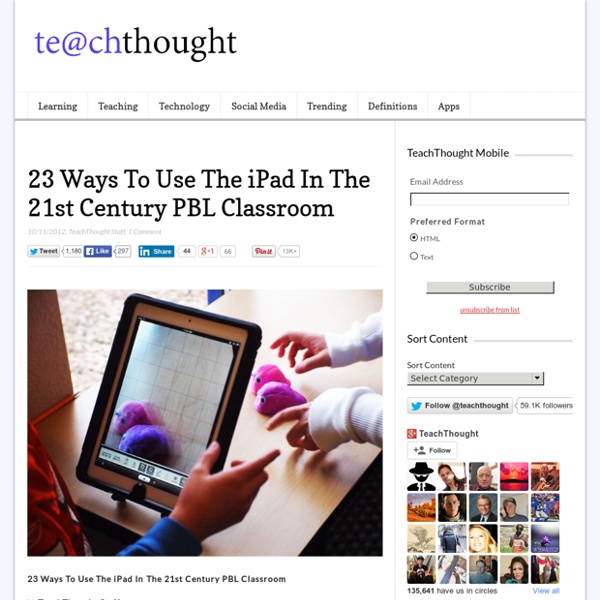 23 Ways To Use The iPad In The 21st Century PBL Classroom by TeachThought Staff The iPad is not magic, and as many educators have found integrating them meaningfully is by no means a just-add-water proposition. The same applies to Project-Based Learning. Project-Based Learning is a method of giving learners access to curriculum in authentic ways that promote collaboration, design, imagination, and innovation while also allowing for more natural integration of digital and social media. Below we’ve offered 23 ways that the iPad can be used in your classroom. Note that the visual is also arranged in a kind of visual spectrum, as our past visuals have been.

Tons of Classroom Examples Using Augmented Reality with @Aurasma - A Complete How-To Guide! How to Use Augmented Reality in Your Classroomthis post is read best via a desktop due to the embedded video content Augmented reality allows someone to add another layer to an existing image. For example, imagine holding your phone over a poster on the wall as if you were going to take a photo of that poster, and then instantly a video starts playing to offer you additional information about that particular poster. Pretty cool, right? The first time it happens, it seems like magic. 12 Characteristics Of An iPad-Ready Classroom - Implementing iPads isn’t exactly a just-add-water proposition. While they’re wondrous little devices capable of enchanting learners for hours, to get the learning results you’re likely after will take planning, design, and reflection. It can help to start out by asking yourself some important questions, such as “What can the iPad do that is not possible without it? Put another way, what problems does the iPad solve?”

iPad in the Classroom – Can we make it simpler? With many educational institutions choosing to use tablets for learning, it can be quite intimidating for teachers when faced with so many applications. The diagram below serves to illustrate that less than 20 core apps can play a significant part in the learning process and hopefully temper any trepidation. (with thanks to Greg Hughes @deepexperience1 for his ideas and input) The apps indicated serve to enhance or modify existing practice with scope to be transformational. The extent to which the learning environment can be changed is up to the educator and students. Twitter and Skype are part of many students’ lives, with immediate contact and communication a must.

Getting Emotional With… Hartmut Esslinger Professor Hartmut Esslinger is founder and co-CEO of frog design inc. He studied Industrial Design at the College of DesignGermany and received a Doctor honoris causa in Fine Arts from Parson School of Design in New York. He helped to establish brand-building design excellence with global companies such as Sony, Louis Vuitton, Apple Computer, Lufthansa, Motorola, Microsoft, SAP and Disney. How to Save Web Pages as PDF Files on the iPad & iPhone One little feature that iOS really needs is the ability to natively “print to PDF” directly on the iPad and iPhone, a popular trick on the Mac and in the PC world that allows you to digitally print anything and, in this case, save the contents of any web document or web page as a self-contained PDF document, allowing it to be read later, printed, or used for whatever other purpose. Since this great feature isn’t around on the iPhone and iPad at the moment, we can use a nice bookmarklet trick combined with a free third party web service to be able to add a “Save as PDF” option to Safari in iOS, which allows you to ‘print’ or convert any web page to a PDF file that is then accessible to apps like iBooks. Let’s walk through the process of setting this up:

6 Great Tips to Speed up Your Slow iPad iPad , this beautiful gadget that shine at your face anytime you hit that home button, is like all the other electronic gadgets, if not properly tended to it will relegate to a mere tool to use to check your mail and notes.The power of iPad lies in its portable computing capacities which are maintained and managed by its CPU. There are several important things that are very simple and that can help users preserve the life and speed of their iPad and enhance its performance yet many people ignore them. If you think your iPad is not performing as potently as it used to be when you first got it then consider the tips below. Below is a set of tips I collected from different sources online on how to speed up you iPad.

Delft Institute of Positive Design How does design mediate, facilitate, or foster user well-being? What are the universal principles of human experience? If you find yourself asking these questions, then this guide is for you. The Positive Design Reference Guide focuses on the why, what and how of human experience – both in general, and in relation to design for well-being. The guide provides you with a quick entry point into the variety of theories that we believe can be relevant for well-being-driven design. It comprises 29 models, theories and frameworks, separated into two sections. iGeneric: how can teachers incorporate iPad in all subject areas? A group of science teachers were sitting around on the staff room table. They were having a faculty meeting. One of them said, “I found this great app about biological cells! We can use this to teach the unit about cells!”. Another one responded by saying “This app I stumbled upon yesterday is amazing for teaching about the periodic table!”. The conversation went on for quite some time, only to end with one of them saying “there aren’t that many apps that can be used to teach Science”.

How To Quickly Rip A CD Onto Your iPad/iPhone In Ten Minutes Without iTunes I used to have a ton of CDs. I spent a fortune back over ten years ago collecting them. Now they are all sitting in boxes in my garage. Literally. I almost NEVER use CDs anymore.