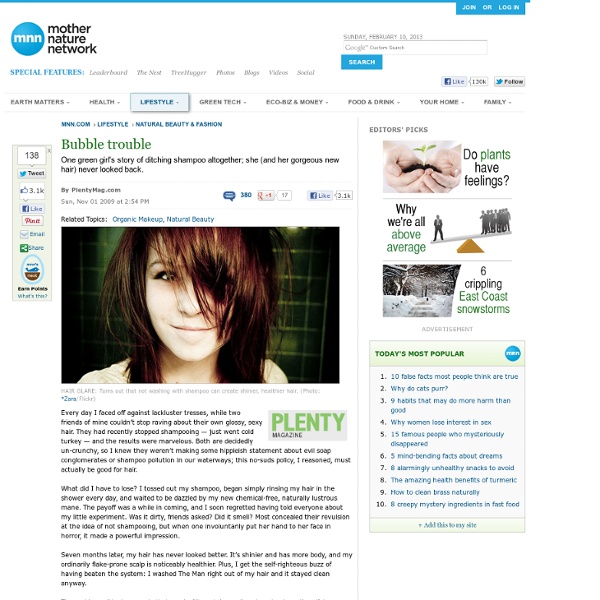 Every day I faced off against lackluster tresses, while two friends of mine couldn’t stop raving about their own glossy, sexy hair. They had recently stopped shampooing — just went cold turkey — and the results were marvelous. Both are decidedly un-crunchy, so I knew they weren’t making some hippieish statement about evil soap conglomerates or shampoo pollution in our waterways; this no-suds policy, I reasoned, must actually be good for hair. What did I have to lose? I tossed out my shampoo, began simply rinsing my hair in the shower every day, and waited to be dazzled by my new chemical-free, naturally lustrous mane. The payoff was a while in coming, and I soon regretted having told everyone about my little experiment. Seven months later, my hair has never looked better. The problem with shampoo is that most of it contains sodium lauryl or laureth sulfate as a foaming agent. Admittedly, when I first got off shampoo there was a funk factor. And so here I am. DIY Beauty

How to Go No Poo To go No Poo is to stop using shampoo. Why would you want to do this? 1. Shampoo is expensive.2. DIY Crochet Rug With Yarn & Old T-Shirts This Crochet rugs are made by Olga at olinohobby.com All you need is yarn, old T-shirts & crochet hook. Now the images will guide you trough the process. And that is it simple but really nice! banksy versus bristol museum a few years ago i attended an uh-mazing banksy exhibition in downtown los angeles and have been eagerly awaiting the elusive graffiti artist's return. alas, mr. bansky choose instead to set up his latest wares in new york and bristol. on june 13th, banksy's largest exhibition entitled "banksy versus bristol museum" was unveiled at the bristol city museum. it features more than 100 of banksy's works mixed amongst the museum's permanent collection (including a mouse with a backpack tucked inside of a natural history case. someone, please send me a picture! check out the mouse here. thanks, matt, more the picture!).

How-To: The Cascade/Waterfall Braid The waterfall braid also known as the cascade braid recently exploded as the new "trend braid" of the season. The waterfall effect looks cool and complex, but it's easier to style than you think. Give this beautiful braid a try when Beautylish takes you through the how-to! Section Off The waterfall braid works best on straight or loose waves. Brush out all the knots with a wide tooth comb. Les Misérables (musical) Les Misérables (/leɪ ˈmɪzərɑːb/ or /leɪ ˌmɪzəˈrɑːb/; French pronunciation: ​[le mizeˈʁabl]), colloquially known as Les Mis or Les Miz /leɪ ˈmɪz/) is a sung-through musical based on the novel of the same name by French poet and novelist Victor Hugo. It has music by Claude-Michel Schönberg, original French lyrics by Alain Boublil and Jean-Marc Natel, with an English-language libretto by Herbert Kretzmer. Set in early 19th-century France, it is the story of Jean Valjean, a French peasant, and his quest for redemption after serving nineteen years in jail for having stolen a loaf of bread for his starving sister's child. Valjean decides to break his parole and start his life anew after a kindly bishop inspires him by a tremendous act of mercy, but he is relentlessly tracked down by a police inspector named Javert. Along the way, Valjean and a slew of characters are swept into a revolutionary period in France, where a group of young idealists make their last stand at a street barricade.

Stop Sneezing This Season Try an herbal fix for runny noses and itchy congestion What It IsTinospora (Tinospora cordifolia) is a climbing shrub with heart-shaped leaves native to the Indian subcontinent. The herb is known locally as giloya, or "heavenly elixir," and, according to Indian legend, kept the angels eternally young. What Folk Medicine SaysIn Ayurvedic practice, tinospora is classified as a rasayana herb (rasayana means "circulation of the nutrient" in Sanskrit). These herbs are said to enhance longevity, promote intelligence, and prevent disease.

25 Free Beginner Knitting Patterns Take a second and think back to when you first started knitting. Were you intimidated by difficult techniques? Was it hard to find patterns at your skill level? Did you want a list of beginner knitting patterns? Preferably free beginner knitting patterns? 7 Lessons From 7 Great Minds Have you ever wished you could go back in time and have a conversation with one of the greatest minds in history? Well, you can’t sorry, they’re dead. Unless of course you’re clairaudient, be my guest. But for the rest of us, we can still refer to the words they left behind.

How To Put Your Hair Up In A Cute Bun Comb your hair carefully to eliminate any tangles or knots.Take some hair from the top of your head. 3. Tie off this hair with a hair elastic. 4. Don't pull off the ends. CyanogenMod 9 Coming Soon, Will Bring Tasty Hacking to Ice Cream Sandwich Steve Kondik, aka Cyanogen of the CyanogenMod team, teased a bit of news over Twitter that they are working to add Android 4.0 Ice Cream Sandwich support to CyanogenMod 9, which should come out in January. The team’s announcement comes hot off the heels of Google releasing the source code for Android version 4.0. Like any previous CyanogenMod project, version 9 will allow you to hack your device to put on custom apps.