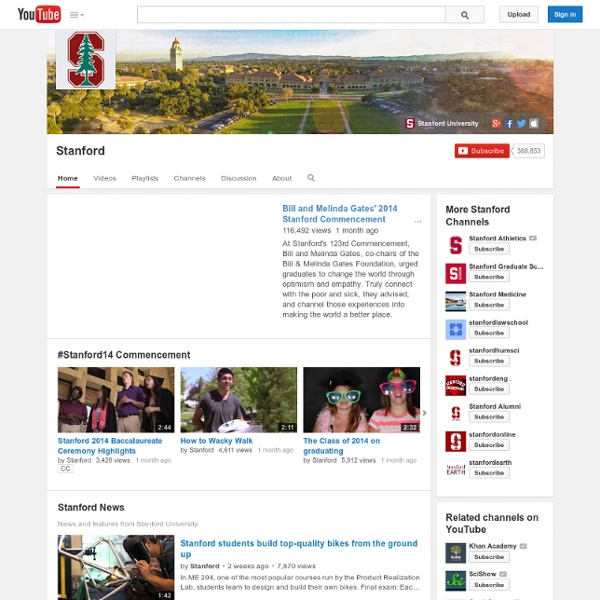 Stanford University Stanford University (officially Leland Stanford Junior University) is a private research university in Stanford, California, and one of the world's most prestigious institutions,[8][9][10][11] with the top position in numerous surveys and measures in the United States.[12][13][14][15][16][17][18] Stanford was founded in 1885 by Leland Stanford, former governor of and U.S. senator from California and leading railroad tycoon, and his wife, Jane Lathrop Stanford, in memory of their only child, Leland Stanford, Jr., who had died of typhoid fever at age 15 the previous year. Stanford was opened on October 1, 1891[2][3] as a coeducational and non-denominational institution. Stanford is located in northern Silicon Valley near Palo Alto, California.

SmarterEveryDay Get your own backwards bike here ⇒ Support Link: ⇒ ⇐ ↓↓↓↓↓↓↓READ MORE: ↓↓↓↓↓↓↓ Here's the link from the Amsterdam meetup! (I usually make a localized facebook post before I visit a city to see if anyone wants to high five.) Comment threads on Reddit: (Bicycling)My Instagram account: Support Link: Book on Principles of Data Analysis Home Published by Cappella Archive, a micropublisher. (Why a micropublisher?) The text (700 kb) can be downloaded free, in your choice of A4 size letter size paperback size AA SCHOOL OF ARCHITECTURE - Lectures Online Diaz Alonso is the principal and founder of Xefirotarch, a practice base in Los Angeles. He is the Graduate Programs Chair and has served for the past several years as Distinguish Professor of Architecture and the Graduate Thesis Coordinator at SCI-Arc. He was a design studio professor at Columbia University GSAPP, and is the head studio professor in the 'Excessive' post-graduate program at the Universitat fur angewandte Kunst in Wien, Austria. He was recently honoured by Yale University with the Louis I. Kahn Visiting Assistant Professorship of Architectural Design for fall 2010.

Best free courses & lectures Updated June 29, 2012 Not every teacher is a great teacher. Not every course is a great course. Brains in Silicon Welcome to Brains in Silicon. Learn about the lab, get to know the brains that work here, and find out about new projects that you could join. We have crafted two complementary objectives: To use existing knowledge of brain function in designing an affordable supercomputer—one that can itself serve as a tool to investigate brain function—feeding back and contributing to a fundamental, biological understanding of how the brain works.

Graphs - R Cookbook My book about data visualization in R is available! The book covers many of the same topics as the Graphs and Data Manipulation sections of this website, but it goes into more depth and covers a broader range of techniques. You can preview it at Google Books. Purchase it from Amazon, or direct from O'Reilly. There are many ways of making graphs in R, each with its advantages and disadvantages. Russell's Introduction to Mathematical Philosophy In early 2009, I began a project to make Russell's Introduction to Mathematical Philosophy available free online. I began with a rather low quality OCRed scan of the 1920 Allen & Unwin printing, which I cleaned up by re-adding formatting, correcting mistakes, inserting mathematical symbols, and so on. Several members of the Russell-l mailing list helped as well. Kenneth Blackwell, of the Bertrand Russell Archives/Research Center, McMaster University, contributed to the project in a major way by not only error-checking the bulk of the edition but also comparing it against Russell’s handwritten manuscript, which turned up a number of errors in all previously published editions. New corrections to the text (at least those of any significance) are marked in green in most of the editions below (except the .mobi version, which does not support color).

How I Became the Kind of Person Who Can Work a Room I did it. I went to a cocktail party where I didn't know anyone, and successfully chit-chatted for two hours. (Not to myself. I actually spoke with other people.)