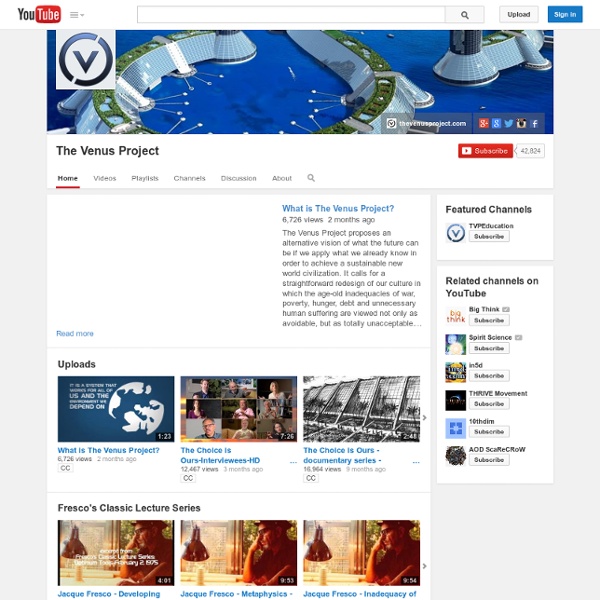 The Venus Project Chaîne de ChangeDaChannel Welcome to ChangeDaChannel. On this channel you will find over 460 videos I've made over the last 7 years. I have 17 different active series and 6 retired ones. •Blowing Off Some Steam (BOSS ) is in its second season and is a 'jump cut' show using common sense and humor to break down the news.•NEW: Monologue of a Revolutionary A fictional monologue about the revolution to come with the NWO as told by a revolutionary in the future. Some other shows:•Off The Grid, •Droppin' Docs, •Put Up or Shut Up, •Its What You're Eating, •Simple as That, •Word TurdI also have a variety of special editions, music and spoken word videos I've done along with 5 full length and mini documentaries that I've produced.

YouTomb Global Research TV This full length GRTV documentary looks at the fictitious land of Nulandistan that has been constructed out of Ukraine.The GRTV documentary deconstructs Nulandistan and the propaganda of the Obama Administration, the US Department of States, US officials, and their allies about the crisis in Ukraine and takes a look at their growing frustration towards the Russian media, particularly RT, for challenging their account of the events on the ground in what they have declared is an intensifying information war. The full length documentary starts by looking at the self-benefiting description of the EuroMaidan protests that US officials have used and how it has grossly diverged from reality. Then the Odessa Massacre is deconstructed for audiences. The documentary then looks at the situation in East Ukraine, including the violence and referenda. To read articles by its producer, Mahdi Darius Nazemroaya, please click the following link:

The numerous videos in here may be mentioned elsewhere. by electronics Jan 6