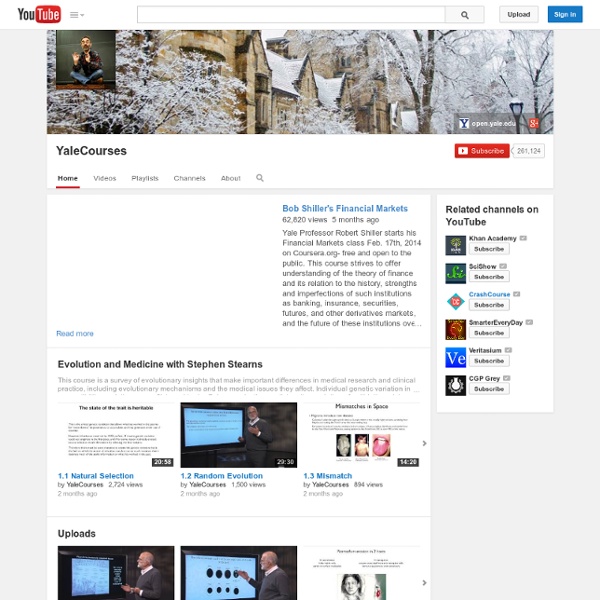 Chaîne de UCBerkeley Computer Science 61B - Fall 2006 Play all CS 61B: Data Structures - Fall 2006. Fundamental dynamic data structures, including linear lists, queues, trees, and other linked structures; arrays strings, and hash tables. Storage management. Elementary principles of software engineering. Coursera Raises $16 Million To Bring Free Online Education to Millions The Internet is revolutionizing education, as several companies and organizations disrupt the online education space including Open Yale, Open Culture, Khan Academy, Academic Earth, P2PU, Skillshare, Scitable and Skype in the Classroom. The Internet has changed how we interact with time and each other. We can be learning all the time now, whenever we want, and wherever we want. And because of that, we’re seeing explosive growth and new models in online education. For the past year, renowned Stanford University professors Daphne Koller and Andrew Ng have experimented with new online learning tools like videos, quizzes and peer-to-peer platforms to teach free classes to just under a million students. “Imagine a future where top university professors in the country are teaching not just hundreds of thousands of students but hundreds of millions,” says Andrew Ng. Features on Coursera include: A set of reinforcing social features is what makes Coursera different from the rest.

Tit for tat In Western business cultures, a handshake when meeting someone is an example of initial cooperation. Tit for tat is an English saying meaning "equivalent retaliation". It is also a highly effective strategy in game theory for the iterated prisoner's dilemma. The strategy was first introduced by Anatol Rapoport in Robert Axelrod's two tournaments,[1] held around 1980. Notably, it was (on both occasions) both the simplest strategy and the most successful.[2] An agent using this strategy will first cooperate, then subsequently replicate an opponent's previous action. Implications[edit] The success of the tit-for-tat (TFT) strategy, which is largely cooperative despite that its name emphasizes an adversarial nature, took many by surprise. Moreover, the TFT strategy has been of beneficial use to social psychologists and sociologists in studying effective techniques to reduce conflict. Problems[edit] "Tit for tat with forgiveness" is sometimes superior. Tit for two tats[edit] Real world use[edit]

Best Universities | 100 Terrific Self-Learning Sites to Boost Your Resume During the Recession 100 Terrific Self-Learning Sites to Boost Your Resume During the Recession In this recession, job security is waning and the prospects for work are getting slimmer, so if you’re on the hunt for a job, it’s a good idea to boost your resume. Self-learning is a great way to enhance your knowledge and resume so that you’ll have a better chance of getting hired. Here you’ll find a variety of sites that offer self learning, including technology, art, and business, many at the university level. Universities Use the open educational resources from these universities to get a high quality education for free. General These sites offer learning in a wide array of topics. Sources of Information These websites are great places to research and pick up practical information. Technology Make sure your technology skills and knowledge are up to date with the help of these learning sites. Art Develop your artistic side using the resources from these self learning websites. Language & Literature Science Math Creativity

The Cassiopeia Project: Free Science Education Online by Maria Popova What a mysterious retired physicist has to do with the future of learning. In 2008, The Cassiopeia Project began quietly publishing high-definition videos exploring in an intelligent yet digestible manner nearly every corner of the science spectrum, and releasing them online for free. With more than 100 videos to date available on iTunesU and YouTube, the project offers an invaluable resource on everything from quantum mechanics to evolution to the theory of relativity — another wonderful piece in the ever-expanding puzzle of free educational content online that is changing how we think about learning. We believe that if you can visualize it, then understanding it is not far behind.” All the content is open-source and educators are encouraged to edit, remix and otherwise customize the footage. Sadly, the effort appears to be in stagnation since 2009, but we sincerely hope to see it resurface with more fantastic content. via MeFi Share on Tumblr

Science Documentaries | Free Streaming Lectures and Documentaries Free Science and Video Lectures Online! Virtual Schools Booming As States Mull Warnings DENVER -- More schoolchildren than ever are taking their classes online, using technology to avoid long commutes to school, add courses they wouldn't otherwise be able to take – and save their school districts money. But as states pour money into virtual classrooms, with an estimated 200,000 virtual K-12 students in 40 states from Washington to Wisconsin, educators are raising questions about online learning. States are taking halting steps to increase oversight, but regulation isn't moving nearly as fast as the virtual school boom. The online school debate pits traditional education backers, often teachers' unions, against lawmakers tempted by the promise of cheaper online schools and school-choice advocates who believe private companies will apply cutting-edge technology to education. Is online education as good as face-to-face teaching? Virtual education companies tout a 2009 research review conducted for the U.S. Still, virtual schooling at the K-12 level is booming. Online: