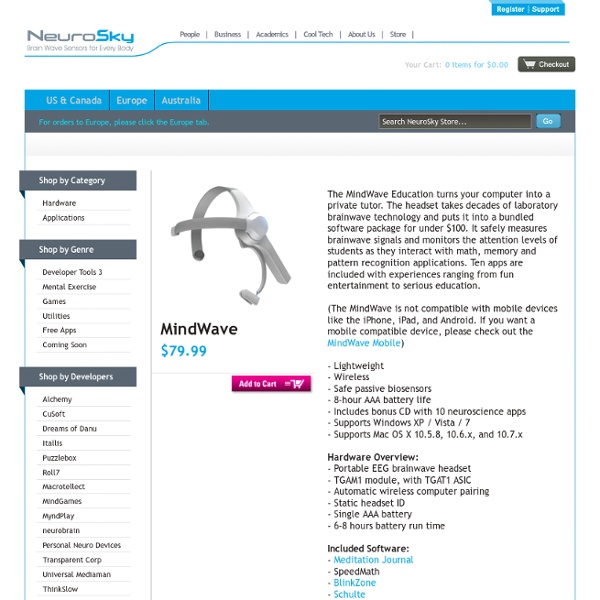 How to Hack Toy EEGs | Frontier Nerds Arturo Vidich, Sofy Yuditskaya, and I needed a way to read brains for our Mental Block project last fall. After looking at the options, we decided that hacking a toy EEG would be the cheapest / fastest way to get the data we wanted. Here’s how we did it. The Options A non-exhaustive list of the consumer-level options for building a brain-computer interface: Open EEG offers a wealth of hardware schematics, notes, and free software for building your own EEG system. The Nerosky MindSet is a reasonable deal as well — it’s wireless, supported, and plays nicely with the company’s free developer tools. For our purposes, though, it was still a bit spendy. Given all of this, I think the Mind Flex represents a sweet spot on the price / performance curve. But first, the inevitable caveat: Use extreme caution when working with any kind of voltage around your brain, particularly when wall power is involved. The Hardware Here’s the basic layout of the Mind Flex hardware. The Hack Parts list: Software list:

Comparison of consumer brain–computer interfaces This is a comparison of brain-computer interface devices available on the consumer market. Comparison[edit] Open-source projects[edit] Emokit is an open-source Python library for reading out sensor data from the EPOC (Emotiv Systems) by Cody Brocious. It was built by reverse-engineering the encrypted protocol.[40] Emokit has been deprecated in favour of emokit.[41] Open-source Matlab toolboxes such as EEGLAB, Fieldtrip, and the Neurophysiological Biomarker Toolbox (NBT) can be used to process data from the electroencephalography. OpenVibe is a LGPL software platform (C++) to design, test and use BCI.[43] The software comes with an acquisition server that is currently compatible with many EEG device including Neurosky Mindset, Emotiv EPOC (Research Edition or above) and OpenEEG. Several open-source computer programs are also available from EPFL's CNBI project.[44][45] Technology[edit] References[edit] External links[edit]

Thoughtstream USB Personal Biofeedback : ThoughtStream Personal Biofeedback <div id="productImageCaption"><a href=" target="PopupImage"> view larger image </a></div> Product Details MindPlace is pleased to offer a USB version of our popular ThoughtStream Biofeedback Performance System. This tool measures the rapid, tiny fluctuations in your skin's electrical resistance known as the Galvanic Skin Response (GSR). When your psychological stress/arousal level increases, skin moisture increases and ThoughtStream USB can help teach you to monitor and control this. With regular practice it is an ideal relaxation training system. Through use, the Thoughtstream learns what sensitivity level works best for you. ThoughtStream USB employs three forms of feedback: 1) Visual: The front panel display starts out all red. The ThoughtStream Biofeedback Performance System is one of the most affordable on the market, yet it allows precise and tailored readings suited for use in your daily life.

Welcome to the OpenEEG project About the project Many people are interested in what is called neurofeedback or EEG biofeedback training, a generic mental training method which makes the trainee consciously aware of the general activity in the brain. This method shows great potential for improving many mental capabilities and exploring consciousness. Other people want to do experiments with brain-computer interfaces or just want to have a look at their brain at work. Unfortunately, commercial EEG devices are generally too expensive to become a hobbyist tool or toy. The OpenEEG project is about making plans and software for do-it-yourself EEG devices available for free (as in GPL). Right now, this site is mostly about the hardware; schematics, part lists, building instructions etc. Some regulatory business Commercial and clinical EEG devices must live up to certain standards. In other words, if you decide to build and use one -- the responsibility is yours.

DIY EEG (and ECG) Circuit CAUTION: I highly suggest doing this on a laptop, because there is a danger involved if there's a spike in voltage from the wall outlet. Regardless, BE VERY CAREFUL WITH THE PROBES GOING TO THE SOUND CARD. If they accidentally touch a high voltage source (i.e. you stick them into a power outlet), you can fry your computer's sound card. First thing to do is to download Processing, available at It doesn't require any installation; just unzip the download, open the folder, and run it. Download the sketch (what programs are called in processing), and open it up. I encourage you to tinker with the program - change things, make your own, etc. Also, a little background on the FFT. From this, you can represent very complicated signals (any signal!) This program is really just a data acquisition / visualization one. Code available here.

User-Built tDCS Research Device | SpeakWisdom I’ve been tinkering with tDCS for several months now – including doing lots of reading and building of prototype devices. I also have a number of friends who are giving it a try. Along the way I’ve learned a number of things that could be useful to others: 1. Read, read, read. Lots of tDCS articles and dialog are on the web and more every day. 2. 3. 4. 5. tDCS devices built around the LM334 seem to work very well and provide very smooth adjustments to current level 6. In conjunction with the above, here is the schematic I use to build devices to tinker with. (This is my favorite design. (Almost done. (Completed except for labeling. (Digital meter in place of analog.) (Same basic design, just digital mA meter.) And finally, here is a link to a bit of doc I’ve written for use with the home-built tDCS research device and ActivaDose II. Comments and suggestions are welcome. Like this:

Home DIY tDCS Soterix Medical Transcranial Direct Current Stimulation (tDCS) is a non-invasive procedure in which a device sends a small Direct Current (DC) across the scalp to modulate brain function. The Soterix Medical 1x1 tDCS Low-Intensity Stimulator sends a low-level current from the positive electrode, anode, to the negative electrode, cathode. When the extremely low level current passes from the anode to the cathode, it may simultaneously increase the activity of the brain by the anode and decrease the activity of the brain near the cathode. tDCS mechanisms are considered to result from the ability of very weak DC currents to safely induce reversible changes in cortical plasticity. tDCS dose can be defined as: 1) The size and position of the electrodes on the body and 2) The duration (in minutes) and intensity (in mA) of current passed across the electrodes.

Journal of Neural Engineering Dominique M Durand et al 2014 J. Neural Eng. 11 020201 Neural engineers have made significant, if not remarkable, progress in interfacing with the nervous system in the last ten years. In particular, neuromodulation of the brain has generated significant therapeutic benefits [1–5]. EEG electrodes can be used to communicate with patients with locked-in syndrome [6]. Although there are several multichannel arrays described in the literature, the workhorse for these cortical interfaces has been the Utah array [12]. The reasons for this failure are not known but clearly involve the interface between the electrode and the neural tissue. In 2013, two symposia were held independently to discuss this problem: one was held at the International Neuromodulation Society's 11th World Congress in Berlin and supported by the International Neuromodulation Society 1 and the other at the 6th International Neural Engineering conference in San Diego 2 and was supported by the NSF. References

Brain-Computer Music Interface - Hacked Gadgets - DIY Tech Blog It is hard to imagine what will be possible with direct mind control in the next dozen years. Will we be driving cars with no steering wheel? Read the research paper (warning it is a PDF). “Researchers at the University of Plymouth created this “Brain-Computer Music Interface”, which uses two laptops to analyze brain waves and composes music based on the results. The BCMI-Piano (Figure 1) falls into the category of BCI computer-oriented systems. Via: TechEBlog