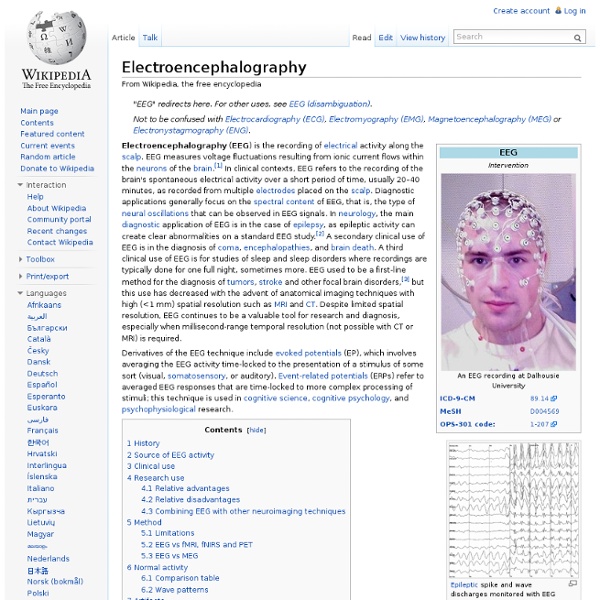 Simultaneous video and EEG recording of two guitarists improvising. Electroencephalography (EEG) is the recording of electrical activity along the scalp. EEG measures voltage fluctuations resulting from ionic current flows within the neurons of the brain.[1] In clinical contexts, EEG refers to the recording of the brain's spontaneous electrical activity over a short period of time, usually 20–40 minutes, as recorded from multiple electrodes placed on the scalp. Diagnostic applications generally focus on the spectral content of EEG, that is, the type of neural oscillations that can be observed in EEG signals. EEG is most often used to diagnose epilepsy, which causes obvious abnormalities in EEG readings.[2] It is also used to diagnose sleep disorders, coma, encephalopathies, and brain death. History[edit] Hans Berger In 1934, Fisher and Lowenback first demonstrated epileptiform spikes. In 1947, The American EEG Society was founded and the first International EEG congress was held.

Brain Atlas - Introduction The central nervous system (CNS) consists of the brain and the spinal cord, immersed in the cerebrospinal fluid (CSF). Weighing about 3 pounds (1.4 kilograms), the brain consists of three main structures: the cerebrum, the cerebellum and the brainstem. Cerebrum - divided into two hemispheres (left and right), each consists of four lobes (frontal, parietal, occipital and temporal). The outer layer of the brain is known as the cerebral cortex or the ‘grey matter’. – closely packed neuron cell bodies form the grey matter of the brain. Cerebellum – responsible for psychomotor function, the cerebellum co-ordinates sensory input from the inner ear and the muscles to provide accurate control of position and movement. Brainstem – found at the base of the brain, it forms the link between the cerebral cortex, white matter and the spinal cord. Other important areas in the brain include the basal ganglia, thalamus, hypothalamus, ventricles, limbic system, and the reticular activating system. Neurons

Magnetic resonance imaging Magnetic resonance imaging (MRI), nuclear magnetic resonance imaging (NMRI), or magnetic resonance tomography (MRT) is a medical imaging technique used in radiology to investigate the anatomy and function of the body in both health and disease. MRI scanners use strong magnetic fields and radiowaves to form images of the body. The technique is widely used in hospitals for medical diagnosis, staging of disease and for follow-up without exposure to ionizing radiation. Introduction[edit] Neuroimaging[edit] MRI image of white matter tracts. MRI is the investigative tool of choice for neurological cancers as it is more sensitive than CT for small tumors and offers better visualization of the posterior fossa. Cardiovascular[edit] MR angiogram in congenital heart disease Cardiac MRI is complementary to other imaging techniques, such as echocardiography, cardiac CT and nuclear medicine. Musculoskeletal[edit] Liver and gastrointestinal MRI[edit] Functional MRI[edit] Oncology[edit] How MRI works[edit]

Binaural beats Binaural beats To experience the binaural beats perception, it is best to listen to this file with headphones on moderate to weak volume – the sound should be easily heard, but not loud. Note that the sound appears to pulsate. Now remove one earphone. Note that the pulsations disappear completely. The brain produces a phenomenon resulting in low-frequency pulsations in the amplitude and sound localization of a perceived sound when two tones at slightly different frequencies are presented separately, one to each of a subject's ears, using stereo headphones. Binaural beats reportedly influence the brain in more subtle ways through the entrainment of brainwaves[3][8][9] and provide other health benefits such as control over pain.[10][11] Acoustical background[edit] Interaural time differences (ITD) of binaural beats For sound localization, the human auditory system analyses interaural time differences between both ears inside small frequency ranges, called critical bands. History[edit]

Positron emission tomography PET/CT-System with 16-slice CT; the ceiling mounted device is an injection pump for CT contrast agent Whole-body PET scan using 18F-FDG Positron emission tomography (PET)[1] is a nuclear medicine, functional imaging technique that produces a three-dimensional image of functional processes in the body. The system detects pairs of gamma rays emitted indirectly by a positron-emitting radionuclide (tracer), which is introduced into the body on a biologically active molecule. Three-dimensional images of tracer concentration within the body are then constructed by computer analysis. If the biologically active molecule chosen for PET is fluorodeoxyglucose (FDG), an analogue of glucose, the concentrations of tracer imaged will indicate tissue metabolic activity by virtue of the regional glucose uptake. History[edit] The concept of emission and transmission tomography was introduced by David E. The logical extension of positron instrumentation was a design using two 2-dimensional arrays.

Functional magnetic resonance imaging Researcher checking fMRI images Functional magnetic resonance imaging or functional MRI (fMRI) is a functional neuroimaging procedure using MRI technology that measures brain activity by detecting associated changes in blood flow.[1] This technique relies on the fact that cerebral blood flow and neuronal activation are coupled. When an area of the brain is in use, blood flow to that region also increases. The primary form of fMRI uses the Blood-oxygen-level dependent (BOLD) contrast,[2] discovered by Seiji Ogawa. The procedure is similar to MRI but uses the change in magnetization between oxygen-rich and oxygen-poor blood as its basic measure. FMRI is used both in the research world, and to a lesser extent, in the clinical world. Overview[edit] The fMRI concept builds on the earlier MRI scanning technology and the discovery of properties of oxygen-rich blood. History[edit] Three studies in 1992 were the first to explore using the BOLD contrast in humans. Physiology[edit]

Single photon emission computed tomography Animation of a SPECT scanning procedure. Single-photon emission computed tomography (SPECT, or less commonly, SPET) is a nuclear medicine tomographic[1] imaging technique using gamma rays. It is very similar to conventional nuclear medicine planar imaging using a gamma camera.[2] However, it is able to provide true 3D information. This information is typically presented as cross-sectional slices through the patient, but can be freely reformatted or manipulated as required. The basic technique requires delivery of a gamma-emitting radioisotope (called radionuclide) into the patient, normally through injection into the bloodstream. Principles[edit] A Siemens brand SPECT scanner, consisting of two gamma cameras. Instead of just 'taking a picture' of anatomical structures, a SPECT scan monitors level of biological activity at each place in the 3-D region analyzed. SPECT imaging is performed by using a gamma camera to acquire multiple 2-D images (also called projections), from multiple angles.

Neuron All neurons are electrically excitable, maintaining voltage gradients across their membranes by means of metabolically driven ion pumps, which combine with ion channels embedded in the membrane to generate intracellular-versus-extracellular concentration differences of ions such as sodium, potassium, chloride, and calcium. Changes in the cross-membrane voltage can alter the function of voltage-dependent ion channels. If the voltage changes by a large enough amount, an all-or-none electrochemical pulse called an action potential is generated, which travels rapidly along the cell's axon, and activates synaptic connections with other cells when it arrives. Neurons do not undergo cell division. Overview[edit] A neuron is a specialized type of cell found in the bodies of all eumetozoans. Although neurons are very diverse and there are exceptions to nearly every rule, it is convenient to begin with a schematic description of the structure and function of a "typical" neuron. Polarity[edit]

Parapsychology American psychologist and philosopher William James (1842–1910) was an early psychical researcher. Parapsychology is a field of study concerned with the investigation of paranormal and psychic phenomena. Parapsychologists study telepathy, precognition, clairvoyance, psychokinesis, near-death experiences, reincarnation, apparitional experiences, and other supernatural and paranormal claims. Modern parapsychology is largely conducted by private institutions in several different countries and funded through private donations.[1][2][3][4] Parapsychological research rarely appears in mainstream science journals; most is published in a small number of niche journals.[5] Most scientists regard parapsychology as pseudoscience.[6] Parapsychology has been criticised for continuing investigation despite not having demonstrated conclusive evidence of psychic abilities in more than a century of research.[7][8][9][10][11][12] Terminology[edit] History[edit] Early psychical research[edit] Rhine era[edit]

Daryl Bem Early life and education[edit] Bem received a B.A. in physics from Reed College in Portland, Oregon in 1960 and began graduate work in physics at the Massachusetts Institute of Technology. The civil rights movement had just begun, and he became so intrigued with the changing attitudes toward desegregation in the American South that he decided to switch fields and pursue a career as a social psychologist specializing in attitudes and public opinion. He obtained his Ph.D. in social psychology from the University of Michigan in 1964.[2] Career[edit] Bem taught at Carnegie-Mellon University, Stanford, Harvard, and Cornell University. He testified before a subcommittee of the United States Senate on the psychological effects of police interrogation[4] and served as an expert witness in court cases involving sex discrimination.[2] Bem speaks at the 1983 CSICOP Conference in Buffalo, NY. Self-perception theory[edit] Exotic Becomes Erotic theory[edit] Ganzfeld experiment[edit] Family Life[edit]

Dean Radin Dean Radin (born February 29, 1952) is a researcher and author in the field of parapsychology. He has been Senior Scientist at the Institute of Noetic Sciences (IONS), in Petaluma, California, USA, since 2001, and is on the Adjunct Faculty in the Department of Psychology at Sonoma State University, on the Distinguished Consulting Faculty at Saybrook Graduate School and Research Center, and former President of the Parapsychological Association.[1][2] He is also co-editor-in-chief of the journal Explore: The Journal of Science and Healing.[3] His books have received negative reviews from the scientific community. Biography[edit] Professionally, Radin worked as a concert violinist for five years, later switching to engineering after earning an undergraduate degree in electrical engineering from the University of Massachusetts Amherst, as well as both a master's degree in electrical engineering and a doctorate in educational psychology from the University of Illinois at Urbana-Champaign.[4]