Welcome to the OpenEEG project 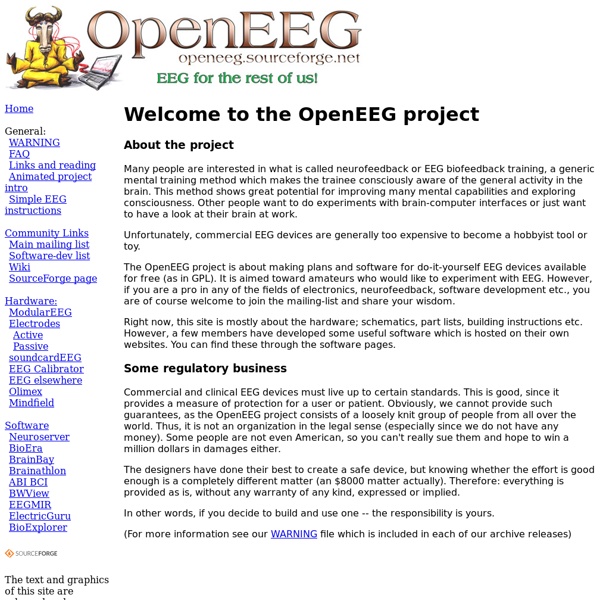 About the project Many people are interested in what is called neurofeedback or EEG biofeedback training, a generic mental training method which makes the trainee consciously aware of the general activity in the brain. This method shows great potential for improving many mental capabilities and exploring consciousness. Other people want to do experiments with brain-computer interfaces or just want to have a look at their brain at work. Unfortunately, commercial EEG devices are generally too expensive to become a hobbyist tool or toy. The OpenEEG project is about making plans and software for do-it-yourself EEG devices available for free (as in GPL). Right now, this site is mostly about the hardware; schematics, part lists, building instructions etc. Some regulatory business Commercial and clinical EEG devices must live up to certain standards. In other words, if you decide to build and use one -- the responsibility is yours.

BCI Meeting 2013 BCI2000 What is BCI2000? BCI2000 is a general-purpose system for brain-computer interface (BCI) research. It can also be used for data acquisition, stimulus presentation, and brain monitoring applications. Mission The mission of the BCI2000 project is to facilitate research and applications in the areas described above. Vision Our vision is that BCI2000 will become a widely used software tool for diverse areas of real-time biosignal processing. Availability The BCI2000 system is available for free for non-profit research and educational purposes. BCI2000 development has been sponsored by a NIH (NIBIB/NINDS) Bioengineering Research Partnership grant to Jonathan Wolpaw and a NIH (NIBIB) R01 grant to Gerwin Schalk. Direct Brain Interface Project - University of Michigan The University of Michigan Direct Brain Interface (UM-DBI) project is unique among brain-computer interface (BCI) research groups in its combination of many years of BCI research and close clinical ties to assistive technology service delivery both through investigator background and sharing offices with the UM Rehabilitation Engineering Program’s (UMREP) clinical service. The UM-DBI project was co-founded by Dr. Simon Levine and Dr. Jane Huggins, the current principal investigator. The term Direct Brain Interface is intended to emphasize the function of the BCI as a direct connection between the human brain and various kinds of technologies (not just computers). With funding from the National Institute on Disability and Rehabilitation Research (NIDRR) and the National Institutes of Health (NIH), the UM-DBI project pioneered BCI research based on electrocorticogram (ECoG) from electrodes implanted inside the skull.