4 Sites with LOTS Of Completely Free Ebooks That Don't Suck 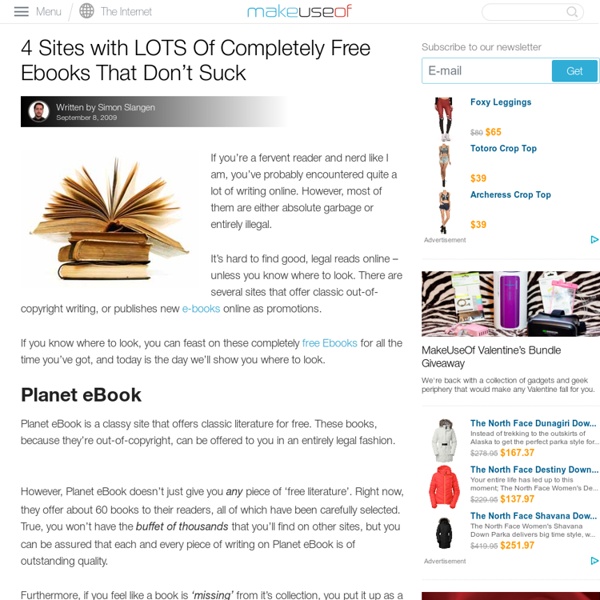 If you’re a fervent reader and nerd like I am, you’ve probably encountered quite a lot of writing online. However, most of them are either absolute garbage or entirely illegal. It’s hard to find good, legal reads online – unless you know where to look. There are several sites that offer classic out-of-copyright writing, or publishes new e-books online as promotions. If you know where to look, you can feast on these completely free Ebooks for all the time you’ve got, and today is the day we’ll show you where to look. Planet eBook Planet eBook is a classy site that offers classic literature for free. However, Planet eBook doesn’t just give you any piece of ‘free literature’. Furthermore, if you feel like a book is ‘missing’ from it’s collection, you put it up as a suggestion. All books on Planet eBook can be read on the site, but can also be downloaded as a PDF, both in a 1-page and 2-page version. ManyBooks Classic Reader PublicBookshelf

Stunning Macro Photographs of Insects Glowing in the Morning Dew French photographer David Chambon is a master of macro insect photography. An amateur photographer for over 10 years, his goal is to capture the magical beauty of nature through his imagery. All of his macro shots are amazing, but it’s his morning dew series that stands out from the rest. He ventures out early in the morning, and photographs various insects perched on flowers and leaves, glowing from the tiny beads of dew that coat their bodies. Originally from Lyon, France, Chambon currently resides in Dampierre-les-Bois. His photographs are mostly shot using a Canon EOS-1D Mark III at 252mm.

Top 25 Best Fantasy Books The Wheel of Time turns and Ages come and go, leaving memories that become legend. Legend fades to myth, and even myth is long forgotten when the Age that gave it birth returns again. In the Third Age, an Age of Prophecy, the World and Time themselves hang in the balance. What was, what will be, and what is, may yet fall under the Shadow... American Book Review 1. Call me Ishmael. —Herman Melville, Moby-Dick (1851) 2. It is a truth universally acknowledged, that a single man in possession of a good fortune, must be in want of a wife. How to Watch Blocked Internet Videos « Broken Secrets September 27, 2010 at 5:00 am Chad Upton By Chad Upton | Editor The internet is a great place to catch TV shows and clips that you or your PVR missed. Unfortunately, a lot of websites only allow their video content to be viewed in their service area. It’s not because they’re mean, they may have contracts that prevent them from distributing outside their area, not to mention cost savings reasons. That’s right, it’s expensive to stream video over the internet to thousands or hundreds of thousands of people in a reliable way.

Crush the Best-Dressed List: Our Style Guide to a Century of Dazzling Party Dresses Now that the jeans-and-T-shirts plague has reached our fancy restaurants, cocktail parties, and nightclubs, it seems as though nobody cares about dressing up anymore. And yet, as fashions become increasingly casual, the perfect party dress is like a secret weapon—turning anyone into a rose among daisies. “Most middle-class women would have had one good dress to wear for evening, parties, weddings, or other formal occasions.” Since vintage is in vogue, you can find chic, well-made frocks, and afford them, too. Vintage isn’t just for commoners, either: Retro looks are regularly featured on the red carpet, with celebrities plucking gowns from past designer collections or straight from the racks of vintage stores. But with so many classic dresses to choose from, what are the most stunning, decade-defining looks?

10 Awesome Fantasy Series That Are Not Potter or LoTR In my literature related internet journeys I’ve seen the same scenario time and time again. People have finished reading “Harry Potter” or “Lord of the Rings” or are simply just getting into fantasy and are looking for something interesting, asking for advice from the more experienced fantasy readers. Unfortunately the names they are given are always the same: Jordan (“The Wheel of Time”)Martin (“The Song of Ice and Fire”)Goodkind (“The Sword of Truth”) Don’t get me wrong those are all great authors and great series, but there are many other series and authors that get overlooked when august names such as those start getting thrown around.

please read one! - Knowledge and Culture - English - The Free Dictionary Language Forums The last week in September is dedicated to banned books. There are many classics on the banned books list. Some of which were once taught in High School English classes and have since been removed. Please visit your local library. They usually have a display of banned books as well as a list of books. YouTube Video Not Available in Your Country? Watch Blocked Videos You could be staying in countries US, UK or India but still may not be able to watch all YouTube videos. This is because YouTube gives content owners an option to restrict videos to certain geographic regions. Learn how to watch blocked YouTube videos that are not available in your country. No, this is not about Internet censorship in countries like China or Pakistan where ISPs frequently block access to sites like YouTube following Government orders. You could be staying in a country like US, UK or India but may not be able to watch every video on YouTube – that’s because the content owners have allowed access to that video only from certain countries or geographic regions. If your computer’s IP address falls outside that geographic region, YouTube will display an error saying “This video is not available in your country” – this message has nothing to do with censorship, it’s the owner of the video clip who could be limiting access.