The World`s Biggests: The 12 Greatest Apocalyptic Novels Of All Time 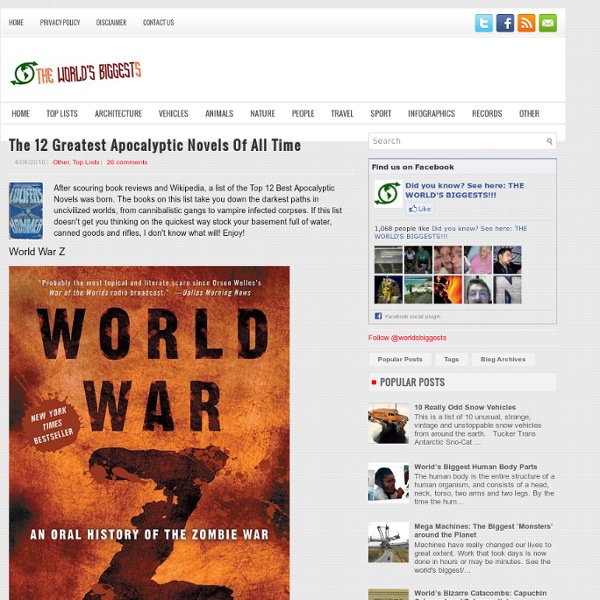 After scouring book reviews and Wikipedia, a list of the Top 12 Best Apocalyptic Novels was born. The books on this list take you down the darkest paths in uncivilized worlds, from cannibalistic gangs to vampire infected corpses. If this list doesn't get you thinking on the quickest way stock your basement full of water, canned goods and rifles, I don't know what will! Enjoy! World War Z Documenting the war on zombies, "World War Z" takes you through horific times with some of the most vivid writing this genre has ever seen. "World War Z" paints such a realistic picture of a world after Zombies that even skeptics would find themselves engrossed in the novel! Blindness Forget world wide pandemics of flesh eating bacteria or a zombie illness! The family unit escapes and attempts to build a new life in the outside world, just as sight is returned, just as quickly as it was taken away. I don't know who I felt worse for reading this book. The Road The Postman Oryx and Crake A Canticle for Leibowitz

2.cs.cmu This book contains 209 tales collected by the brothers Grimm. The exact print source is unknown. The etext appears to be based on the translation by Margaret Hunt called Grimm's Household Tales, but it is not identical to her edition. The etext received by the Universal Library did not include story titles. Note that these tales are presented more or less as the Grimms collected and edited them (and as Hunt saw fit to translate them). NEW: There is now a more accurate version of the Hunt translation posted by William Barker. Well, At Least There Was Good Stuff to Read: The Books of the Decade Anybody remember how anxious and thrilled we were in those last months of the 20th century? When we weren't at war and we had a budget surplus and it looked like Al Gore would be president? The prospect of a 21st century filled with new technologies, new art and literature loomed large and bright. Goethe said that the decline of a nation's literature is the precursor to that nation's fall, and with this look back at the books that defined the decade, we'd like to tell Goethe to suck it. To be clear: there were plenty of bad books over the course of the decade, as well. Worse still may be the self-help arena, which has continued to distinguish itself as a place where the insecure can go to justify their inane self-love or equally inane self-loathing.

KIDS REPUBLIC - A Children's Bookstore In Beijing No longer just the world's "workroom", China is rapidly becoming an international hot spot with a growing middle class hungry for western luxuries and comforts. Beijing kids are the latest to be treated to some western style indulgence with Kids Republic, a children's bookstore that transports it‚ pint sized customers into a delightful fairytale world full of color and fantasy complete with massive story telling screens and play areas. It's haven for little imaginations in the heart of one of the biggest cities in the world. by Bill T 7 Books That Will Change How You See The World If you’re a human and you have a brain, then you probably like using your brain. And if you like using your brain, then you love having those epiphany moments where your hair blows back and you go “Whoa” like Keanu Reeves in The Matrix when he learns Kung Fu from a USB drive in his neck. I know it’s not what the cool kids like to do, but I like to read non-fiction. I love that. I get a lot of emails asking me for book recommendations. So instead of divulging what my favorite books are, I’ll leave you with something better: seven of the most mind-fucking, reality-reshaping, Keanu Reeves “Whoa” inspiring books that I’ve ever read. In no particular order… 3 Ideas That Could Change Your Life To learn about three ideas that could change how you see the world, put your email in below. Stumbling on Happiness by Daniel Gilbert What It’s About: Stumbling on Happiness is like the red-headed stepchild of happiness books. Notable Quotes: On The Genealogy of Morals by Friedrich Nietzsche by Nassim Taleb

The Four Stages of Life Life is a bitch. Then you die. So while staring at my navel the other day, I decided that that bitch happens in four stages. Here they are. Stage One: Mimicry We are born helpless. As children, the way we’re wired to learn is by watching and mimicking others. The goal of Stage One is to teach us how to function within society so that we can be autonomous, self-sufficient adults. But some adults and community members around us suck.1 They punish us for our independence. In a “normal” healthy individual, Stage One will last until late adolescence and early adulthood.3 For some people, it may last further into adulthood. This is Stage One. We must be aware of the standards and expectations of those around us. Stage Two: Self-Discovery In Stage One, we learn to fit in with the people and culture around us. Stage Two involves a lot of trial-and-error and experimentation. In my Stage Two, I ran off and visited fifty-something countries. Stage Two is a process of self-discovery.

Math 101: A reading list for lifelong learners Ready to level up your working knowledge of math? Here’s what to read now — and next. Math 101, with Jennifer Ouellette First, start with these 5 books… 1. “First published in 1930, this classic text traces the evolution of the concept of a number in clear, accessible prose. 2. “This bestselling book originally published in 1988 remains one of the best introductions to the basics of large numbers, statistics and probabilities with illustrations drawn from everyday life: sports, the stock market, the lottery and dubious medical claims, to name a few.” 3. “Pair Paulos with the just-released How Not to Be Wrong. 4. “Most of us take zero for granted, but there was a time when it simply didn’t exist, until some enterprising Babylonian soul inserted it as a placeholder in Eastern counting methods. 5. “The prose gets a bit turgid at times, and some readers might be deterred by the proofs and equations scattered throughout, but Berlinski has some lovely descriptions and turns of phrases. 1. 2. 3.