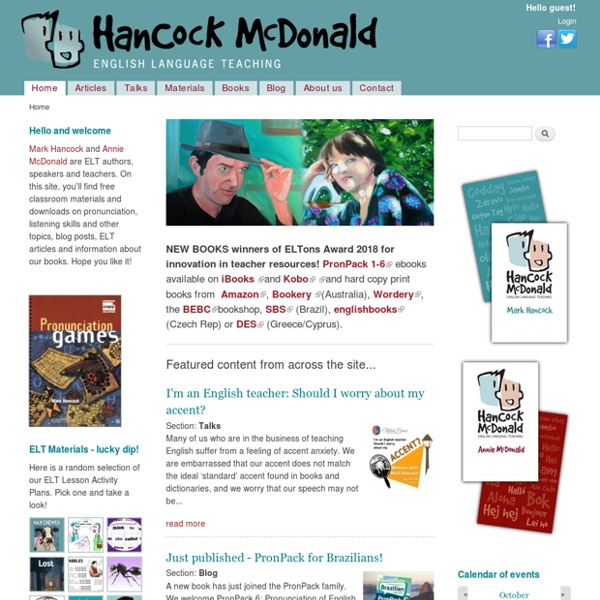 Integrating pronunciation into classroom activities In my work as a teacher trainer I have been surprised at how often experienced teachers are reluctant to tackle pronunciation issues in class. I can think of at least two reasons why pronunciation tends to be neglected: firstly, the lack of clear guidelines and rules available in course books, and secondly the fact that isolated exercises once a month do not seem to have much of an effect. This is not surprising, however; like all other areas of language teaching, pronunciation needs constant attention for it to have a lasting effect on students, which means integrating it into daily classroom procedures. I find that addressing issues regularly during the language feedback or group correction stage of a lesson helps to focus learners' attention on its importance and leads to more positive experiences. Using student talk to teach pronunciationWord stressVowel soundsDiphthongsWeak formsSentence stressConclusion

Future - Why does your voice sound different on a recording? What makes a recording of our voice sound so different... and awful? It’s because when you speak you hear your own voice in two different ways. Greg Foot explains all. Phonetic Chart Interactive Phonemic ChartCreated by Adrian UnderhillThis excellent teaching tool gives audio examples of the English phoneme set. Click on the phonemes to hear the sound and a sample word. Find out more about how the chart works and how it can help you in the classroom in a series of exclusive videos with Adrian dedicated to teaching pronunciation skills.Adrian Underhill is the series editor for the Macmillan Books for Teachers and author of Sounds Foundations, the inspiration behind the award-winning Sounds: Pronunciation App. More about Adrian Underhill Pronunciation Skills Videos

English teachers, are you asking the right questions? Declan Cooley, CELTA Opens in a new tab or window. trainer at the British Council in Poland, explains why some questions are not as effective as they first appear, and offers some alternatives. Questions of all kinds are a teacher's most basic tools for generating interest, provoking thoughts, encouraging students to speak, developing text comprehension skills and checking understanding. New teachers on courses like the CELTA spend a lot of time honing their skills at using effective questions in the classroom. it's NOT about what the teacher does with technology Bruce Springsteen: "When we kiss…" Not just going through the motions! You could probably say I've had four different though overlapping careers — in language teaching, language teacher training, technology and ELT management. The first of those I retired from (after 35+ years) a few months ago, though the number of contact hours I was doing was limited; teacher training I'm retiring from at the end of this month; management I got fired from (to the relief of all involved!) many years ago; which leaves only another 10 or so years in technology to do (I'm only (?) 57, so it ain't over yet!). I happened to mentioned this in a session a couple of weeks ago and someone (Mati?)

Links for translators The resources on this page are all available free (or in free versions) on the Internet. General Dictionaries Cambridge The suite of Cambridge dictionaries are possibly the best online English-English dictionaries available (and with nearly 2m searches a month, among the most popular). September 2012 Formative vs. Summative Assessment: Does It Matter? by Deena Boraie Five mixed messages that have severely damaged modern language education Introduction Over the decades, since the 70’s pedagogic revolution which saw the total rejection of Grammar-Translation methodology and Audiolingualism, teachers have been the recipients of scores of mixed messages about how languages are acquired and should be taught which have greatly damaged the teaching profession and Modern Language provision at large. I referred to them in the title as ‘mixed messages’ because they have often been the result of the overgeneralization , misinterpretation, vulgarization or distortion of research findings, hypotheses or even theories of some validity, which have given rise to ‘myths’ about language teaching and learning that have been haunting the teaching profession for decades and still shape in many cases the way many of us teach. 1.Languages are acquired by children subconsciously, hence no need to teach them grammar – This belief is at the root of the ban on grammar teaching that affected MFL provision in England for decades. 2. Conclusion

Testing and assessment It was all made worse by the fact that the chemistry teacher read the results to the whole class, from first to last place. My humiliation was complete. Students can have very negative reactions towards tests and it's no surprise when they too may have had experiences like this. Why testing doesn't work Reasons for testing Making testing more productive Learning from tests Alternatives to testing Conclusions Why testing doesn't work There are many arguments against using tests as a form of assessment: Evaluating speaking For example, speakers need to pronounce individual sounds clearly, understand the functions of language, and follow the conventions of turn-taking. The second part of this article looks at whether these different elements can be evaluated formally, and what ways there are to do this. In the third part of this article we will look at how these competencies can be evaluated, with specific discussion of the IELTS speaking test. What speakers do Phonological features of speech Following the rules of language Paralinguistic devices Communicative functions Social meaning Conclusion What speakers do Speaking is a complex act with many different elements interacting to produce effective communication.

A Map of Languages Locallingual is an interactive map of languages and dialects around the world. You can click on the map to read the language(s) spoken within a country, province, state, or city. You can then click on the listed language(s) to hear words and phrases spoken by people who live in that area. It's a neat way to discover the differences in how a language is spoken from one region to the next. Applications for EducationLocallingual is a crowd-sourced project which means there are audio contributions from all kinds of people. Rather than directing your students to explore the site on their own, I would select some specific examples and play them for my students. Elizabeth: The Golden Age – Literary Elements A mature Queen Elizabeth endures multiple crises late in her reign including court intrigues, an assassination plot, the Spanish Armada, and romantic disappointments. 1.0) What is the point of view of the movie? 2.0) What is the plot of the movie?

This great site contains a mixture of classroom materials and other resources e.g. articles and reviews related to pronunciation and listening skills by charquis May 13

More than just pronunciation, but focus by joaozinhodeb Mar 16