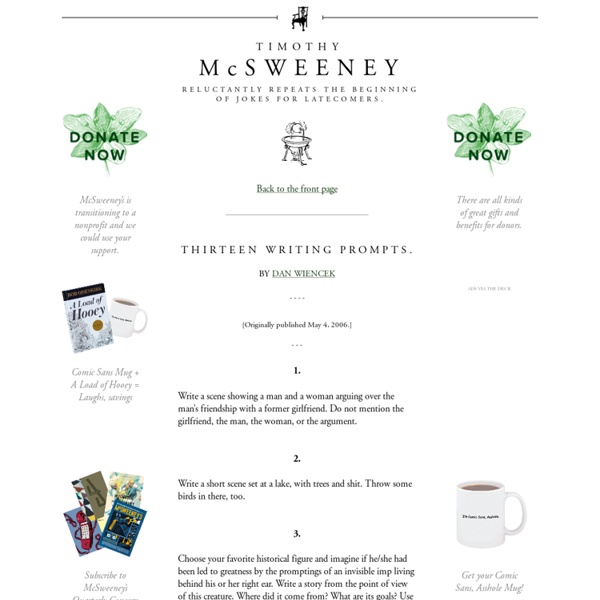 [Originally published May 4, 2006.] Write a scene showing a man and a woman arguing over the man’s friendship with a former girlfriend. Do not mention the girlfriend, the man, the woman, or the argument. Write a short scene set at a lake, with trees and shit. Throw some birds in there, too. Choose your favorite historical figure and imagine if he/she had been led to greatness by the promptings of an invisible imp living behind his or her right ear. Write a story that ends with the following sentence: Debra brushed the sand from her blouse, took a last, wistful look at the now putrefying horse, and stepped into the hot-air balloon. A wasp called the tarantula hawk reproduces by paralyzing tarantulas and laying its eggs into their bodies. Imagine if your favorite character from 19th-century fiction had been born without thumbs. Write a story that begins with a man throwing handfuls of $100 bills from a speeding car, and ends with a young girl urinating into a tin bucket.

Creative Writing Prompts Many creative writers use prompts to generate new material. Prompts can be challenges -- for example, write a story using only one syllable words or craft an alphabet story where the first sentence begins with the letter A, the next sentence B, and so on -- or themes provided by journals, or a poem to which an writer can respond. For example, the Sun lists prompts and deadlines every issue. To see responses, check out "Readers Write." For a list of up-to-date journal prompts, deadlines, and contest information, see the Writing Program's bulletin board in Jensen on the second floor.

Writing Exercises and Prompts for Journaling, Prose, Poetry and Memoirs These Writing Exercises are a collection of prompts originally published in The Journal Newsletter. The prompts include journaling prompts, prose prompts, poetry prompts, free writing prompts, and memoir prompts. Jump to the exercises you would like to see: Prompts Copyright © by Susan Michael and David Michael. 02 Know How to Write a Short Story I LOVED your golfing story. Read every word. You're a wonderful writer. (Peter Bowerman, the Well-Fed Writer) Big Things rule!

Creative Writing Prompts After weeks of secret detective work, partners Barbara and Nolan are on the verge of cracking the case. They’ve been posing as employees at a high-profile financial firm named MoneyMakers LLC., trying to prove that the CEO named (fill in the blank) has been ripping customers off. After hearing him say incriminating things into...

25 Writing Prompts - Carrie Elle Feeling a little writer’s block – or maybe just looking to stretch your writing muscles a bit? I was. And so, I googled “writing prompts” and found all kinds of random stuff. And then thought, I have some good ideas for prompts…I should just come up with my own. And so, I did just that. Some of them are silly, some of them are serious. Writing Challenge Generator Challenges The story must involve a crown in it. During the story, a character finds out a dark secret. During the story, there is a fight. A character reveals their feelings.

21 Harsh But Eye-Opening Writing Tips From Great Authors A lot of people think they can write or paint or draw or sing or make movies or what-have-you, but having an artistic temperament doth not make one an artist. Even the great writers of our time have tried and failed and failed some more. Vladimir Nabokov received a harsh rejection letter from Knopf upon submitting Lolita, which would later go on to sell fifty million copies. Sylvia Plath’s first rejection letter for The Bell Jar read, “There certainly isn’t enough genuine talent for us to take notice.” Gertrude Stein received a cruel rejection letter that mocked her style.

Ten Obvious Truths About Fiction The following essay was previewed in the class that Stephen Graham Jones taught for LitReactor, Your Life Story Is Five Pages Long. 1. The reader should never have to work to figure out the basics of your story. Who’s whose wife or husband, what the time period is if that matters, why these people have broken into this house, and on and on, just the basic, ground-level facts about your story. If you don’t relay that stuff up-front, as quickly and efficiently as possible (and please don’t be fancy), then your story becomes a game of three-card-monty, with you hiding information under this or that shell, trying to keep everything moving fast enough that nobody knows what’s going on. Which is to say your story becomes about the reading of the story, not the experience the story is trying to get the reader to engage.

Three Poetry Writing Exercises Stretch your writing muscles with these poetry writing exercises. If you’re going to exercise, it’s a good idea to warm up first. That way, you’ll get your body geared up to do the heavy lifting, the hard running, and the strenuous workout. Fifteen Writing Exercises Writing exercises are a great way to increase your writing skills and generate new ideas. They give you perspective and help you break free from old patterns and crutches. To grow as a writer, you need to sometimes write without the expectation of publication or worry about who will read your work. Don’t fear imperfection. That is what practice is for. Pick ten people you know and write a one-sentence description for each of them.

Writing Prompts 101 By Simon Kewin Even if you are not a professional writer you probably already heard about writing prompts. They represent a very effective tool for any writing project, so it’s a good idea to know how to use them. What Is A Writing Prompt? If you’re a fiction writer, you may want to consider using writing prompts to kick-start your creativity. 5 Interactive Fiction Authoring Tools EmailEmail If you want to get into writing Interactive Fiction (IF) it can be hard to know where to get started. So here is a list of five IF authoring tools so you can pick the approach that’s best for you. This is an update of a post I wrote way back in 2010.