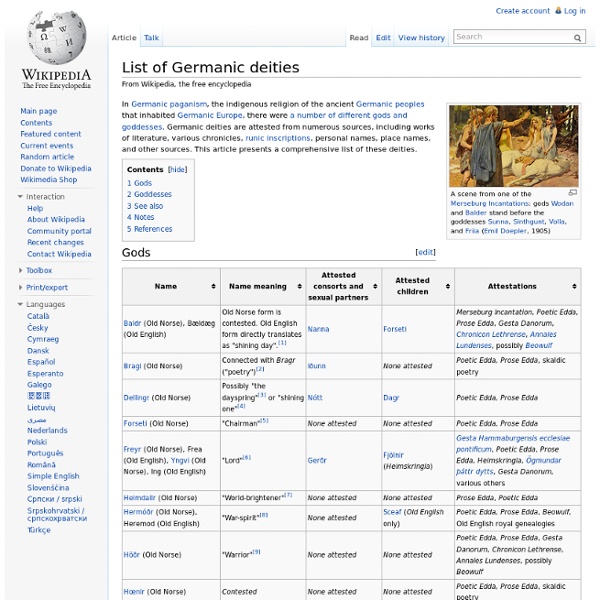 In Germanic paganism, the indigenous religion of the ancient Germanic peoples that inhabited Germanic Europe, there were a number of different gods and goddesses. Germanic deities are attested from numerous sources, including works of literature, various chronicles, runic inscriptions, personal names, place names, and other sources. This article presents a comprehensive list of these deities. Gods[edit] Goddesses[edit] See also[edit] Notes[edit] References[edit] Bellows, Henry Adams (Trans.) (1936).

List of deities This is an index to polytheistic deities of the different religions, cultures and mythologies of the world, listed by type and by region. This is not a list of names or epithets of gods in modern monotheistic religions, for which see "Names of God". For deified individuals see "List of people who have been considered deities", "Apotheosis" and "Imperial cult". For deities whose cult is fictional see "List of deities in fiction". Valhalla In Norse mythology, Valhalla (from Old Norse Valhöll "hall of the slain"[1]) is a majestic, enormous hall located in Asgard, ruled over by the god Odin. Chosen by Odin, half of those who die in combat travel to Valhalla upon death, led by valkyries, while the other half go to the goddess Freyja's field Fólkvangr. In Valhalla, the dead join the masses of those who have died in combat known as Einherjar, as well as various legendary Germanic heroes and kings, as they prepare to aid Odin during the events of Ragnarök.

Viking gods Odin Odin was the chief god in the Norse mythology, and the father of Thor, Balder, Hoder, Tyr, Bragi, Heimdall, Ull, Vidar, Hermod and Vali. His wives were Fjorgyn, Frigga and Rind. List of mythologies This is a list of mythologies of the world, by culture and region. Mythologies by region[edit] Africa[edit] Myth, Legend, Folklore, Ghosts Apollo and the Greek Muses Updated July 2010 COMPREHENSIVE SITES ON MYTHOLOGY ***** The Encyclopedia Mythica - SEARCH - Areas - Image Gallery - Genealogy tables - Mythic Heroes Probert Encyclopaedia - Mythology Gods, Heroes, and MythDictionary of Mythology What is Myth? A Clerk of Oxford: Medieval Terms of Endearment This is a sort of follow-up to my post on Medieval Compliments: or, How to call someone 'beautiful' in Middle English, which has proved surprisingly popular. Apparently a lot of people want to know that stuff; I like to imagine that there are now lovers all over the world praising each other in beautiful medieval English. To extend this a little bit, here's a collection of terms of endearment (loosely defined), mostly culled from the Middle English Dictionary. This is a complement (heh) to the other post, and so I won't repeat what I said there about such terms as leof and lemman, though they belong here too.

22 fascinating details you probably never noticed on Bruegel’s ’The Tower of Babel’ Nowadays it’s much easier to see famous paintings because you can just google them, but there are some paintings that require a particular approach. ’’The Tower of Babel’’ by Pieter Bruegel the Elder is one of them. This masterpiece was painted in 1563, and now to admire the original you need to visit the Kunsthistorisches Museum in Vienna. When we look at the painting it seems to us that we can see everything, but actually it’s not that easy! Bruegel is known and loved for his fancy for detail. With the permission of blogger Anton Afanas’ev, Bright Side wants to share his post to help you discover some details that aren’t that easy to notice at first gaze. ’’The Tower of Babel’’

Rune Converter: English Letters to Germanic Runes Converter The Rune Converter transforms Roman alphabet, as used in modern English, into five systems of Germanic runic writing: Elder Futhark, Anglo-Saxon runes, Long Branch Younger Futhark, Short Twig Younger Futhark and staveless or Hålsinge runes. Note that it does not translate the words themselves into Old Norse or any other language, it only converts letters into runes. Also note that the present converter works with modern English only. Letters with Old Norse (or any other) diacritics will not be converted into runes. What Types of Runes Are Supported? Elder Futhark is the most ancient Germanic runic alphabet that was in use from the 2nd to 8th centuries by all Germanic tribes.

Explore a Viking Village Explore a Viking Village Want to "walk" through a real Viking village? The sequences below from the NOVA film "The Vikings" offer a fascinating and unprecedented look at Birka, a medieval Viking village that archeologists recently excavated near modern-day Stockholm. The video clips come from footage that Swedish filmmakers Mikael Agaton and Lars Rengfelt shot of a 1:30 scale model of Birka now housed in the Museum of National Antiquities in Stockholm.

Norse clans - Wikipedia, the free encyclopedia The Scandinavian clan or ætt/ätt (pronounced [ˈæːtː] in Old Norse) was a social group based on common descent. History[edit] In the absence of a police force, the clan was the primary force of security in Norse society, as the clansmen were obliged by honour to avenge one another. The Norse clan was not tied to a certain territory in the same way as a Scottish clan, where the chief owned the territory. The land of the Scandinavian clan was owned by the individuals who had close neighbours from other clans.