6 Writers Who Broke the Rules and Got Away with It 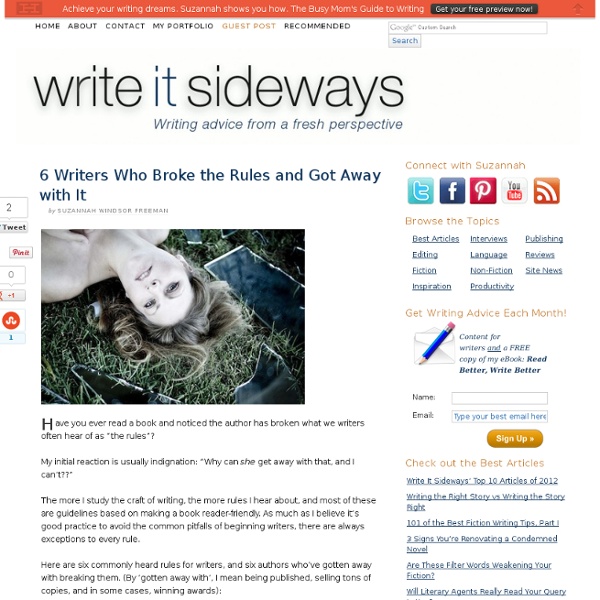 Have you ever read a book and noticed the author has broken what we writers often hear of as “the rules”? My initial reaction is usually indignation: “Why can she get away with that, and I can’t??” The more I study the craft of writing, the more rules I hear about, and most of these are guidelines based on making a book reader-friendly. As much as I believe it’s good practice to avoid the common pitfalls of beginning writers, there are always exceptions to every rule. Here are six commonly heard rules for writers, and six authors who’ve gotten away with breaking them. Rule: Don’t write in First Person, Present Tense Audrey Niffenegger, The Time Traveler’s Wife: Niffenegger’s popular title is told by dual narrators from the first person point of view, in the present tense. Rule: Keep your novel under 100,000 words Hilary Mantel, Wolf Hall: Literary agents keep telling us it’s nearly impossible to sell an overly long book, these days. Rule: Limit the use of adverbs.

9 Editing Tips that Make Your Writing Sparkle It’s often said that writing is rewriting. Banging out a quick first draft can be fun, but the real grunt work comes in revising your work. Here are nine editing tips that can help you polish your writing until it sparkles: 1. Read aloud When you become too familiar with a piece of writing, suddenly it’s more difficult to spot weaknesses and errors. 2. Better than just reading your work aloud is recording yourself (most computers have a voice recording program already installed). 3. Don’t write the last word of your first draft and then launch into editing mode straight away. 4. If your sentence makes sense without using a particular word, cut it. 5. “A passive construction occurs when you make the object of an action into the subject of a sentence,” says this university web resource. 6. Have you ever re-read a piece of your writing, only to find you’ve used the same word twice in the same sentence, or three times in the same paragraph? 7. 8. 9. Polished Writing

Short Stories: 10 Tips for Creative Writers Mythical Creatures List, Mythical Creatures A-Z Fantasy world Many fantasy worlds draw heavily on real world history, geography and sociology, and also on mythology and folklore. Plot function[edit] The setting of a fantasy work is often of great importance to the plot and characters of the story. The setting itself can be imperiled by the evil of the story, suffer a calamity, and be restored by the transformation the story brings about.[3] Stories that use the setting as merely a backdrop for the story have been criticized for their failure to use it fully.[4] Even when the land itself is not in danger, it is often used symbolically, for thematic purposes, and to underscore moods.[5] History[edit] Early fantasy worlds appeared as fantasy lands, part of the same planet but separated by geographical barriers. Even within the span of mere decades, Oz, which had been situated in a desert in the United States when first written about in 1900,[6] was relocated to a spot in the Pacific Ocean.[8] Common elements[edit] Constructed worlds[edit] Examples[edit]

A ton of useful information about screenwriting from screenwriter John August Color Words Colour Terms This list contains 168 definitions of obscure colour terms using combinations of 'normal' colours of the rainbow and descriptive adjectives; e.g. cardinal = deep scarlet red; russet = reddish brown. Note that most English speakers outside the U.S. spell colour with the added British 'u' rather than the American version color. Don't worry if the colours (or colors) in your universe don't match up with the definitions I've given for these words, though - I've been known to have skewed perceptions of reality ... I hope you have found this site to be useful.

Fantasy: Getting Started By Sandra C. Durham © 2003, Sandra C. his is a newcomer’s guide on how to get started in the genre of fantasy writing, from one newcomer to another. Writing fantasy, whether in the form of short stories or novels, does not necessarily follow a set pattern or formula. Contemporary and Urban Fantasy – Stories taking place in the real world, but with an element of magic or fantasy. The best approach to writing in any genre is to know your field. Once you have your book collection, read them carefully. A next logical step in progressing as a new fantasy writer might be to pick up a few good books on the subject. How to Write Science Fiction and Fantasy by Orson Scott Card The Writer’s Complete Fantasy Reference, from Writers Digest Books. The first book gives an overview of the field from a writing perspective. A critical step in writing fantasy is a concept called world building. Each step in the world building process is crucial to providing a cohesive background to your story.