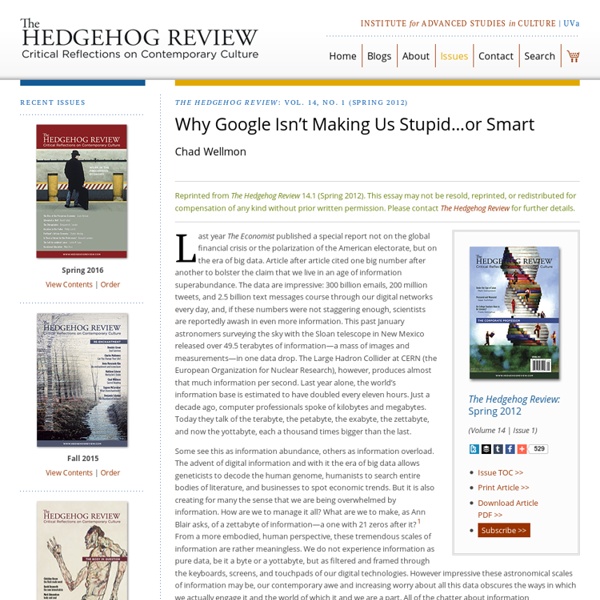 The Hedgehog Review: Vol. 14, No. 1 (Spring 2012) Reprinted from The Hedgehog Review 14.1 (Spring 2012). This essay may not be resold, reprinted, or redistributed for compensation of any kind without prior written permission. Please contact The Hedgehog Review for further details. Last year The Economist published a special report not on the global financial crisis or the polarization of the American electorate, but on the era of big data. Some see this as information abundance, others as information overload. The more pressing, if more complex, task of our digital age, then, lies not in figuring out what comes after the yottabyte, but in cultivating contact with an increasingly technologically formed world.2 In order to understand how our lives are already deeply formed by technology, we need to consider information not only in the abstract terms of terrabytes and zettabytes, but also in more cultural terms. Two Narratives Too Many Books Enlightenment Reading Technologies Endnotes

The Rust Belt of France: Montpellier My wife and I have been living in France for the past nine months in a city near the Mediterranean coast. But it’s not quite what you think. It’s not Paris, or the French Riviera, or some quaint little town surrounded by vineyards in the countryside. We live in Montpellier, the largest city in France’s poorest region, the Languedoc-Roussillon, which has the highest jobless rate in a country that just hit a twelve-year high for unemployment. In other words, we live in the Rust Belt of France. Before we moved here we had, like most Americans, imagined France to be a place of bustling outdoor cafés, sprawling esplanades, grands chateaux, fois gras, and day-drinking. But there’s another France down here in the Languedoc-Roussillon that permeates our idyllic France. If you’re able to look past all its problems, though, Montpellier itself is a lovely city — one of the best in the south of France. And then we got here. It didn’t work. Every Sunday in Mosson there’s a sprawling flea market.

Tehran Politics: Are the Mullahs Losing Their Grip? “You are not a wise man, you tyrant,” raps the Iranian female singer Bahar. “Why do your clothes smell like blood? . . . Why do you crush this cry for justice? The people don’t deserve such disdain.” Her chiding words against Supreme Leader Ayatollah Ali Khamenei go to the heart of the problem that the Islamic Republic faces: the growing illegitimacy of a cruel and inaccessible theocracy whose control over Iran might well be slipping. Throughout Iran’s history, political power has clustered around strongmen—often shahs or kings until the Islamic revolution of 1979—rather than institutions. As the executive center’s authority has grown, the president and his supporters have come to believe that the “period of religious politics will soon be over” (in the words of Ahmadinejad’s controversial and secularist chief of staff Esfandiar Rahim Mashaei), leading them to hazard acts of increasing independence from the theocrats in both domestic and foreign affairs. Related Essay Jamsheed K.

Wang Hui · The Rumour Machine: The Dismissal of Bo Xilai · LRB 10 May 2012 ‘March 14’ used to be shorthand in China for the 2008 unrest in Tibet; now it stands for the 2012 ‘Chongqing incident’. It is unusual for municipal policy to have national impact, and rarer still for the removal of a city leader to become international news. Some observers have argued that the dismissal of Bo Xilai, the party secretary of Chongqing, is the most important political event in China since 1989. Stories began to circulate on 6 February, when Wang Lijun, Chongqing’s police chief, fled to the US consulate in the nearby city of Chengdu. Neither the Chinese nor the American authorities have revealed anything about what followed, the US saying only that Wang had an appointment at the consulate and left the next day of his own accord. Since then he has been in the custody of the Chinese government. As the stories multiplied, two main interpretations emerged. Both interpretations, one denying, the other privileging the political character of the Chongqing events, are partial.

Behold The Forbidden Flu: A Loom Explainer | The Loom Here, for your viewing pleasure, is a very important part of a very special flu virus. It may look like an ordinary protein, but in fact it’s been at the center of a blazing debate about whether our increasing power to experiment on life could lead to a disaster. Not that long ago, in fact, a national security advisory board didn’t even want you to see this. So feast your eyes. For those who are new to this story let me start back at the beginning, in 1997. In that year, a child in Hong Kong died of the flu. Each year, several different flu strains circulate from person to person around the world. Birds are the source of all our flu strains. That’s why the scientists in 1997 were so flustered. It turned out that around Hong Kong, chickens were rife with H5N1, including the chickens for sale in live open-air markets. Doctors found that the majority of patients hospitalized with H5N1 died. Yet some flu experts doubted this grim prospect. Fauci replied by calling that idea “preposterous.”

Tokyo through the letterbox | Spike Japan Reams have been written about the suicide-as-spectacle of novelist Yukio Mishima’s death; less, perhaps, about the cartographies and circumstances of his birth. He was born Kimitake Hiraoka, on January 14, 1925, the first child of a civil servant, of a family of what would once—then, indeed—have been called “very good stock”, and his wife, of a family of Confucian and Chinese scholars, in Yotsuya, once on the fringe but now already in the heart of a Tokyo that was rapidly expanding and shifting its center of gravity westward, in a district known then as Nagasumi-cho (永住町, “long dwell town”, although he would be gone from the neighborhood by the age of eight) but which was reorganized and renamed Yotsuya 4-chome in a municipal redistricting on April 1, 1943 (one would have thought they would have had better things to do), before being pulverized to smithereens by American air-raids less than two years later. 私の家は殆ど鼻歌まじりと言いたいほどの気楽な速度で、傾斜の上を辷りだした。 坂を下りて来たのは一人の若者だった。 He was right.

Consuming Women The first lap dancing club in the UK opened in 1995. Since then lap dancing has become part of mainstream culture, with the 300+ lap dancing clubs nationwide visited by well-known figures such as Stephen Hawkings and Rihanna. Jennifer Hayashi Danns, 28, worked as a lap dancer for two years whilst studying at university. She spoke to Ian Sinclair about the industry and her new book Stripped: The Bare Reality of Lap Dancing, which she co-authored with Sandrine Leveque from feminist campaigning group OBJECT. What factors have driven the rapid increase in lap dancing clubs in the UK? Many feminist groups believe that the rise in lap dancing clubs is related to a piece of legislation that allowed lap dancing clubs to open under the same licensing regulations as cafes or karaoke bars. The lap dancing industry and parts of the media present lap dancing clubs as harmless, safe, titillating entertainment akin to visiting a nightclub. What do you propose as a solution to the current status quo?

Khrushchev in Water Wings: On Mao, Humiliation and the Sino-Soviet Split | Past Imperfect Khrushchev and Mao meet in Beijing, July 1958. Khrushchev would find himself less formally dressed at their swimming-pool talks a week later. The list of things that Nikita Khrushchev would never be and could not do was long; some of them would change history. Explaining why Khrushchev’s prowess in the pool mattered means explaining Khrushchev. On compromise “If you cannot catch a bird of paradise, better take a wet hen.” Reported in Time, January 6, 1958 On politics “Politicians are the same all over. Reported in the New York Herald Tribune, August 22, 1963 On the economy ‘’Economics is a subject that does not greatly respect one’s wishes.” Reported by J.K. On superpower relations “If you start throwing hedgehogs under me, I shall throw a couple of porcupines under you.” Reported in the New York Times, November 7, 1963 On revolution “If we could promise people nothing better than revolution, they would scratch their heads and say, ‘Isn’t it better to have good goulash?’ Sources Neil Ascherson.

Don't Like the Message? Maybe It's the Messenger - Justin Fox by Justin Fox | 11:29 AM May 4, 2012 We all like to think we can evaluate information and arguments rationally, regardless of where they come from. But we don’t. As Yale Law School’s Dan Kahan, who has studied this stuff a lot, puts it: People feel that it is safe to consider evidence with an open mind when they know that a knowledgeable member of their cultural community accepts it. When the information seems to be coming from or favoring the other side, all bets are off. In a famous 1950s psychology experiment, researchers showed students from two Ivy League colleges a film of an American football game between their schools in which officials made a series of controversial decisions against one side. To which I can only add that, although I know nothing about the 1951 Dartmouth-Princeton game other than what I’ve read in the cited article, I’m confident that if anything the refs went far too easy on Dartmouth. This was brought home by an experiment I inadvertently unleashed last week.

Gaseous emissions from dinosaurs may have warmed prehistoric earth Sauropod dinosaurs could in principle have produced enough of the greenhouse gas methane to warm the climate many millions of years ago, at a time when the Earth was warm and wet. That's according to calculations reported in the May 8th issue of Current Biology, a Cell Press publication. The hulking sauropods, distinctive for their enormous size and unusually long necks, were widespread about 150 million years ago. As in cows, methane-producing microbes aided the sauropods' digestion by fermenting their plant food. "A simple mathematical model suggests that the microbes living in sauropod dinosaurs may have produced enough methane to have an important effect on the Mesozoic climate," said Dave Wilkinson of Liverpool John Moores University. Wilkinson and study coauthor Graeme Ruxton from the University of St Andrews were studying sauropod ecology when a question dawned on them: If modern cows produce enough methane gas to be of interest to climate scientists, what about sauropods?

Adam Yauch and Paul’s Boutique: How dumb court decisions have made it nearly impossible for artists to sample the way the Beastie Boys did Frazer Harrison. The death on Friday of Adam Yauch, best known as the Beastie Boys’ MCA, surely sent many of us back to old albums we may not have heard for a while. And anyone who threw on Paul’s Boutique, the Boys’ best album, was surely struck by the sense that they don’t make records like that anymore. Perhaps the main reason—and certainly the saddest reason—that it still sounds distinctive is that a rapidly shifting legal and economic landscape made it essentially impossible to repeat. In the late 1980s, sampling occupied a legal gray area. Hip-hop sampling began as a live technique, with DJs working turntables at parties and clubs. 1990 saw the release of both M.C. In the specific cases of “U Can’t Touch This” and “Ice, Ice, Baby,” paying off the original artists seems like a fair outcome. After the legal turmoil, record companies didn’t want to expose themselves to copyright risk.