The Hodges Meteorite. Most space debris simply burns up in the atmosphere long before it can ever make earthfall. 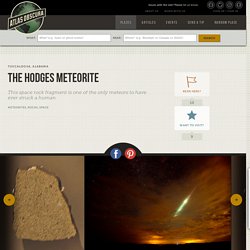 But every so often a lucky meteor makes it through the fire, but only a few times in recorded history has such a missile ever hit a human being. The Hodges Meteor is not remarkable for its size or shape, but after careening through an Alabama woman's house and hitting her while she napped, it went down in history. At two in the afternoon on November 30, 1954 Ann Hodges had just settled into a nap on her couch when a meteorite, which would come to be known as Sylacauga (fallen meteors are usually named after where they land) rocketed through the roof.

The space bullet bounced off the massive radio cabinet and slammed right into Hodges' side like something off of Astronomy's Funniest Home Videos. Amazingly Hodges was only bruised, but the real violence was yet to come. As it turns out, meteors are pretty much space gold and ownership of the mineral came into question almost immediately. Hoba Meteorite near Grootfontein, Namibia. Kaali Meteorite Crater Field. Henbury Meteorites Conservation Park. Approximately 4,700 years ago, a meteor racing through the Earth's atmosphere split into several pieces -- most no larger than a 2 liter fuel drum -- and slammed into the middle of Australia. 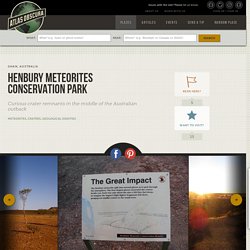 The meteorite pieces, which reached speeds of 40,000 km per hour, created twelve craters that are still visible today. Though most of the craters have eroded and become lined with plantlife, their footprints create an interesting diversion from the surrounding flat Australian desert landscape. A 1.5 km path winds around the largest craters, which are best viewed at sunset and sunrise. Today, the area is a protected reserve, with rustic camping facilities available. Visitors can expect only long drop toilets and fire pits, and all water and firewood must be brought into the reserve. Map/Directions Map Data Map data ©2016 GBRMPA, Google Map Satellite The Reserve is easily accessible by both 2WD and 4WD. Meteor Crater. 50,000 years ago, give or take, a meteorite came screaming from the sky and slammed into the Earth. 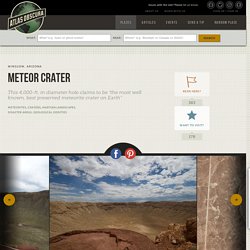 The scar it left across the Arizona landscape is now a popular tourist attraction, complete with wreckage from daredevil pilots that flew too low. While it's known simply as "Meteor Crater" to most, scientists refer to it as "Barringer Crater" after Daniel Barringer, the man who first suggested that the giant hole was made by a flying space rock. Barringer was a mining engineer, and his business, Standard Iron Company, staked claim on the property. In 1903, along with his partner, mathematician and physicist Benjamin Chew Tilghman, Barringer conducted land surveys and collected documentation supporting his meteor theory. Despite his efforts, he was met with skepticism and disbelief from the scientific community. Planetary science didn't mature enough for geologists to swallow Barringer's impact theory until the '50s and '60s. Wolfe Creek Crater. Upheaval Dome. For decades, two theories about the formation of Utah’s Upheaval Dome jostled for supremacy. 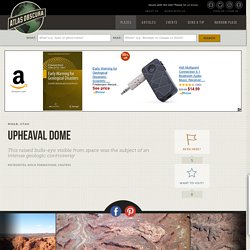 The geological formation in question is three miles across and roughly circular in shape. World's third largest asteroid impact zone found in South Australia. An asteroid measuring up to 20km across hit South Australia up to 360 million years ago and left behind the one of the largest asteroid impact zones on Earth, according to new research published today. 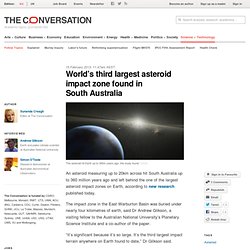 The impact zone in the East Warburton Basin was buried under nearly four kilometres of earth, said Dr Andrew Glikson, a visiting fellow to the Australian National University’s Planetary Science Institute and a co-author of the paper. “It’s significant because it’s so large. It’s the third largest impact terrain anywhere on Earth found to date,” Dr Glikson said. “It’s likely to be part of a particular cluster that was linked with a mass extinction event at that time.” Dr Glikson published his findings in a paper in the journal Tectonophysics, co-authored by ANU colleagues Dr John Fitzgerald and Dr Erdinc Saygin and by the University of Queensland’s Dr Tonguc Uysal. 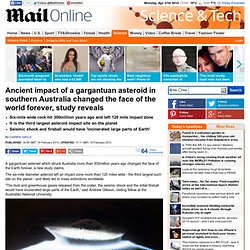 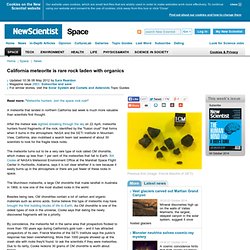 After the meteor was sighted streaking through the sky on 22 April, meteorite hunters found fragments of the rock, identified by the "fusion crust" that forms when it burns in the atmosphere. NASA and the SETI Institute in Mountain View, California, also mobilised a search team last weekend of about 30 scientists to look for the fragile black rocks. The meteorite turns out to be a very rare type of rock called CM chondrite, which makes up less than 1 per cent of the meteorites that fall to Earth. Bill Cooke of NASA's Meteoroid Environment Office at the Marshall Space Flight Center in Huntsville, Alabama, says it is not clear whether it is rare because it easily burns up in the atmosphere or there are just fewer of these rocks in space. More From New Scientist Space elevator trips could be agonisingly slow (New Scientist)

Collision Course: A Brief Guide to Earth’s Most Interesting Impact Craters. A Norwegian family arrived at their cabin to open it up for the spring and found a surprise: a large rock had smashed through the roof. It was identified as a 1.3 pound breccia meteorite. It didn't hurt anybody, and its sale price should easily cover the damage to the roof; meteorites are valuable to collectors. But although most meteorites are very small, and to date nobody has been more than bruised by one, some of them are big and make a violent impression where they hit.

Here are a few of the more interesting impact craters around: Barringer Crater, Arizona, USA. The oldest and 'biggest ever' asteroid crater discovered in Greenland - suggesting huge impact more than three billion years ago. 100km (62mile) wide crater discovered in Greenland - and it is possible crater is more than 500km in size By Eddie Wrenn Published: 15:42 GMT, 29 June 2012 | Updated: 16:30 GMT, 29 June 2012 A 100 kilometre-wide crater has been found in Greenland, the result of a massive asteroid impact a billion years before any other known collision on Earth. 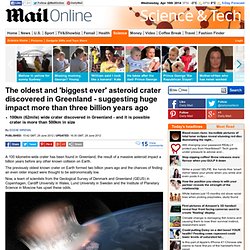 The previously oldest known crater on Earth formed two billion years ago and the chances of finding an even older impact were thought to be astronomically low.