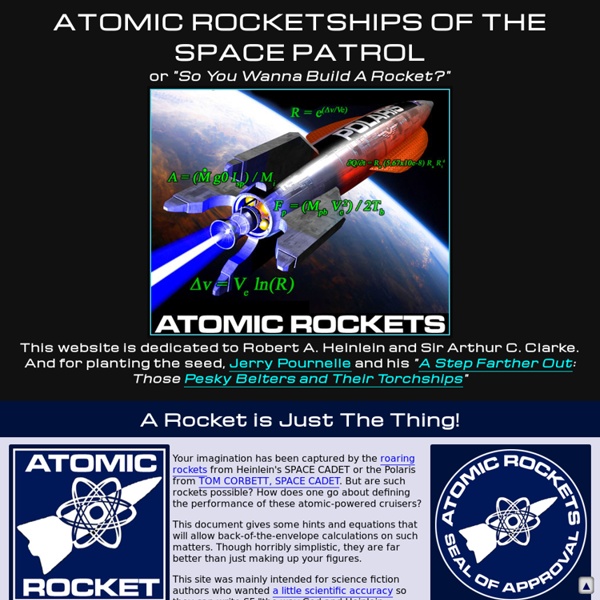 Your imagination has been captured by the roaring rockets from Heinlein's SPACE CADET or the Polaris from TOM CORBETT, SPACE CADET. But are such rockets possible? How does one go about defining the performance of these atomic-powered cruisers? This document gives some hints and equations that will allow back-of-the-envelope calculations on such matters. This site was mainly intended for science fiction authors who wanted a little scientific accuracy so they can write SF "the way God and Heinlein intended" (Arlan Andrews's Law). The engine and the torchship pages explain how easily do some of the calculations using Nomograms. . While this site originally focused on rocketry equations, as you can see it has grown to encompass other topics of interest to SF authors and game designers.

Bad Astronomy - Slate A new paper just published in the prestigious Astrophysical Journal makes a stunning claim: There are 10 times as many galaxies in the Universe as we previously thought. At least. The total number comes in at about 2 trillion of them. Now, let me be clear. What the astronomers did was look at extremely deep images of the Universe taken in surveys, for example the Hubble Ultra Deep Field. That’s a lot of galaxies. Surveys like the UDF are limited. The astronomers who did this research had an interesting problem. The answer is two-fold. Those numbers change with distance. At the same time, these faint galaxies are easier to see close to us, and harder farther away. They calculated this for all kinds of galaxies, right down to really small ones with about a million times the mass of the Sun. They can then combine these two pieces of information: How many faint galaxies there are near us and how bright they are, with how many galaxies of a given mass are in a volume of space. NASA,ESA, H.

Grist | Environmental News, Commentary, Advice Geeks are Sexy Technology News | tech, science, news and social issues for geeks Climate Depot | A project of CFACT Pharyngula Probably not. But the New York Times reports: A review of studies has found that the health benefits of infant male circumcision vastly outweigh the risks involved in the procedure. Actually, it doesn’t. Prevalence of adult circumcision in the United States during the past 6 decades (1948-2010). It does toss in a table purporting to show the tremendous risks of not circumcising baby boys, but this is not new — these are the same sloppy data that the author has been peddling for over a decade. The author is Brian Morris, better known as the Man Who Hates Foreskins. I suppose it could be because glorious Scandinavian penises are perfect and universally wholesome — that’s what I’ve been told, anyway — but that would be baseless speculation and unwarranted extrapolation of anecdotes into unsupportable evidence, of the sort that Brian Morris does. Take that first condition, the likelihood of urinary tract infections. Or look at his claim of much greater rates of HIV infection.