Teach Kids To Be Their Own Internet Filters 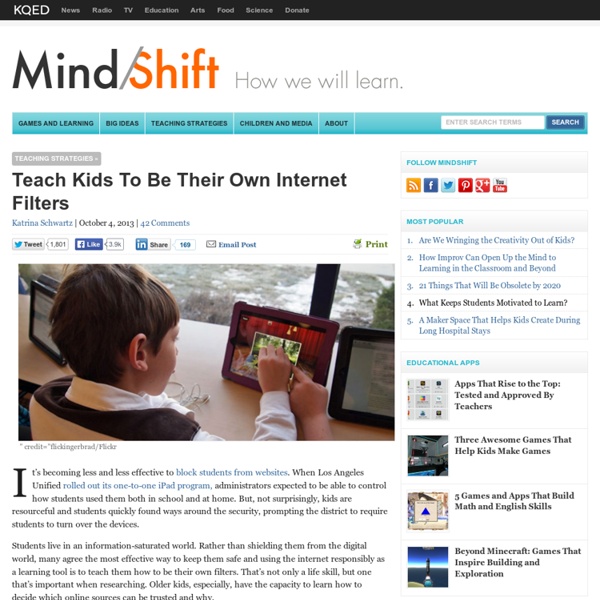 Q&A: Sheryl Grant on Grand Experiments in Learning and Assessment 9.10.13 | Sheryl Grant is director of social networking for the HASTAC/MacArthur Foundation Digital Media and Learning Competition. This is part of a series of conversations with thought leaders on digital media and learning, then and now. In conversation with journalist Heather Chaplin, leaders reflect on how the field of digital media and learning has changed over time, and where it’s headed. Spotlight: How did you get involved in this world? What made you interested in HASTAC? Sheryl Grant: I was finishing my master’s degree in information science and in a job that felt very ed-tech. So what happened to take you out of that? I started working for HASTAC in 2008. Can you tell me something specific about what was going on at HASTAC that felt so different to you? She said, “You can’t fail because it’s never been done before.” I was inspired by this sense that we were building new things and thinking about them in new ways. What do you do as director of social networking? Yes.

Five Steps to Responsibly Search for Images for Digital Projects Pages This Blog Linked From Here My Blog List Wednesday, August 20, 2014 Five Steps to Responsibly Search for Images for Digital Projects at 2:04 PM Email ThisBlogThis! Labels: creative commons, infographic, webtools No comments: Post a Comment Older PostHome Home - 21st Century Skills Toolkit - LibGuides at Monterey Public Library The students, for the most part, paid attention; however, before the presentations I would ask them if they liked free food? I let them know that at the end of the presentation, we were going to play a game to see how well they paid attention to me. This got the kids going. At the end of the presentation, we played Jeopardy which included categories that coved each topic I talked about. I found is that there was always at least one kid on each team who paid enough attention to know how to FIND the answers the team didn't know by looking at the resources I provided. Overall, visitng the school and doing the presentations is a positive experience that helps build a relationship bewteen the Teen Librarian, the students, and the teachers.

Join free Google Hangout July 30: Revisiting CIPA 10 Years Later The American Library Association (ALA) and Google, Inc., will host national library, education, technology, legal and policy experts for a national symposium considering the impact of the Children’s Internet Protection Act (CIPA) on access to electronic information July 29 and 30. Librarians nationwide can join the virtual conversation with two Google Hangouts on July 30. The first Hangout will start at 11:00a.m. “Revisiting the Children’s Internet Protection Act: 10 Years Later” is part of ALA’s Office for Information Technology Policy (OITP) and Office for Intellectual Freedom’s (OIF) larger project on CIPA and access to information, made possible through support of Google, Inc. Here’s how to join the conversation: You can watch the live stream directly on YouTube on the ALA Washington Office channel ( Participants are encouraged to actively share their experiences, reflections and questions via tweets and online comment boards.

ITL Research (Digital) Information Literacy – Top 10 Tips for Parents and Teachers Explain that not everything on the internet is trueAsk your child/student to compare information from different sites when doing research. Some sites may be biased or have a political agendaTrustworthy sites may be associated with trustworthy organisationsQuestion what you read and look for other opinionsUse keywords when searching the web to make your search more accurate. Do not just type a question – select the most important wordsWhen searching for websites and images etc try refining the search using the search tools so you are more likely to find what you want. These options are just underneath the Google search barEncourage your child/student to read the whole article or pageInformation should not just be copied and pasted. It needs to be read, understood, digested and questionedEncourage your child/student to use well known sources.

School Evolutionary Stages | The concept of common global school evolution HBO Still Doesn't Get It: Game of Thrones Again the Most Torrented Show | Underwire Photo: Helen Sloan/HBO Three seasons in and Game of Thrones still continues to set records — both legitimate and otherwise. After hitting ratings milestones earlier this year, it now has yet another accomplishment to boast about: the most pirated show of 2013. This latest honor comes via TorrentFreak, which found that the Season 3 finale of the show had 5.9 million downloads via BitTorrent, beating other shows like Breaking Bad and The Walking Dead by large margins. It’s not that HBO doesn’t acknowledge the volume of torrenting taking place. For the last decade evidence has mounted that, while some measure of media piracy is inevitable, it thrives on inconvenience: given the means, viewers will generally pay for a legitimate source, but only if they can get to it more easily than an illegal one. With a show like Game of Thrones, the impetus to piracy is twofold. This is the reality of the river that HBO is riding.

Banned Websites Awareness Day To raise awareness of the overly restrictive blocking of legitimate, educational websites and academically useful social networking tools in schools and school libraries, AASL has designated one day during Banned Books Week as Banned Websites Awareness Day. On Wednesday, September 30, AASL asks school librarians and other educators to promote an awareness of how overly restrictive filtering affects student learning. Background | Complimentary Webinars | Resources & Activities Logo Use | Promotional Partners Background Usually the public thinks of censorship in relation to books, however there is a growing censorship issue in schools and school libraries – overly restrictive filtering of educational websites reaching far beyond the requirements of the Children’s Internet Protection Act (CIPA). Filtering websites does the next generation of digital citizens a disservice. Resources Intellectual Freedom related posts on Knowledge Quest AASL White Paper on Educational Technology in Schools